New Raptors wing DeAndre Bembry wears No. 95 in honour of his late brother

TAMPA, Fla. — A week before the 2016 NBA draft, DeAndre Bembry's brother was shot and killed in their hometown of Charlotte. Bembry went 21st overall to Atlanta in that draft, and he has worn No. 95 in memory of his brother Adrian Potts ever since.
Dec 2, 2020 3:44 PM By: Canadian Press 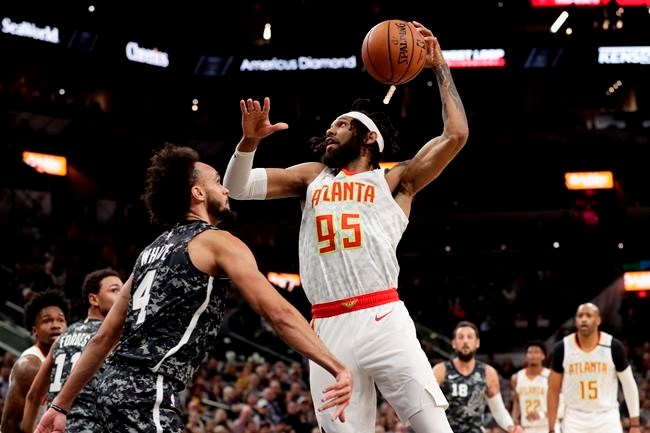 TAMPA, Fla. — A week before the 2016 NBA draft, DeAndre Bembry's brother was shot and killed in their hometown of Charlotte.

Bembry went 21st overall to Atlanta in that draft, and he has worn No. 95 in memory of his brother Adrian Potts ever since.

"I was just trying to figure out something for myself to keep his name around, and something just clicked in my head, the year he was born, which was 1995," the new Toronto Raptors wing said on a Zoom call Wednesday. "I thought that was just perfect for me, my family, it was something for us to look forward to.

"Just something I need to have with me."

Potts was one of several people shot outside an apartment in Charlotte, and was just 20 when he died.

The 26-year-old Bembry, who went six spots before Pascal Siakam in the 2016 draft, signed a two-year deal for the veteran minimum with Toronto. The six-foot-five player spent four seasons with Atlanta, and in 2018-19, his best year, he averaged 8.4 points and 4.4 rebounds a game.

Bembry was asked if he had any good Vince Carter stories, since the two were Hawks teammates.

"I've got so many," Bembry said of the former Raptors superstar. "The crazy thing is, he was my favourite player, so it was pretty dope the first year that he came over and I got to just build that bond with him, and got to realize the person that he was. He was just down to earth."

Bembry finds it funny how Carter, at 43, can still dunk better than him.

"Just seeing, after practice, him being able to still windmill and watch him do dunks that I've watched him do over the years, that's just one of the best stories I can think of, to be honest," he said.

Bembry believes the Raptors are a good fit.

"Just the character of the organization, I've always enjoyed watching, always enjoyed playing against them. Just those minor things, on the court and off the court," he said. "I love the competition, obviously. These guys know how to win, and that was probably the biggest thing that attracted me, they play winning basketball.

"I love to play team basketball and I see myself being able to fit in this group very easily."