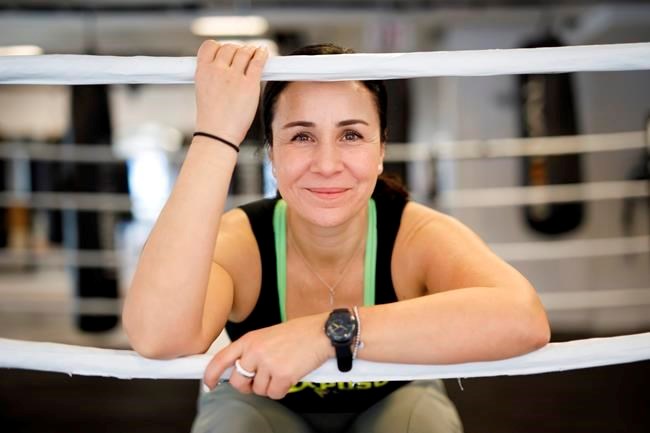 TORONTO — Yvette Raposo believes boxing is the perfect blend of beauty and brutality.

"The beauty we see, for those of us in boxing, is its art form — the strategy, the dancing, the footwork, the exchange between two bodies, the reaction, because for every action there's a reaction," said Raposo, who is a vocal advocate for the benefits of boxing as a lifestyle.

The boxing ring has been Raposo's virtual home for the past 22 years. And it's now the platform for a varied career she's chiselled out as a female pioneer in the sport.

The former boxer-turned-trainer is now also Canada's only female ring announcer, a role once reserved for rumbling-voiced men. She'll be on the mic Saturday for a United Boxing Promotions pro event in Brampton, Ont.

The 43-year-old Raposo discovered boxing when she was working as a personal trainer. Competitive opportunities were limited back then — women's boxing wasn't added to the Olympic program until 2012.

She turned to training, and started a business teaching boxing for fitness.

About five years ago, Raposo ran into her former coach Everton McEwan, who's also a promoter, and he asked her to be his ring announcer for an upcoming event.

Combat sports are unique in that announcers are sometimes bigger stars than the athletes. Michael Buffer's famous catchphrase "Let's get ready to rumble!" has transcended the sport. The ring is their stage.

"But I had no theatre training, no stage training, no background. What I did have going for me, is that I felt comfortable in the ring," Raposo said. "Otherwise I was incredibly nervous, probably even more so than I was when I fought back in the day."

She signed up for improv classes, storytelling courses and voice lessons, and learned to develop her own style.

And in a sport where female role models are few and far between, she likes David Diamante, who's famous for his long dreadlocks and repetition of surnames. She calls Montreal's Pierre Bernier a mentor, and "incredible source for me to tap into." And American Jeremiah Gallegos "is doing amazing work on the circuit."

Amy Hayes, who started as a "ring card girl," is now the most notable woman in the business. Known as "Lady of the Ring," Hayes was recently inducted into the National Boxing Hall of Fame in the U.S.

"If you Google, there are some women doing some amateur shows," said Raposo, whose mom Fernanda, a fashion designer, helps design her outfits. "But I'm always looking, and I've asked my network if anybody knows of any other women doing this — nope."

But Raposo's love for the sport stretches beyond the competitive ring. Sitting ring side at the United Boxing Club in west Toronto, the well-muscled Mississauga, Ont., native listed off the benefits of boxing, circling back to the beauty of the sport.

"What's beautiful to me is to see somebody feel empowered, is for somebody to break down emotional barriers, mental blocks, and when they can tap into what's inside of them," Raposo said. "I see on an everyday basis, the alignment happening with my clients where they come to me for physical reasons, but they leave with better alignment in self."

A good fighter, she said, is always fight-ready.

"So I step out of my front door as if I'm stepping into a boxing ring. Because life is like a boxing match. And you never know who your opponent is going to be. Sometimes our worst opponent is ourselves, and the stories that we tell ourselves. Boxing helps to align that because when you're training in boxing, you're focused on that second, in that moment, and it's a very personal experience."

Moving the body has proven mental health benefits, and boxing is no different. There's an "amazing stress release" that happens when the body connects with the bag.

"And boxing as a sport might turn people off because it looks brutal, because it looks violent," she said. "But if you speak to any boxer, or athletes who practises boxing training, we are the most calm, humble and confident people you will meet."

"Everybody wants to imagine themselves as a fighter, everybody at some point in their life imagines themselves beating somebody up, right?"
she said. "How many times do I tell people what I do and they say, 'I've always wanted to try boxing.' But people don't know what to do with that feeling.

"I'm not saying go and beat people up, but just knowing that you can, you walk differently down the street. I guarantee you, if you walk down the street like a fighter, that bully is going to think twice, because your body language is not what they're looking for. And this translates into your everyday life where when you can think like a fighter and feel like a fighter within. This is not about violence. This is about channelling your power. And knowing that if you had to, you can drop somebody with your left hand."