SASKATOON — Emmarae Dale says it was surreal when she put on a bright blue jersey and walked onto the football field to practice with the Saskatoon Hilltops.
Sep 16, 2020 5:25 PM By: Canadian Press 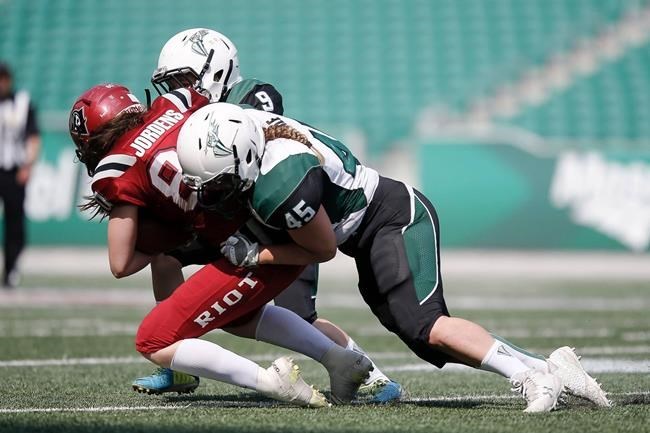 SASKATOON — Emmarae Dale says it was surreal when she put on a bright blue jersey and walked onto the football field to practice with the Saskatoon Hilltops.

The first woman to suit up for the Canadian Junior Football League is a 21-year-old linebacker who stands just over 5-6. She was raised with a love for the sport and an attitude to take on challenges.

"These are guys that I watched growing up and I always thought of as big, cool strong guys," Dale said Tuesday, after completing three practices with the team.

"Being part of that was a pretty humbling moment."

The Hilltops have 19 national titles, the most of any team in the league. Two of Dale's older brothers have previously played on the team.

Throwing the ball around their Saskatoon neighbourhood was a big part of their childhood, said Dale. She got into flag football in high school, where a coach connected her with the Saskatoon Valkyries, the first women's tackle football team in the city.

On the field, Dale said she knew she was exactly where she was supposed to be.

She helped that team win the Western Women's Canadian Football League title in 2016 and 2019.

Dale began working at the Ignite Athletics training facility, where the Hilltops train, after completing a kinesiology degree. Earlier this year, she was approached by the Hilltops coach and asked if she would be interested in coming out to train with the team.

Dale said she never thought that would be an option for her. So she had to sign on.

"I have watched Emmarae grow into a dominant football player with the Saskatoon Valkyries," said Jeff Yausie, defensive co-ordinator for the Hilltops and a former Valkyries head coach.

Dale has great quickness, strength and athleticism that will be a good contribution to the team, he said in a statement.

"She has a great attitude, and no one works harder than her."

Tom Sargeant, the Hilltops head coach, also said in a statement that Dale has a great work ethic and brings physical elements to her play.

The COVID-19 pandemic put the season on pause. Most players can only compete until they are 22, but Dale has had her eligibility extended by the league so she can participate in the 2021 season.

For now, that means hitting the field for practice with her teammates.

"They've taken me on as one of their own and nobody is treating me any different. I'm just like one of the guys on the team," she said. "Nobody is taking it easy on me, nobody is making it difficult."

Dale said there are some differences —  such as the size of her teammates. But she knows she has some advantages, like speed and manoeuvrability, too.

"It doesn't matter the size you are, just the size of your heart. That's what I'm putting into the plays going forward."

Dale said she hopes to become a better player during her time with the Hilltops. She then wants to take those skills to the women's national team, hopefully competing for Canada on the world stage when those tournaments resume.

In many professional sports, there aren't an abundance of opportunities for women athletes. Players in the Women's National Basketball Association in the United States and the U.S. women's national soccer team have been publicly arguing for better pay and contracts in recent years.

There's also been a slow growth when it comes to women's full-contact professional football leagues. Some Canadian players are choosing to move to the U.S. for the opportunity to join a paying league there — although it's nowhere near the level in the men's sport.

Dale said donning the Hilltops jersey will show all fans the value women bring sports. And she understands the example she is setting for young girls who hope to succeed in sports.

"If I can step into something like this, there's no reason they can't too."

This report by The Canadian Press was first published Sept. 16, 2020.

— By Kelly Geraldine Malone in Winnipeg