Brady Tkachuk is hunkered down with family in St. Louis trying to wait out the COVID-19 pandemic. The Ottawa Senators winger has also been keeping close tabs on a pair of teammates who tested positive for the disease.
0
Mar 30, 2020 4:27 PM By: Canadian Press 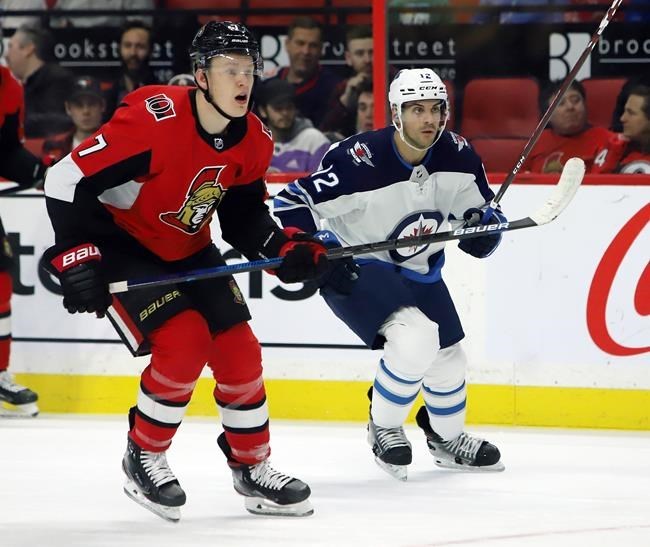 Brady Tkachuk is hunkered down with family in St. Louis trying to wait out the COVID-19 pandemic.

The Ottawa Senators winger has also been keeping close tabs on a pair of teammates who tested positive for the disease.

"Those guys, they're doing well," Tkachuk said on one of the NHL's video conference calls Monday. "We're a tight group, so we're always in contact with one another."

Two of the league's four players to test positive since the season was suspended March 12 amid the novel coronavirus outbreak are unnamed members of the Senators.

The team played in San Jose, Calif., against the Sharks on March 7 despite a warning from officials in Santa Clara County against holding large public gatherings. The Colorado Avalanche played at SAP Center the following night, and two members of that team have also since tested positive for COVID-19.

"All of us are concerned about (the Ottawa players) and everybody impacted by it," Tkachuk added.

Reporters have been asked by the league to submit questions ahead of time for the video conferences calls.

Despite being on one of two teams to have players test positive, Tkachuk was only asked one question on the subject by a member of the NHL's public relations staff during a 35-minute session that also included a trio of Atlantic Division rivals — Toronto Maple Leafs captain John Tavares, Boston Bruins captain Zdeno Chara and Detroit Red Wings centre Dylan Larkin.

The Senators had two days off in California following their game in San Jose before meeting the Anaheim Ducks and Los Angeles Kings on consecutive nights. Ottawa's contest at the Staples Center on March 11 came 24 hours after the NBA's Brooklyn Nets — who had four players test positive — played at the same arena against the Los Angeles Lakers.

The Avalanche faced off against the Kings at Staples Center on March 9.

COVID-19 pandemic has killed thousands of people across the globe, devastated economies and brought about an era of social distancing and self-isolation.

As for the pause to the NHL season, Tkachuk said he and older brother Matthew, who plays for the Calgary Flames, have been doing their best to stay active.

"Been keeping busy with him and my younger sister," Tkachuk said. "We've got the Peloton (bike) downstairs that we've been going on. We've been just keeping active with basketball and stuff like that. It gets fired up.

"It's not stuff we're not used to, but I'm trying to make the most of it."

Tavares, who's at home in Toronto with his wife and young son, said it took some time to process this new reality.

"First couple days just try to get an understanding of kind of where things are at and what's hit us," Tavares said. "Since then just try to develop some type of routine, some type of structure."

Chara provided the funniest moment of his session when he was asked — every player has been lobbed the same question — which teammate he'd least like to spend time with in quarantine?

"The way he farts ... the smell is awful," said Chara, who had the other players cracking up. "He likes his chicken wings."

Turning serious, Chara, whose Bruins sat first in the overall standings when the league paused after falling in Game 7 of last spring's Stanley Cup final, said it's important to put everything in perspective.

"It's one of those situations that you can't really control," said the 43-year-old defenceman. "Right now we all have to look after each other and look after our families. Hockey's secondary.

"Hopefully we will play again and we'll see when that's gonna be."

On a separate call with a representative from the remaining Atlantic Division teams later Monday, Montreal Canadiens captain Shea Weber touched on the public service announcement he did on the importance of listening to public health and government officials during the crisis.

"We're in this together," Weber said. "As soon as someone's messing around or not taking it seriously, that's when things can turn bad for everyone.

"It's tough times, but we've just got to stick together and come through this together."

Players were also asked their preference for how the league should proceed if it's allowed to resume this spring or summer.

"It would be tough to jump straight into playoffs, there's no question about it," Tampa Bay Lightning defenceman Victor Hedman said. "But this is uncharted waters for everyone.

"It's tough to see where this is going to end."

This report by The Canadian Press was first published March 30, 2020.