TORONTO — While unable to perform on the field, Toronto FC midfielder Jonathan Osorio is still managing to leave his mark during the COVID-19 outbreak.
0
Mar 30, 2020 12:20 PM By: Canadian Press 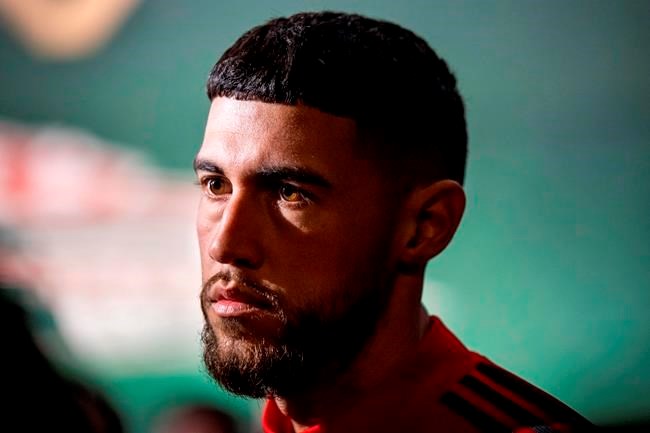 TORONTO — While unable to perform on the field, Toronto FC midfielder Jonathan Osorio is still managing to leave his mark during the COVID-19 outbreak.

The 27-year-old from nearby Brampton did a recent virtual visit with Toronto's Hospital for Sick Children, better known as SickKids. And he showcased a friend — a pint-sized half Shih Tzu, half Yorkie named Osito (little Oso) — in an appearance beamed into patients' rooms.

"It was nice ... I just tried to make their day, put a little bit of positivity into their day," Osorio said Monday. "I even showed them my dog. And I know that they thought that was cool."

"Anything that I can do like that to help people get through this," he added. "It actually helps me as well. It brightens up my day as well."

Osorio has moved back to Brampton to stay with his family during the pandemic. He counts himself fortunate that he is able to ride out the storm with loved ones in his home town.

Another brother is also able to stay at the family home while a third has to go to work as does their mother.

The pandemic has hit Toronto FC close to home. French defender Chris Mavinga revealed his uncle had died in France as a result of the virus.

"Thank you for your prayers and support. I feel so powerless about this situation," Mavinga tweeted. "My uncle was a person very important for me. I will miss him a lot."

"It's horrible. It's a really sad thing for someone to lose a relative or a family member to anything, not only this virus but to anything ... It's sad. There are many people round the world going though this."

Osorio tries to stay in touch with his teammates, keeping each other company and making sure everyone is OK.

"Especially mentally because I think these times could be really hard mentally," he said.

He made a point of contacting 20-year-old midfielder Jacob Shaffelburg, a native of Port Williams, N.S., who just moved into his own place here.

"He's by himself so I reached out to him. He seems like he's in good spirits," Osorio said. "Everybody seems like they're doing OK, staying in there, staying strong. We're all in this together."

Osorio knows what it's like to be away from home, having left Canada for Uruguay as a teenager to further his soccer career. Upon his return, he joined the Toronto FC academy in September 2012, graduating to the first team in 2013.

Today he is TFC's leader with 246 games played in all competitions, including 197 MLS regular-season contests. Fullback Justin Morrow (216 games) and captain Michael Bradley (200) are the only others to reach the 200-game milestone in all competitions.

Osorio says he watches daily COVID-19 briefings on both sides of the border, given Major League Soccer encompasses both countries.

But as for a return to training, "nobody really knows ... From what I've seen this is not going to be over any time soon."

"At the same time you work and you stay positive, knowing that this will end some day. You don't know when."

Osorio says he runs in the morning on a nearby track before doing his group video workout with TFC teammates.

"I'm keeping as fit as possible. And staying ready for whenever this passes us by," he said.

Osorio said the club has been "amazing" in recent weeks, providing the players with everything from training equipment and fitness programs to meals.

The team has not practised since March 11. They were sent home the next day as MLS suspended its season.

"I miss the game every day," said Osorio.

But he also says he has learned from the current circumstances.

"I think these times have made us very grateful, made us realize how good we have it — to be able to play football as our occupation ... (and) the lifestyle we live."

TFC players, like those on other teams owned by Maple Leaf Sports & Entertainment, are donating part of their salary to the Team Toronto Fund to help arena/stadium and support staff affected by the sports shutdown due to the pandemic.

This report by The Canadian Press was first published March 30, 2020.