VANCOUVER — With the Vancouver Canucks on a three-game losing skid head coach Travis Green expects some frustration in the dressing room. “Frustration is going to happen and rightfully so,” said Green. “I don’t mind frustration. Our team should be.
Dec 17, 2019 11:37 PM By: Canadian Press 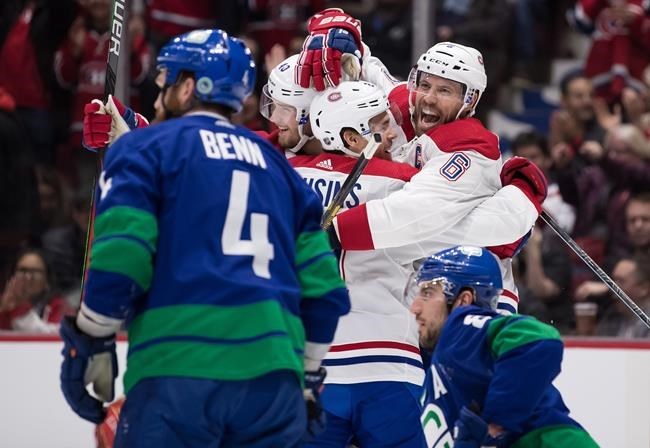 VANCOUVER — With the Vancouver Canucks on a three-game losing skid head coach Travis Green expects some frustration in the dressing room.

“Frustration is going to happen and rightfully so,” said Green. “I don’t mind frustration. Our team should be.

It was the fourth loss in five games for Vancouver. After beginning December in a playoff spot, the Canucks have sunk to 11th in the Western Conference. They are four points back of Calgary for the wild card spot in the West.

“Lately I think we are having more good periods than not.”

Miller was particularly upset he failed to score on a breakaway in the second period with the Canucks leading 1-0. Montreal took the puck down the ice and Nick Cousins scored the tying goal.

“It could have changed the whole complexation of the game,” he said.

“The last three or four games I’ve had lots of looks. It’s good you are getting the looks, it means you’re doing good things. But at the same time, I feel like I need to take responsibility.”

Adam Gaudette, on a first-period power play, scored for the Canucks (16-15-4). Vancouver ended the night 1 for 4 on the power play. They are two-for-16 with the man-advantage over the last five games.

“That’s a gutsy, character win for sure on the road,” said Domi. “They had some opportunities on the power play and our PK was great. We capitalized on our power plays. We grinded it out.”

The Canadiens went ahead 2-1 just 1:51 into the third period after Jake Virtanen was sent off for slashing. With Montreal buzzing in the Vancouver zone, Phillip Danault was hauled down. As he lay on the ice, he managed to slide the puck to Tatar, who scored his fourth goal in as many games.

Vancouver’s Tanner Pearson was called for tripping on the play. That led to Weber finding a loose puck and scoring his 11th of the season at 3:25 of the third period.

Montreal was two-for-two on the power play after going 0 for 1 in a 2-1 loss to Detroit on Saturday night.

“We needed one,” said Tatar. “Last game we didn’t get one.

“It gave us a spark for sure.”

The Canucks pressed as the third period wound down. They came close to scoring with under five minutes remaining when an Elias Pettersson shot hit the cross bar, then fell behind goaltender Carey Price.

“It was just hard work,” said Price, who finished the night with 38 saves. “I thought we did a good job of protecting our house and making it difficult.”

Montreal coach Claude Julien said his team got better as the game progressed.

The game opened a western Canadian road swing which sees the Canadiens playing in Calgary, Edmonton, Winnipeg before Christmas.

The Canucks will try to break out of their slump when they host the Vegas Golden Knights on Thursday. Vancouver lost 6-3 to the Knights last Sunday in Vegas.

“Everyone wants to win,” said Green. “It’s not very often you don’t have a tough stretch during the season. A lot of times you are going to have a couple of them.”

“It’s when you are struggling and going through a tough time, that’s when you need to communicate even more,” said Markstrom, who stopped 27 shots.

“You can’t go inverted and be quiet, sit and be mad. You need to talk to each other. We can’t do it as one person. We need everybody.”

Both teams had goals disallowed during the second period.

Gaudette looked to have scored his second of the night off the rebound of a Josh Leivo breakaway. The goal was waved off after a video review showed Leivo was offside.

Armia thought he had put the Canadiens ahead a few minutes later but a review showed Lehkonen interfering with Markstrom.

NOTES: The Canucks’ Tim Schaller was a healthy scratch for a second straight game after going 22 matches without a point. … Vancouver has placed forward Sven Baertschi on waivers. Baertschi, who is earning US$3.36 million, continues to play with the AHL Utica Comets. … Montreal’s Victor Mete (ankle) and Jesperi Kotkaniemi (concussion) practiced in non-contact jerseys Monday and Tuesday and remain day to day.

This report by The Canadian Press was first published Dec. 17, 2019.