'Try to set goals every day': Finding moments of positivity during the pandemic

Just over a year after picking up the guitar for the first time, Blue Jays general manager Ross Atkins brought his instrument to spring training in Florida but didn't get a chance to play it.
May 29, 2020 1:00 AM By: Canadian Press 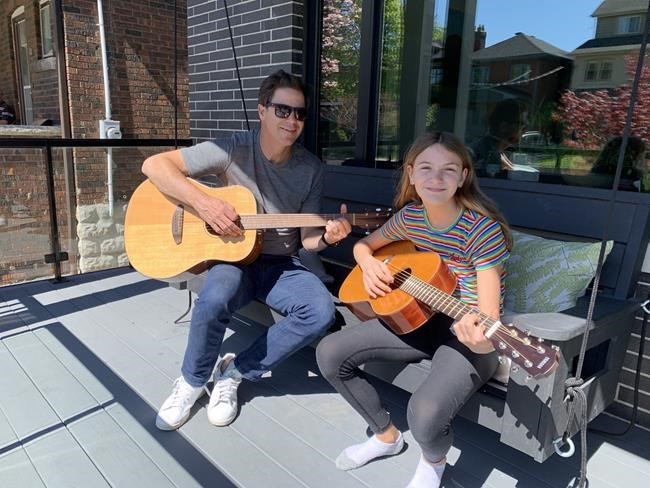 Just over a year after picking up the guitar for the first time, Blue Jays general manager Ross Atkins brought his instrument to spring training in Florida but didn't get a chance to play it.

At the time, he knew a few chords but wasn't ready to play a song in its entirety. When the pandemic hit, Atkins — who had to isolate at home for 14 days after returning to Canada — decided to "double-down" on his guitar efforts and booked weekly virtual lessons for himself and 12-year-old daughter, Rita.

"That was one of the first things I thought is, 'I need to pick up the guitar,'" Atkins said. "I think we knocked out a few puzzles too. But that really pushed me to do something I enjoy and challenge myself a little bit."

With the COVID-19 pandemic now in its third month, many individuals and families are continuing to try to glean positives where they can from a negative situation.

Natalie Durand-Bush, a mental performance consultant and professor at the University of Ottawa's School of Human Kinetics, said it's important to see things as an opportunity whenever possible.

"Try to set goals every day to do something good," she said from Ottawa. "That could be for yourself or that could be for others. If you want to maintain your mental health, your level of wellbeing, you have to seek these opportunities to experience something positive in your life.

"It doesn't have to be big. It can be small gestures."

In Newmarket, Ont., about a 30-minute drive north of Toronto, the town went so far as to create a positivity campaign last March to raise spirits.

A group of ambassadors used social media to spread "positivity, happiness and humour" by sharing stories of the community's bright side and perseverance. The town even appointed customer service centre supervisor Jamie Boyle to a new role of "chief positivity officer."

Boyle said the overall positivity effort has made progress in recent weeks. The original list of 10 community ambassadors has tripled in size and various local online groups are gaining in popularity.

"People are sharing things like mental health awareness workshops and we're having people that are starting new hobbies that they may have never done before," he said. "I was talking with a gentleman who had always wanted to take up the bass guitar and this has given him the perfect opportunity to do that.

"He's really liking the idea that this is giving him a chance to look at something aside from the news that's on out there. I think that's what the community is starting to recognize."

Durand-Bush said that while people may strive to find positivity, it can be quite difficult when fear and anxiety are overwhelming.

"It's normal to have those negative emotions, but you want to make sure that you're balancing these with positive ones," she said. "Focus on those little things that you can control ... break it down into these little manageable pieces."

She added that taking up a hobby or trying an activity like gardening, cooking or a new outdoor exercise can come with many benefits.

"In our fast-paced society it's always been go, go, go," she said. "Now that we have this time to just be present, be there, play games, just have all those conversations that we've been meaning to have that we've put on the back burner because we don't have time."

With no firm date for the start of the Major League Baseball season, Atkins has been able to spend more time at home on evenings and weekends than he would in a normal spring.

He has tried to set aside at least 15 minutes every day to play his six-string acoustic guitar.

"I have always been interested and just never fully committed until now," Atkins said from Toronto. "So I think it has definitely helped me think about just how busy I was and how programmed I was that I did allow myself (to) find that time to enjoy something like that.

"I can not only just enjoy the process, but also enjoy it with my daughter."