VANCOUVER — The Vancouver Whitecaps have paid a big price to try and fill a large hole in their offence. The Whitecaps have signed Canadian striker Lucas Cavallini in hopes of bringing some scoring punch to the Major League Soccer squad.
Dec 16, 2019 2:15 PM By: Canadian Press 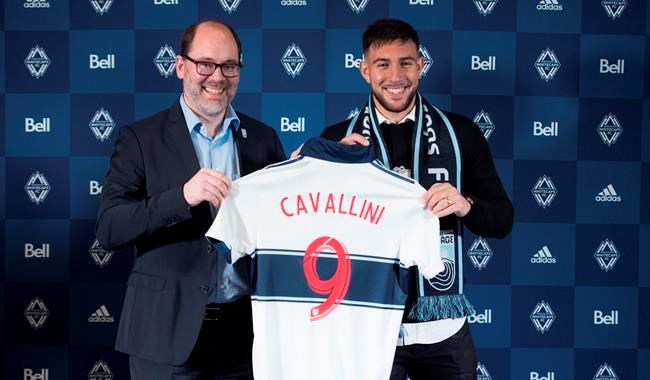 VANCOUVER — The Vancouver Whitecaps have paid a big price to try and fill a large hole in their offence.

The Whitecaps have signed Canadian striker Lucas Cavallini in hopes of bringing some scoring punch to the Major League Soccer squad.

"I was impressed with what Vancouver had to offer me as a footballer," Cavallini, a Toronto native who had been playing for Club Puebla in the top Mexican league, told a news conference Monday. "Obviously they brought me here for a reason. What I would like to do is score goals and help this team as much as possible."

The Whitecaps managed just 31 goals last season, the second least in the league, while struggling to an 8-16-10 record. They finished last in the Western Conference and missed the playoffs for the third time in four years.

Cavallini scored 29 goals and added eight assists in 81 appearances across all competitions over 2 1/2 seasons with Puebla. He also scored 11 times in 17 senior national team appearances with Canada, including goals against Mexico and the United States.

Nicknamed El Tangue or The Tank, the 26-year-old brings size and speed.

Cavallini came at a cost.

Axel Schuster, Vancouver's sporting director, said the entire transfer "is a package of more then eight digits" but would not give specific numbers.

"Never ever in history has the club spent so much money," said Schuster. "But he's worth it."

ESPN has reported the fee at around US$6 million.

Cavallini will take up a designated player spot on Vancouver's roster.

Schuster said Cavallini brings the mentality, work ethic, discipline and team spirit the Whitecaps look for in a player.

"We are really clear with our philosophy," he said. "Really clear what we want to be next season."

To make his point, Schuster showed a video from Cavallini's final game with Puebla. In the clip, an opponent takes the ball from a Puebla player and goes on the attack. Cavallini runs the player down, forces him off the ball, then passes the ball safely to a teammate.

Cavallini admitted he was surprised Schuster selected that video but understands the message being sent.

"It's not only about scoring goals," he said. "I like to do things extra.

"I like to work off their defenders and try to tire them out the whole game. I can do whatever they want me to do."

Schuster said the Whitecaps are looking to add players to support Cavallini.

"We try to put the puzzle pieces together and we are competing for the best profiles at every position," he said. "We are still working on everything."

Besides playing in Mexico, Cavallini had 44 goals in 125 appearances in the Uruguayan Primera Division. Signing with the Whitecaps gives him a chance to return to Canada.

"It's been 10 years since I have been back in Canada and I want to bring what I've learned from outside to a club like this, a club with a long history," he said. "I'm willing to do what it takes."

Cavallini is also excited about playing in MLS.

"It's a league that is growing," he said. "It's a product in the making. MLS in the future will be really, really big.

"It's a league that is competitive. You can see there is a lot of potential to be a better league. It's a process that is going to take time. But with the right players, right mentality, it's going to be a really important league."

The Whitecaps are hoping to restore some shine to a brand that has been tarnished. The team's struggles on the field has resulted in empty seats at BC Place.

Cavallini understands the expectations being placed on him.

"I come from leagues where the fans pressure the players way more than here," he said. "Pressure is not going to be a question.

This report by The Canadian Press was first published Dec. 16, 2019