WINNIPEG — The Winnipeg Jets were angry coming into Tuesday's game against the Vancouver Canucks, said winger Mathieu Perreault. The Canucks had blanked the Jets 4-0 the night before and Winnipeg was not about to repeat the result.
Mar 2, 2021 8:46 PM By: Canadian Press 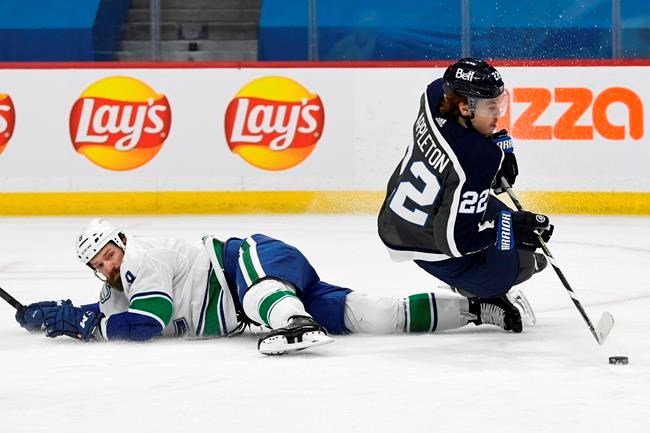 The Canucks had blanked the Jets 4-0 the night before and Winnipeg was not about to repeat the result.

Nearly halfway through the season, the Jets have yet to lose two games in a row in regulation — and that's deliberate, Perreault said.

"This is the mindset, this is something we talked about before (Tuesday's) game," he said. "We want to be that team that never loses two in a row. You’ve got to get pissed off every time you lose a game."

The snarly attitude worked as the Jets (14-7-1) bounced back and topped the Canucks 5-2 on Tuesday.

"We’ve got men that understand that four (games) in six (days), we’re going to be behind it a little bit so it might look a little gritty and it might not be smooth, but you can win a hockey game like that," he said.

Kyle Connor and Blake Wheeler each had a goal and two assists on Tuesday. Perreault, Mason Appleton and Paul Stastny all found the back of the net and Mark Scheifele tacked on three helpers.

Some sloppy defensive play by Vancouver helped Winnipeg take a 2-1 lead into the first intermission.

Brandon Sutter dove, trying to sweep the puck from the Canucks zone. Instead, it was picked up by Perreault, who waltzed in and fired a shot past Vancouver goaltender Braden Holtby with 2.6 seconds left in the period.

Perreault said he was just trying to make a play when his line was put on late in the frame.

“I saw there was 10 seconds so I just sprinted to the middle of the ice. And somehow that puck got loose in their end and I was able to jump on it and just fire it on net as quick as it can," he said. "I knew there wasn’t much time left. And I’m just lucky it went in.”

The fast, gritty play was the kind of offensive effort Maurice likes to see from his group.

“There was a lot more chaos around their net that we haven’t seen from our team," he said.

It was a busy night for Holtby, who stopped 34-of-38 shots. Winnipeg’s Laurent Brossoit had 30 saves.

"I thought we lost way too many puck battles tonight, I thought we were a little soft when we had the puck at times," he said. "And that was the difference in the game. It was a big difference.”

It's been a frustrating stretch for the Canucks. The team won just two games in February and had hoped Monday's win would be the beginning of a run.

The group has been playing "pretty darn well" for the last few weeks, but needs to string together some victories, Miller said.

"We needed to come out with at least a point today, at least just put a better effort on the ice," he said.

"We’re not in a position to not bring our best. We need to bring our best nine times out of ten and we’ve shown that even when we do play our best, it’s hard to win. So there’s no excuses. We need to be better and push ourselves.”

Both teams will be back in action Thursday, with the Canucks hosting the Toronto Maple Leafs in Vancouver and the Jets visiting the Canadiens in Montreal.

NOTES: The Canucks were 1 for 2 on the power play. Winnipeg was 1 for 3 with the man advantage. … Tucker Poolman returned to the Jets lineup after missing three games with an undisclosed injury. … Canucks winger Jake Virtanen played his 300th NHL game.

This report by The Canadian Press was first published March 2, 2021.