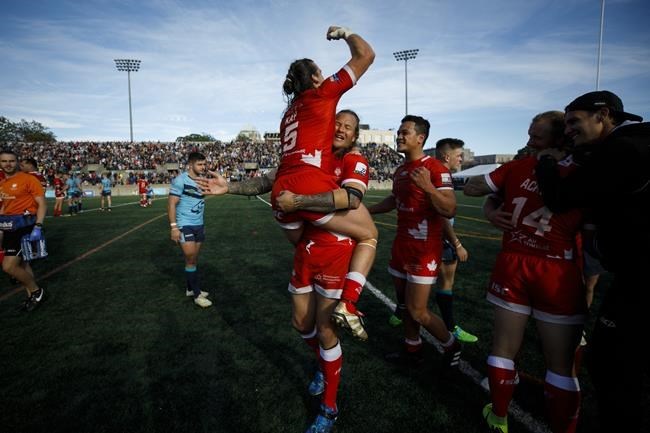 The Irish international is also one of only five players left from Toronto's inaugural 2017 squad to have taken part in the Wolfpack's rise from the third-tier League 1 to the elite Super League.

With the Super League season set to resume Aug. 2 after a pandemic hiatus, Kay joins Wakefield initially on a loan agreement through the end of the season. He has signed a two-year deal covering the 2021 and 2022 campaigns.

Toronto has faced a salary cap crunch in recent times and is currently dealing with a visa issue that could leave New Zealand star Sonny Bill Williams and six other imports on the sidelines when the team resumes play next month in England.

Assigned the Wolfpack's heritage jersey No. 1 with the club, Kay is a pacey winger with a nose for the try-line. He scored 65 tries for Toronto, upping his career total to 159.

"While the fans will remember Liam for his incredible strike rate for games played and tries scored, everyone inside the Wolfpack bubble will also remember his commitment to the cause for the first-ever transatlantic professional sports team," Toronto coach Brian McDermott said in a statement.

"We all wish Liam well, and I'm sure I speak for everyone in expressing our gratitude to his efforts over the last four years."

The move to Wakefield takes the 28-year-old Kay back to where he began his career in 2012. Kay has made more than 150 career appearances for Wakefield, Doncaster (on loan), Leigh Centurions and Toronto.

He was signed by Paul Rowley, Toronto's first coach, who had worked with him at Leigh.

Speaking in 2017, Kay said he committed to Toronto because Rowley "sold this dream to me." Several other former Leigh teammates also signed on.

"We kind of jumped into the unknown, when I didn't know what it was,” said Kay, a native of Leeds. "I have no regrets. I'm glad I did it."

Kay made his mark in plenty of games.

He scored in the club's first-ever fixture, a 2017 pre-season friendly against Hull FC. He added two more tries in the Wolfpack's opening 2017 League 1 match against the London Skolars.

And he helped the Wolfpack earn promotion to the second-tier Championship by scoring in five of seven post-season fixtures in 2017.

Kay opened the 2018 season with a three-try performance against Leigh before a left ankle injury ended his season prematurely. He was involved in a tackle in a game against Halifax when his studs caught in the mud and his ankle rolled the wrong way.

After the ankle did not respond to rehab, he had to undergo surgery that delayed his start to the 2019 campaign. He still finished with 12 tries, helping the team win promotion to the Super League.

This season, he wasted little time scoring Toronto's first-ever try in the top tier — chasing down a Hakim Miloudi kick to touch down in the corner three minutes into Toronto's opening game against Castleford.

Easy to spot with long locks that often did not stay totally in place during games, Kay was a fan favourite.

"I would just like to thank all the fans for your loyal commitment over the last four years, that's including Wolfpack fans in the U.K. and of course the ones in Canada," Kay said in a statement. "It has been a privilege to represent you and I have cherished every moment of it."