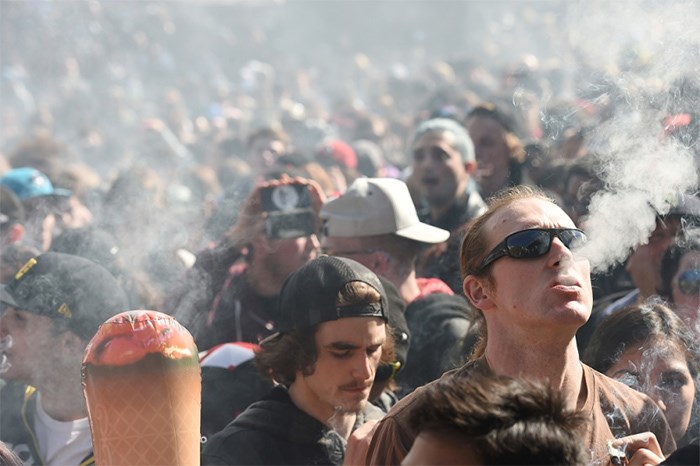 The black market remains, very conservatively, three-quarters of the market. Illegal dispensaries outnumber legal ones by what seems to be 50 to one in the province. We lingered like sloths longer than what was wise to legalize, then stirred like itchy cheetahs to bring the product to market. Even though state-sanctioned pot is more than half more expensive, governments seem to be the first drug dealers in history to be losing money.

Smokers swagger about the city, casually puffing affordable weed, the way an earlier generation took public swigs from brown-bagged affordable red. Please, make this a transition we surpass – for legal dispensaries to surface more speedily than a handful every hockey season, for bad players to retreat into other fraudulent forms and for cannabis to be used privately as something closer to alcohol than to cigarettes.

To do so, though, in part we need the chronically annoying activism in the city to cease with this patent nonsense about its purported struggle. Theirs is a fourth-rate, First World problem.

Troubling, too, is the mayor’s tepidness to assert his officialdom over the officiousness of the mob that would wish to trample Sunset Beach each April 20 under the pretense of pseudo-protest.

Let’s be clear, protests belong to legitimate grievances about discrimination, inequality, unjust policies or troubling situations. What takes place on 4-20 at the public park devalues the concept and is a weedy (pun intentional) euphemism for a retro festival featuring a retro band. Didn’t know Cypress Hill were still together? They are. Didn’t also know there was still anything to protest? There isn’t.

In case you were in a haze, the law’s first version is here, cannabis 2.0 legislation for edibles and beverages is coming, and possession pardons are heading our way. In other words, the rules have been changed to suit users past, present and future. You’d think it would be over to you now to abide the balance of the rules we all live by.

But no, we will get a long-weekend middle finger. No permit. No authority. No consideration.

While weed’s whiff doesn’t bother me as does the noxious tobacco sidestream, for the thousands of families in the park’s vicinity the flouting of an anti-smoking bylaw is not inconsequential. Why do their concerns not matter?

Let’s call it what it is: an open-air trade fair, kiosks and vendors and profiteers galore, a celebratory smoke-in. There are no marches across the bridge for rights, no plaintive pledge that we shall overcome, and nothing left to oppose.

Let’s then expect of it an adult leadership and treat it as the self-soothing big business festival that it is, meaning a mature environment that fits within the parameters of a permit – and where it belongs geographically out of harm’s way, not where it wishes ideologically. If the park board is powerless to prevent it, let’s work out a locale.

The 4-20 fiasco deserves the new mayor’s attention, but he has chosen not to exercise authority as the city’s leader and the police board chair. He has been collecting friends the way obsessive children used to collect hockey cards. But even at this early stage, he owes us an understanding of his boundaries. Being a self-described mayor for everyone doesn’t mean disappointing no one.

In the few days before the date, the skirmish between organizers and the city will focus not on where or whether to stage the Celebration of Blunts but on who will pay what for an unsanctioned event. Yes, those of the grow-ops need to grow up, but this is a dual responsibility and neither side wins any token (bad pun intended) of appreciation.Set featured image

Meantime, we taxpayers will be paying to reclaim the site in the months to come, as we largely did last year and the year before to the tune of nearly $600,000. Organizers dispute that total, of course. To them I think we can all agree: if your protest is about what it costs the city government to do anything, we’ll join you, but get in line.