A pile of garbage waited to be picked up near the entrance to Sunset Beach Park parking lot on April 22. Photo Dan Toulgoet Vancouver City Council voted on a motion today to look at suing the organizers of the 4/20 cannabis festival.
0
May 15, 2019 3:40 PM By: Bob Kronbauer 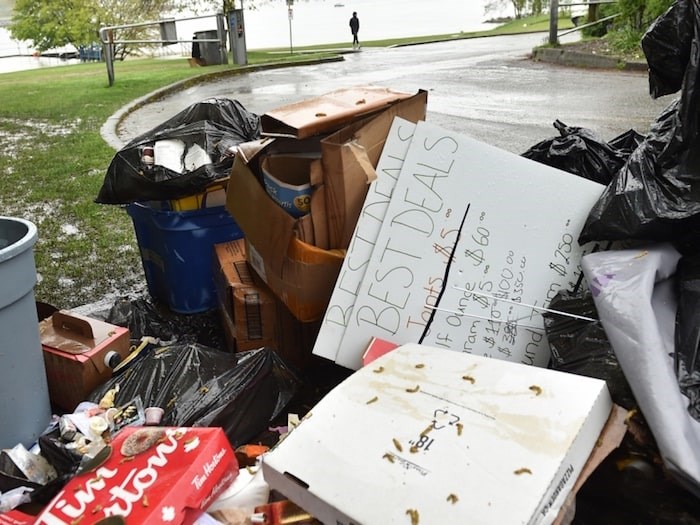 A pile of garbage waited to be picked up near the entrance to Sunset Beach Park parking lot on April 22. Photo Dan Toulgoet

Vancouver City Council voted on a motion today to look at suing the organizers of the 4/20 cannabis festival.

Councillor Melissa DeGenova has been sparring with organizer Jodie Emery for weeks now over Twitter, and this was her motion she introduced.

Are u suggesting I shouldnt respond @JodieEmery ? U still haven’t answered my Qs! In fact, other taxpayers (who also pay my salary) asked me to hold you accountable. On topic of payment & taxpayers $, they’d like u to pay ENTIRE BILL for your party #vanpoli

The main thrust of the motion is to assign City staff to "review options for legal action against “420 Vancouver Protest Festival & Farmer’s Market” and/or the organizers, to recover costs for resources allocated by the City of Vancouver, the Park Board or any other civic agency and/or organization that receives funding from the City of Vancouver Operating Budget."

While speaking to it in council today, DeGenova raised her voice and spoke emotionally about how the organizers paid the hip-hop group Cypress Hill $80,000 to perform, then refused to pay the City's costs for the un-permitted event.

She also noted that she's worried about safety, kids, and a "different crowd", which she did not expand on. She fears something bad will happen next year, as in someone getting hurt.

Green Councillor Michael Wiebe noted that he would not be voting in favour of the motion to explore legal action, and that 60,000 young people showed up in the park for a reason. He insinuated that it's because the City's not doing enough to provide these types of opportunities to attend free events elsewhere, and that more could be done in the future.

DeGenova ended her plea by literally begging council to vote in favour of her motion, which says city staffers will explore legal action. Whether or not Council decides to act on it will be debated in the future.

Council voted in favour of review options for legal action.

However one part of the motion did not pass, and that was the one where DeGenova hoped to have city staff consider taking legal action against businesses that provided any equipment or services to the event, vendors who purchase booths and entertainers who performed. As in, suing everybody who participated as a vendor or a contractor. That's not gonna happen.