There are many ways you can get an impaired driving charge despite having consumed no alcohol at all.
Jan 8, 2021 2:02 PM By: Kyla Lee 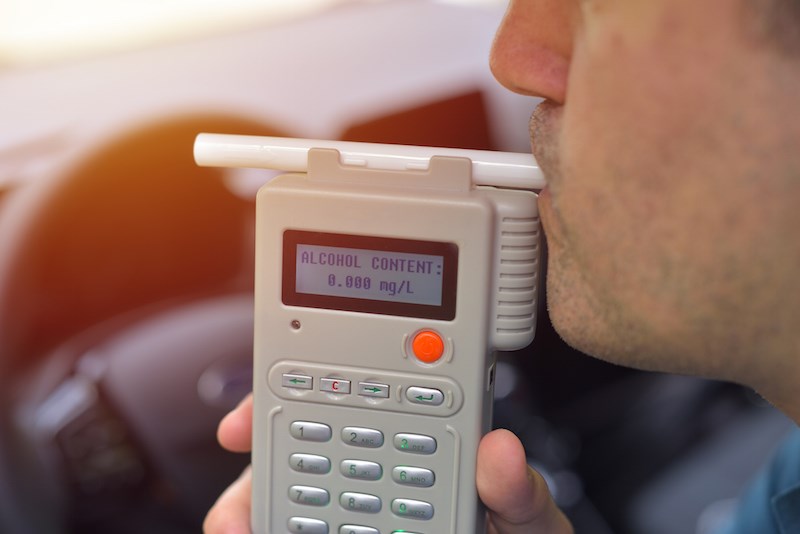 Driver due to being subject to test for alcohol content with use of breathalyzer. Daniel Chetroni via iStock/Getty Images

A lot of people think that those who are charged with DUI offences or receive driving prohibitions from drinking and driving are facing those consequences because of their own decisions. But there are many ways you can get an impaired driving charge despite having consumed no alcohol at all.

1. False readings come from common substances you eat and drink

Many products that you would keep in your vehicle or eat or drink shortly before driving can cause false readings on breathalyzers. For example, mouthwash, kombucha, certain energy drinks, breath spray, cough syrup, and soya sauce can all cause elevated breath alcohol readings.

Typically, these substances only cause false readings if they are taken within fifteen minutes of the test. However, that is only in ideal breath testing conditions. If someone has dental appliances, like braces, Invisalign, or dentures, or cavities, loose fillings, or recent tooth extraction the alcohol can last in the mouth longer.  Moreover, because the test is required to be taken immediately under the Criminal Code, chances are that if you’re stopped and tested you would still have residue from these products in your mouth.

This means that healthcare workers are at a major risk fo getting failed breath test results, as is anyone who sanitizes their hands after being pulled over, or shortly before driving.

3. A fever can cause a failed breathalyzer result

Breathalyzers work on a principle known as Henry’s Law. This is a scientific rule that states that “at a given temperature, the saturated vapour above a solution contains a concentration of solute proportional to the concentration of solute in the solution.” In layman’s terms, this means that evaporated vapours above a mixture have a proportional amount of the substance in the mixture.

4. Your diet can cause false readings on breathalyzers

Certain diets can cause the body to enter a state of ketosis. Ketosis is the body’s biological process of breaking down stored fats. This can be triggered by following the keto diet, practicing intermittent fasting, or in people who are suffering from eating disorders like anorexia and bulimia. This causes acetone production in the body. Roadside breathalyzers cannot distinguish between drinking alcohol (ethanol) and alcohols naturally produced by the body, like acetone and isopropanol.

Remember that 2100:1 ratio that is applied in Henry’s Law and breath alcohol testing? Well, the chemical byproducts of the body’s ketogenic state produce positive results at a much lower proportion. This means that even a minute amount of acetone can trigger a very high breathalyzer reading, without any impairing effects whatsoever.

5. Diabetic people should not be tested on breathalyzers

While this is not true for every person with diabetes, those with early-stage diabetic ketoacidosis or those who are not yet diagnosed with diabetes can receive false results on the breathalyzer. This effect is emphasized in people who have diabetes but are having trouble controlling their blood sugar levels. Some studies have shown that there are high rates of false conviction for DUI for people with diabetes.

Each of these conditions have one thing in common: they are all forms of regurgitation that have no outward indicators. While burping, belching, vomiting, and regurgitation can cause false results on breathalyzers, police are trained to try to observe these occurrences and wait fifteen minutes to rule out the impact. But police are not able to observe what they cannot see. The effect of these types of conditions means that undigested alcohol vapours can be brought up from the stomach and into the mouth, interfering with the test result. Particularly in cases where people are still absorbing their alcohol, leakage of alcohol vapour through a loose sphincter valve or the regurgitation of undigested stomach contents into the esophagus without even having anything enter the mouth can elevate the results on a breathalyzer. Of course, if the police fail to notice a single burp, this too can cause false readings on breathalyzers.

While it is extremely rare, there are certain medical conditions that can cause an unusual buildup of yeast in the stomach. This yeast then ferments inside the stomach, causing the stomach to effectively fill with alcohol. That alcohol gets absorbed into the body and leads to false readings on breathalyzers, even where the person has not consumed a single drop of alcohol. This is known as autobrewery syndrome.

Many people who suffer from this condition have been mistakenly labelled as secret drinkers, or charged with DUIs despite their innocence. They only discover as a result of these allegations that they have a medical condition.

8. Your job can cause a DUI

Many jobs involve frequent exposure to chemicals. People who work as hairdressers, who are professional painters, artists, who work in automotive painting, or who build roads are frequently breathing in strong chemicals throughout their workday. Over time, these chemicals can build up inside the body, creating small but permanent concentrations of these chemicals in a person’s bloodstream.

Those chemical concentrations in the body are known as “occupational exposure.” The occupational exposure to those chemicals can interfere with the breath test analysis, even on the most sophisticated breath test instruments. This is because many of the substances that are absorbed into the body contain forms of alcohol or byproducts that react with the sensors in breathalyzers that measure breath alcohol level.

9. You can get a DUI for refusing to blow into a breathalyzer

Canada’s impaired driving law allows police officers to ask you to blow into a breathalyzer without any grounds whatsoever. Many people believe that this is wrong, and protest by stating that they will not provide a breath sample.

The problem with this approach is that the consequences for refusing to provide a sample into a breathalyzer are the same or worse as blowing over the legal limit.

In British Columbia, it can result in a roadside prohibition for 90 days and a vehicle impoundment for 30 days. Or, you can face criminal charges with the consequences being a mandatory criminal record, one-year driving prohibition, and $2000 minimum fine.

OPINION: Unlearning racism starts with learning more about those different from you
Jan 24, 2021 1:25 PM