We’ve been asking for more active transportation for years. Can the pandemic get us rolling?

Let’s think now about how walking and cycling can at the very least help eliminate congestion when we return to “normal.”
Apr 25, 2020 5:21 PM By: North Shore News 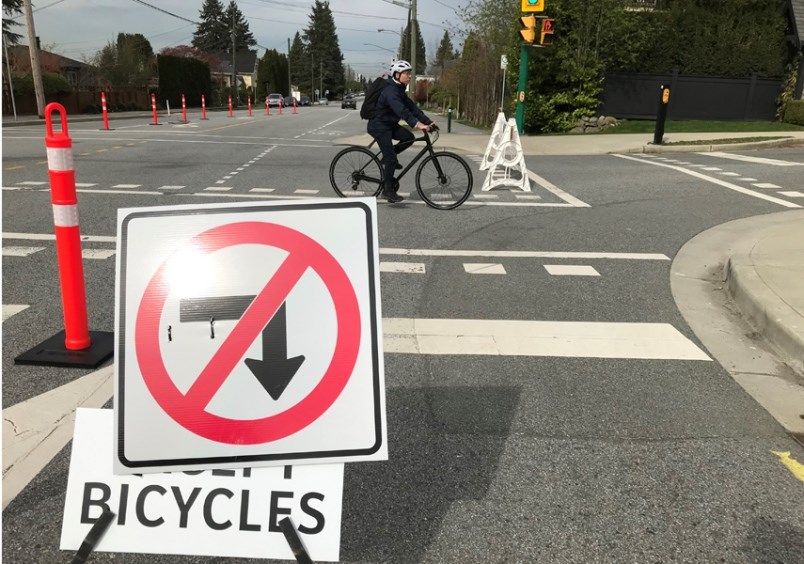 A cyclist heads onto a section of Grand Boulevard West in the City of North Vancouver that has been reserved for cycling during the COVID-19 era. Photo by Andy Prest, North Shore News

My partner reads science fiction novels from the 1960s and ’70s.

Their arty covers sport extreme titles: A World Without Women;Mutiny in Space;Defy the Stars. You get the picture. Is it any wonder I’ve been thinking about branching into sci-fi? I have this book idea. An oil-based contagion on planet E has made people think it is reasonable to enter metal carapaces with explosion-driven wheels then zoom around, making a wicked racket and stink so bad it causes cancer. The people on planet E have no self-insight until a global pandemic stops traffic dead.

I know. Nothing like that could ever really transpire. But say in our wildest dreams it did. What would happen to transportation? Today, car sales are plummeting. Oil producers can’t give the stuff away. Our public transit system in B.C. is losing $75 million a month. Even ICBC is helpful (a clear sign the world is ending), deferring payments with no penalty. Reality is that people are walking and cycling more, for exercise around the neighbourhood, but also to get to where they need to go. This is the biggest increase in walking and cycling for transportation we have seen on the North Shore, probably ever.

Back when things were normal, and everyone was using their metal carapaces with explosion-driven wheels, congestion was epic. After 2:30 p.m., no one tried to drive east because Ironworkers bridge traffic was so bad. The Integrated North Shore Transportation Planning Project found that if we eliminated just seven percent of vehicles, we could end that gridlock. Cities in Europe (Milan for example) are thinking about ways to limit car use to maintain low air pollution post initial lockdown. In China, car sales are up because people don’t want to take public transport. Here, on the North Shore, could we take this unprecedented opportunity to keep seven percent of vehicles off roads by making walking and cycling safer and more convenient without spending a ton of money?

Seriously what has held us back? All three North Shore municipal governments already have transportation and official community plans that say they will encourage every other form of transportation over single-occupancy vehicles. But we’ve been saying that for ages without any real progress. The plans are all there in black and white with photos of smiling cyclists and pedestrians on the websites.

The last long-term transportation plan the City of North Vancouver minted was in 2008. A key direction was to reduce reliance on single-occupant travel. “Increasing the provision of accessible and convenient transportation choices as attractive alternatives to single-occupant vehicles will help reduce local and regional GHG emissions and will foster a healthy lifestyle for the community.”

In the 2014 Official Community Plan, in the transportation section, the city said it would “prioritize walking, cycling, transit and goods movement over single-occupancy vehicles.”

This is not science fiction. It comes right from the plan.

The District of North Vancouver last wrote a transportation plan in 2012. The program intends to deliver a sustainable transportation network supporting the 2011 Official Community Plan. It includes actions that will increase trips made by walking, cycling and transit from 21 per cent in 2011 to more than 35 per cent in 2030.

For a minimum of 10 years, all of our municipalities – even West Vancouver – have had plans to make active transportation more attractive. Really? There’s obviously a pretty vast disconnect between what we say we will do and what we accomplish. Even in the most progressive municipality – the City of North Vancouver – cycling only accounts for 2 per cent of all trips, though walking fairs better at 11 per cent.

We are all experiencing the weird life-o-pause that is COVID-19. More people are turning to walking and cycling, living la vida local. Let’s think now about how walking and cycling can at the very least help eliminate congestion when we return to “normal.” And, at best, can reduce greenhouse gas emissions and noise, as well as improve air quality and our health.

After all, that’s what we’ve been saying we want for the last 10 years. All it took was a global pandemic to get us rolling.

Heather Drugge is a sustainable transportation advocate who has used her bike for transportation for 20 years. She’s looking at getting an e-bike and maybe a jetpack next. Northshoremoves@gmail.com.