OPINION: Vancouver should stop bothering Seattle and get its own MLB team

How do we avoid a civil war between Seattle and Vancouver? Let’s build a big baseball stadium, and bring Major League Baseball here.
Sep 5, 2019 7:12 AM By: Andy Prest 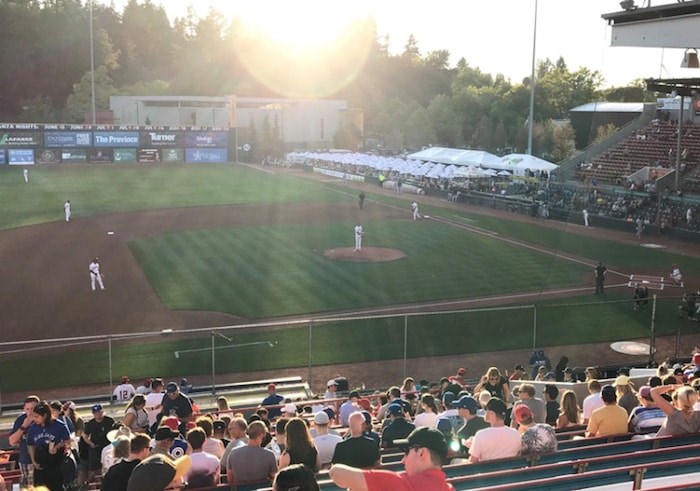 We’re at a crossroads here, Vancouver. Either we build a big baseball stadium or we go to war with Seattle.

Those seem to be the only two options following another contentious encounter at the home field of the Seattle Mariners. Once a year the Toronto Blue Jays play a series in Seattle, and every time that happens a huge contingent of fans from Vancouver and across Western Canada trek down to Washington.

Some are there simply because Seattle is the closest place to catch any Major League Baseball, but most are there to see the Blue Jays, Canada’s de facto national team. Canadians fill the Seattle stadium with Maple Leaf flags, Blue Jays gear and apologies, making up well more than half the crowd for many of these contests.

This, in turn, angers many of the hardcore Seattle Mariners fans, who for at least one series a year see their stadium invaded and suddenly become the drowned-out road team even though they are watching the game at home.

The anger is palpable each year, and inevitably some Seattleite will start firing shots north of the border in the midst of the Blue Jays invasion. This year it was famous Jeopardy! contestant and proud Seattleite Ken Jennings who started the counter-attack, tweeting this: “My favorite summer thing in Seattle is when 20,000 surprisingly awful Canadians drive down to watch a Blue Jays game and then the Mariners win.”

Then, just to prove he was serious about this war against Canada, he punched old friend Alex Trebek square in the face.

“What is pain!” he screamed, in the form of a question.

OK, that last part isn’t true – nobody messes with Trebek – but the Seattle saltiness about the Blue Jays and their boisterous fans is very real. It’s understandable too. Nobody wants to feel unwelcome in their own home.

It’s too bad, because in many ways we are basically the same people. Emotionally closed hipster/nerds driving around in Subarus and Birkenstocks relying on coffee and weed to help power through months of unending rain ... does any of that sound familiar?

So how do we avoid this civil war? Let’s build a big baseball stadium, and bring Major League Baseball here.

This thought occurred to me last week when I took in a Vancouver Canadians game at beautiful Nat Bailey Stadium. Staff ace Adam Kloffenstein – a big Blue Jays prospect who just turned 19 years old – was dealing for the Canadians, and Ryan Sloniger capped off a ninth-inning rally with a two-out, RBI single to give Vancouver a come-from-behind 8-7 win. The Vancouver crowd went wild, which is saying something because Ryan Sloniger isn’t exactly a household name just yet. Sloniger in fact hails from Punxsutawney, Pa., which means he’s got a long way to go to surpass his hometown’s most famous resident, a groundhog.

This is, after all, a team playing something called Class A Short Season minor league baseball, which on the ladder of professional baseball is basically the sidewalk. And this season Vancouver was a sub-.500 team that didn’t make the playoffs. That didn’t matter to the fans though. The Canadians organization puts on a great show at that beautiful stadium, and Vancouver fans love watching baseball in the summer sun. The park is sold out nearly every game, and the club already owns the attendance record for the Northwest League, averaging more than 6,000 fans per game in their 6,413-seat stadium.

That’s just a few thousand fans less than the Miami Marlins are drawing for home games this year, and the Marlins play in the Majors while the most famous Vancouver Canadians player of recent years is probably wasabi from the sushi race.

The math, from there, seems simple. Take those thousands of fans who spend thousands of dollars each year to go to Seattle to watch the Jays each year, add them to those 6,000-plus fans who fill Nat Bailey all summer, and you’ve got a ready-made fan base for Big League ball in Vancouver.

This isn’t like basketball, where there is no success story like the Vancouver Canadians to build upon. This isn’t like hockey, where Vancouver already has a team that is almost NHL calibre. British Columbia is a baseball province, and Vancouver has a proud baseball history. Look at the Canadian Little League Championships: the tournament has been held 61 times, and B.C. has won 28 of them.

This seems like the only sensible solution. Seattle may be similar to us, but I don’t think a war would end well for us. Our side might be armed with universal health care, but the other is armed with guns.

We could start our own Major League team, and then we wouldn’t have to fight with Seattle anymore. We could go back to doing what we do best: not liking Toronto.