Your crappy barbecue brush is a health menace

Wayward bristles from barbecues have reportedly caused 28 injuries since 2004 in Canada. Yet they are still readily available while the Standards Council of Canada continues to develop “new guidelines for the product.
Grant Lawrence Jul 4, 2018 7:56 AM 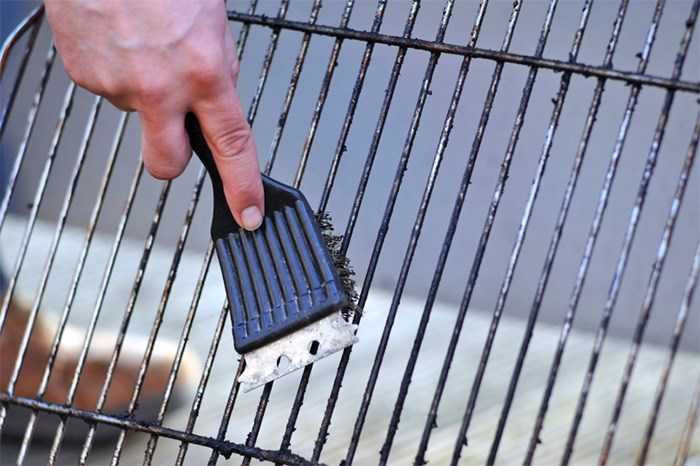 Wayward bristles from barbecues have reportedly caused 28 injuries since 2004 in Canada. Yet they are still readily available while the Standards Council of Canada continues to develop “new guidelines for the product.” Photo iStock

When you find hair in your food, does it freak you out? As gross as that may be, discovering someone else’s locks in your burger won’t kill you, or even seriously harm you. However, if a loose wire from a crappy barbeque brush makes it past the patty and into your mouth, or worse, down your throat, it can really mess you up.

As you gather around your barbeque this summer season, take heed. Last year, according to the Standards Council of Canada, at least nine people in Canada were injured after ingesting metal bristles that became detached from barbeque brushes.

Here’s what happens: You take your cheap barbeque brush and attempt to vigorously clean the charred crap off your grill from last night or last weekend or last year. You don’t even notice when your cheap brush loses some of its razor sharp, tiny steel bristles, which can cling to the gunk remaining on grill. Later, when you start flipping burgers, the bristles can got lodged in your food, and then could end up in your throat, or worse, your children’s. Surgery is often an end result.

After feeling the heat from consumers, Health Canada fired up the burners to ban the meddlesome brushes, but eventually decided against it, even after admitting that wayward bristles have reportedly caused 28 injuries since 2004.

There is at least something being done, although it may seem like a bit of a smokescreen. According to a National Post article, instead of banning the brushes outright, Health Canada commissioned the Standards Council of Canada to develop “new guidelines for the product.” However, it could be up to a year and a half before those “guidelines” are put into practice, and barbeque season is now.

I recently passed through a few of the big box stores on Cambie Street, and couldn’t help but notice sweeping selections of these exact types of cheap, plastic-handled barbeque brushes on sale in every store I entered.

I asked an employee working the barbeque section if he was aware the brushes had the potential to cause injury.

“Well, obviously a lot of the products in this store have the potential to cause injury if you don’t use them right,” he told me. “A hammer will do a lot of damage if you aren’t looking at where you’re swinging it. It’s usually not the product’s fault, eh, it’s the users. Same goes for the barbeque brushes. They’re obviously a very useful tool at this time of year or we wouldn’t be selling them, so…”

Uh huh. I’ve never heard of a hammer getting lodged in someone’s digestive tract, but I decided against taking the conversation any further. Instead, I’ll offer you a few barbeque brush bypasses.

When I popped the top of my barbeque to start the season, the grill was rusty, gunk and, because I live in East Van, sprinkled liberally with rat shit. A natural and cheap way to clean all of that off without using a barbeque brush or harmful chemicals is to first wipe or hose off the rat shit, then take your grill and place it in a garbage bag. Pour one cup of baking soda mixed with two cups of white vinegar into the bag. Seal it and leave it sitting overnight. You’ll be amazed at the cleanliness of your grill in 24 hours.

Throughout the season, instead of a barbeque brush, scrub down a warm grill before each use with an onion sliced in half. The onion not only removes the crud, but also naturally disinfects the grill. Avoid using rolled up balls of aluminum foil (cringing as I type), sandpaper (seen it happen), or brushes of any kind.

Here’s wishing you a safe and happy summer season on the grill. But promise me you’ll throw out that bristly barbeque brush now before things get hairy.