Our first and only child, Iliyan, was 6 weeks old when we learned that he had bilateral severe-to-profound hearing loss, meaning that he was born deaf.

This came as a shock to us and, as with the majority of parents of deaf children, he was the first deaf person we had ever met.

As new parents we were already filled with worry and anxiety about the usual things like, is he eating enough? Is he sleeping enough? (Will we ever sleep again!?)

Now with the added layer of having to learn how to parent a deaf child, it was safe to say we were overwhelmed at the very least.

Within hours of Iliyan’s identification as a deaf child we received a call from the BC Early Hearing Program checking in on us, how we as parents were feeling. Our coordinator also provided some information and assured us that we would have access to information, speech-language pathologists, other experts and, most importantly, other parents, since we had some important choices ahead of us as we learned how to parent a deaf child.

We chose to obtain our early intervention services from the BC Family Hearing Resource Centre, which we felt was a good fit for us, though all three provincial agencies provide exceptional services. We decided early on that for our family, communication was critical, regardless of whether it was in American Sign Language (ASL) or in spoken English, and with the support of the BC Family Hearing Resource Centre we began to learn ASL, as well as prepared for our son to receive cochlear implants if and when he was eligible.

Iliyan took to signing right away. In fact, he signed his first word at 9 months. To our dismay, his first word was neither “mum” nor “dad” but “light." We decided as a family that it would be important for Iliyan to meet as many Deaf and hard of hearing children and adults, who choose to communicate in a number of ways, in order to normalize his deafness and hearing equipment, as well as for us to connect with more people and families.

We had the good fortune of meeting Nigel Howard a few years ago, when Iliyan had recently received his cochlear implants and was communicating using both sign and spoken English. Iliyan adored meeting him, and still remembers one of the signs that Nigel taught him - the sign for “boot.”

Fast forward to the last few months, Ilyan is now four and a half and seeing Nigel signing alongside Dr. Bonnie Henry has made him so proud to be deaf. When we purchased a few “Listen to Nigel” posters, Iliyan immediately asked that we hang one in his room, and post one outside our house.

Having Nigel – and his poster – has given Iliyan a real life superhero that he looks up to and can identify with, especially in a world where we don’t often get to see Deaf people in prominent positions in media, using ASL.

Partial proceeds from V.I.A.'s "Listen to Nigel" posters are being donated to the Deaf Children's Society of B.C.. You can order them HERE. 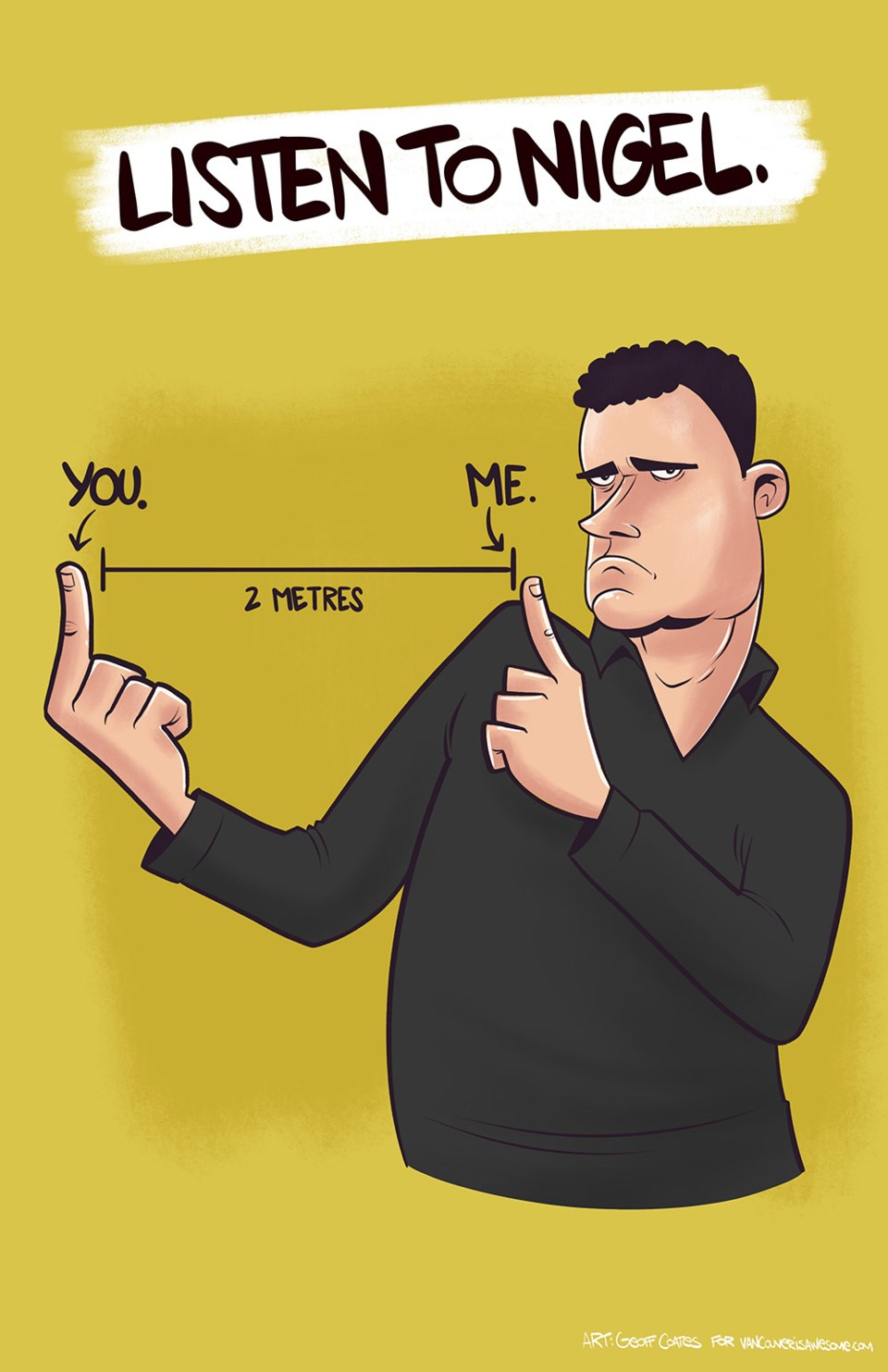 Opinion: How to teach children about climate change, inspire hope and take action to change the future
Jan 27, 2022 3:11 PM

Opinion: The death of caremongering: Canadians are tired and most believe getting COVID-19 is inevitable
Jan 27, 2022 9:55 AM
Comments