Smoke getting in your eyes, Vancouver? Get used to it.

Songwriter Doug Francis Mitchell is right when he sings that “we’re going to have to learn to cope.” With increasingly smoked out summers, it means that each and every one of us must become responsible stewards of our land and forests. Don’t even think about lighting that match. And get used to it.
Aug 21, 2018 3:46 PM By: Grant Lawrence

That’s the title of a smokin’ new song I was sent this week by Cranbrook singer-songwriter Doug Francis Mitchell. Here’s a harsh toke of the lyrics:

“Whether you believe it or whether you don’t / Our weather is changing and it ain’t no hoax / Doesn’t matter which way you vote / We’re going to have to learn to cope / With more smoke, more heat, no rain for weeks / Better get used to it folks.” 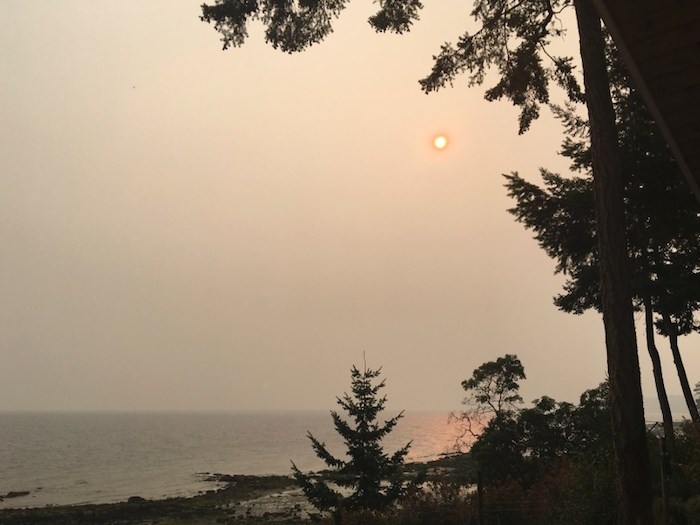 It may not be the second coming of “Blowing in the Wind,” but the song gets the point across: the dog days of summer in B.C., and most of Western Canada, means smoke, and it sucks. Big time.

A large percentage of B.C. forest fires are lightning caused. Depending on what you believe, this summer’s higher-than-usual lightning bursts are either a result of climate change or a perfectly natural occurrence.

But when lightning strikes excessive fuel such as pine beetle kill considered by many to be a result of climate change, the forest ignites.

Unfortunately, our human existence in pretty much all of these territories means we cannot let Mother Nature complete her cycle. Brave souls by the thousands must try to intervene to save homes, businesses, communities and lives.

As of this week, there were 560-plus fires burning in B.C. There have been more than 1,900 wildfires this year to date.

It’s estimated that humans have been the cause of roughly 460 fires in 2018. Breathe that in for a moment. That means that about one quarter of the fires could have been caused by ignorant idiots being reckless and selfish in our tinderbox province; one or two people igniting an inferno causes everything from discomfort to misery for millions.

Some people make mistakes. I know of one fire in a remote place that destroyed a barn and spread into the forest. It was supposedly caused by oily rags spontaneously combusting when temperatures hit the high 30s.

Other times, you get lucky.

In July, I attended a “float party” in Desolation Sound. Everyone was to meet on our boats at a small island for a barbeque. Come sunset, we’d raft up our boats and drift with the current to watch the moon rise. It was a beautiful, clear summer evening.

I smelled the smoke before I arrived at the party. This was Desolation Sound so I’m used to a certain kind of purple haze that often floats with the breeze. But this wasn’t pot. I figured maybe they had cedar plank salmon on the barbeque.

Nope. When I came ashore, I said hello to a few people, but I could still smell something burning, as could others.

I followed my nose, which led me up a mossy bluff on the island, and there it was: in a shallow gully, a telltale plume of grey smoke twisted its way up from within the thick, crunchy moss. I immediately dumped out my entire can of Lucky Lager onto the source.

Within seconds, the smoke twisted up again, like a ghostly hula dancer. My heart began to pound. I was staring down at the earliest stages of what could easily become yet another devastating forest fire.

I called out to the rest of the party — a collection of oyster farmers, summer residents and local scallywags — that the moss was burning. We dumped several buckets of water onto it, but persistent plumes of smoke kept popping up, Whack-A-Mole style, at different spots in the gully.

Soon, a chain gang formed from the ocean to the bluff, dumping bucket after bucket into the smouldering moss that was just inches away from a patch of parched pine and fir trees that were ready to go up like match sticks.

It took a dousing of at least 60 full buckets of water and digging up the entire gully to finally kill the burn. Even then, we were nervous about leaving the island, until a retired park ranger who was in attendance at the party offered to anchor his sailboat beside the island overnight to keep watch.

What caused it? There hadn’t been any lightning. None of the partiers would admit to carelessly tossing their butt or roach into the moss. It very well could have been smoldering for hours, the result of previous irresponsible campers or tourists.

We’ll never know but, luckily, we caught that potential blaze before flames could erupt. At least 460 other times this summer, people haven’t been as fortunate as we were that bone-dry evening in Desolation Sound.

Songwriter Doug Francis Mitchell is right when he sings that “we’re going to have to learn to cope.” With increasingly smoked out summers, it means that each and every one of us must become responsible stewards of our land and forests. Don’t even think about lighting that match. And get used to it.