The City of Burnaby recently made significant changes to the Willingdon Avenue and Beresford Street intersection, by installing a cement barrier, but some say its worse than before.
0
Jul 27, 2019 4:22 PM By: Chris Campbell
If you’ve ever passed by the intersection of Willingdon Avenue and Beresford Street, you won’t be shocked that I often refer to it as the “dumbest intersection in Burnaby.” (Or just the "most infuriating.") 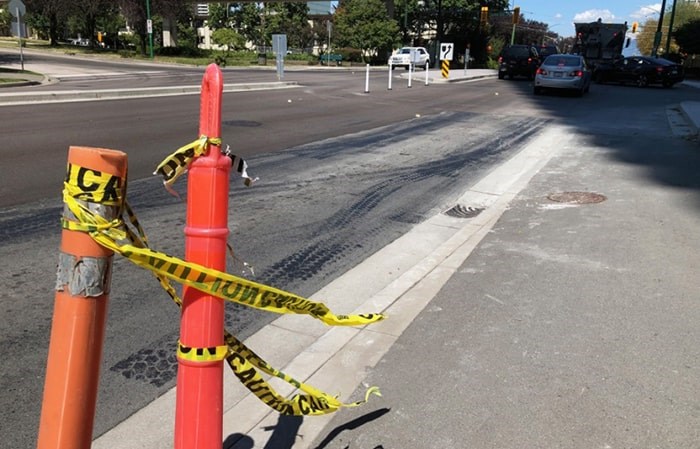 Willingdon and Beresford after city changes adding cement barriers and a left lane so drivers can go west on Beresford. Some cyclists are unhappy with the changes. Chris Campbell Photo

This four-way intersection was an urban planner’s nightmare – with vehicles, pedestrians and cyclists all trying to negotiate it. I especially enjoyed the criss-cross pattern in the middle that tried in vain to get drivers to not stop in the middle of the intersection.

You’ll notice that I’m using past-tense to description this intersection. That’s because the City of Burnaby recently made significant changes by installing a cement barrier.

I visited the site on Friday to see how it’s working. The situation for drivers is better because they aren’t trying to inch across the intersection along Beresford, creating angry conflicts with drivers on Willingdon.

But there is still some evident mayhem with drivers trying to turn right onto Willingdon from Beresford during peak times.

That’s just drivers, though. The reaction from cyclists has been swiftly negative.

“Seriously, Burnaby?” tweeted Coun. Patrick Johnstone, a City of New Westminster politician and avid cyclist. “This was already one of the least safe intersections for cyclists on the BC Parkway, and now you made it worse? No regard for the inter-regional bikeway at all. No wonder cyclists risk (their) lives on Kingsway.”

The BC Parkway is an east-west path used by pedestrians and cyclists underneath the SkyTrain line. It comes to abrupt halt now at Willingdon, with no room for cyclists to get across. They have to go to Central Boulevard now.

For Johnstone, according to his tweet, the City of Burnaby has its emphasis wrong when it comes to cycling infrastructure.

“They do some things well, but there appears to be a bias towards ‘bicycles for fun’ as opposed to ‘bicycles for transport’ in their infrastructure designs,” Johnstone tweeted. “Parks and meandering trails they have some great work, urban intersections are a disaster.”

Johnstone – who did tweet that his own city has “a lot of work to do on this front as well” – said too often cyclists in the Central Boulevard area are “forced to sidewalks, conflict at every intersection. It is horrible.”

Many people reacted and commented to Johnstone’s tweets, with @Berril_Perks tweeting: “The entire section of the B.C. Parkway from imperial to Willingdon is poor due to forced mixing of pedestrians and cyclists. At this point I always cross at the lights just to the right of this crossing. You have to almost walk through due to the shared pathway.”

Richard Campbell (no relation) tweeted that this intersection would be good for an underpass to people can cross under Willingdon.

I received an email this morning from a City of Burnaby engineering staff member – who didn’t want their name used – who said that cyclists should know that the city is working with TransLink on the BC Parkway pathway. The plan is to eventually create an “enhanced crossing at the adjacent Central Blvd/Willingdon Ave intersection,” with a goal of eventually separating “pedestrians from cyclists on the BC Parkway starting with the higher activity areas.”

Knowing the glacial pace these projects move at, who knows when this will happen but at least it’s on the radar of the city and TransLink.

The changes at Beresford and Willingdon are also having unintended consequences, according to area resident Sanjeet Shivkar.

“Drivers have now started going further down the road towards Mayberry Street and taking risky and sudden U-turns, putting both the oncoming traffic on the opposite lane in danger, as well as the risk of a pile up,” he said.

Shivkar called the intersection changes “good” overall, but he wants the city to look at enforcement due to drivers now pulling U-turns.

According to the email from the city engineering department, for drivers on Beresford “inconvenienced by the safety measures, additional measures are planned. Number one, a left-turn signal arrow for southbound to eastbound left turn from Willingdon onto Maywood (this year), and the southerly extension of McKay Ave from Central Blvd to Beresford St (future). This will provide safer and alternative routes to travel.”

That might stop some of the U-turns, but I still think drivers will pull these dangerous moves because many people make short-sighted decisions in the moment. But that’s not the city’s fault.