"Dad, somebody named Sarah is inviting me to a conversation party. What is that?" is what my 10-year-old son said to me as we were driving this past weekend. He had received a text message on his phone and was trying to make sense of it.
Aug 19, 2019 2:42 PM By: Bob Kronbauer

"Dad, somebody named Sarah is inviting me to a conversation party. What is that?" is what my 10-year-old son said to me as we were driving this past weekend.

He had received a text message on his phone and was trying to make sense of it.

I pulled over to the side of the road, urged him to "Let me see that!" and he handed me his Samsung from the back seat.

As it turns out it was a text message from "Sarah" of the Conservative Party, not the conversation party.

"Sarah" wanted to know if the they can count on this elementary-school-aged kid for his support in the upcoming election.

It would seem as though they're not any smarter than the fifth grader.

The boy has a phone so he can keep in touch with his mother and I when he's at friends' houses. That's the primary use.

When it comes to digital devices and the internet, he's pretty savvy.

After explaining to him who "Sarah" was and what she was asking, I enquired "What are you going to send back to her?"

I told him that was the correct answer, and that it was strange that she (they) had his number in the first place. He agreed. 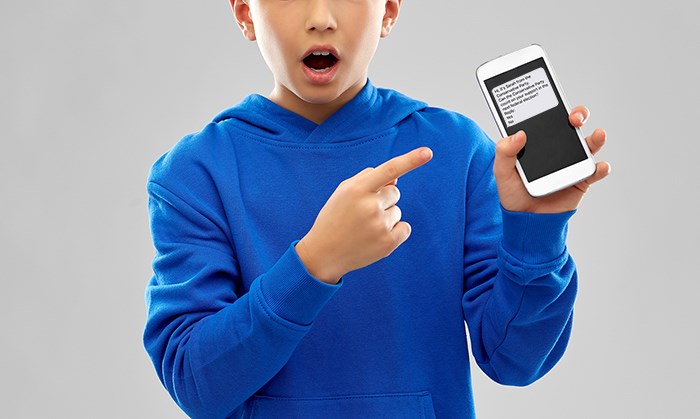 The Conservative Party has a fairly robust section of their website that outlines their privacy policy, explaining how they get information on voters, what they do with it, and why.

My guess is that my kid got somebody's old number when we got him his phone a few months ago. His number definitely isn't tied to his name or his age in their database, and I imagine the person who had the number previously had made their way onto thier list somehow.

"If you no longer wish to receive phone calls or mail from the Conservative Party, you may contact us at servicedesk@conservative.ca. Please include your name, address and phone number so we can accurately deal with your request."

I suppose I'll tell my son to email them... once he gets an email address?

In the meantime it might behoove the Conservatives to update their records of active voters and/or offer an opt-out directly from the spam text messages they're sending out.

This is Vancouver's Stupidest Politics Column. Read the archives HERE.