A construction crew placed big orange road signs right in the middle of the bike lanes – meaning cyclists would either have to hop their bikes up on the curb or go left into traffic.
Chris Campbell Aug 13, 2019 7:01 AM 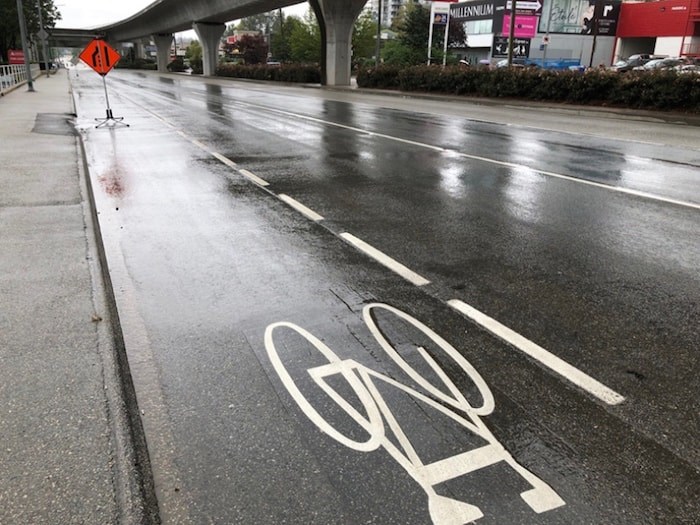 Several spots along this bike lane were blocked by construction signs on Lougheed Highway in Burnaby. Photo by Chris Campbell/Burnaby NOW

The City of Burnaby takes a lot of heat for its system of bike lanes.

Cyclists have messaged me repeatedly with criticism for poorly marked bike lanes, or areas that could really use protected bike lanes.

Some of the heat is unfair because the city is working on an expanded plan that simply takes time to implement. Other criticisms are right on the mark.

One issue that cropped up that seems like an easy fix. Cyclist Richard Campbell (no relation) tweeted the city about construction signs actually being placed in the middle of a bike lane on Lougheed Highway at Brentwood.

I drove by there on Sunday and, yep, there were big orange road signs placed right in the middle of the bike lanes – meaning cyclists would either have to hop their bikes up on the curb or go left into traffic.

Hey @CityofBurnaby Please tell crews not to block bike lanes with signs. Dangerous. Especially those with the high viz portion not facing traffic. Hard to see in photo. On Lougheed eastbound east of Willingdon. pic.twitter.com/srblFWIPoF

Not exactly a great choice.

I don’t know why some person thought this was a good idea. Perhaps better training on cycling is needed so work crews will show better judgment. It’s not an easy situation because you can’t put the sign up on the sidewalk – making life difficult for pedestrians, especially those with mobility issues.

But there has to be a better solution than this. We’re trying to make a move into a more pedestrian and cycling-friendly culture. This is not the way to do it.