Opinion: If Mayor Kennedy Stewart made the VPD’s job harder, they need to prove it

The Vancouver Police Department has publicly accused Vancouver Mayor Kennedy Stewart of making their job harder, but they haven’t explained how exactly
Jul 7, 2021 11:07 AM By: Mo Amir 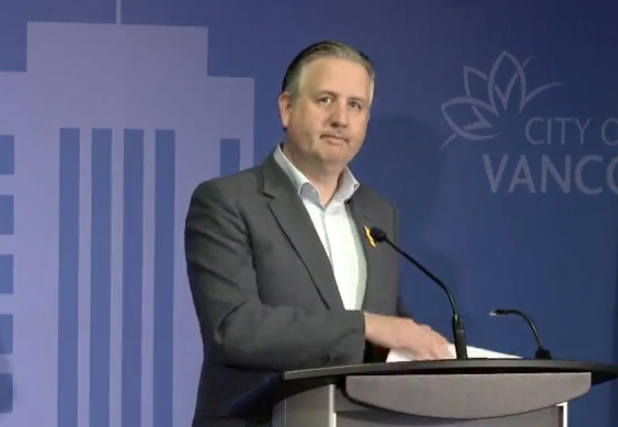 Kennedy Stewart speaking at a press conference on April 8, 2020. Screengrab

Policing is a tough profession, but it’s not above accountability.

The duties, responsibilities, and dangers assumed by police officers warrant a fair compensation. Cops are entrusted to equitably wield the necessary authority, with the appropriate amount of force as required in each unique situation, to uphold the public’s safety.

This power, however, demands that police officers be answerable to that very public. Being held to a high standard is in the job description.

Not since the 1940s when then-Vancouver Mayor, Gerry McGeer, ran populist campaigns on police reform has the VPD’s relationship with the city’s mayor been so fraught.

Palmer was also the President of the Canadian Association of Chiefs of Police at that time. His successor in that role, Waterloo Police Chief Bryan Larkin, publicly declared that systemic racism exists in Canadian policing — almost immediately after Palmer’s term ended in August 2020.

Yet Chief Palmer maintains his public disagreement with Mayor Stewart.

This rift surged over the last year. In July 2020, Vancouver City Council voted to abolish street checks, which the VPD’s own data revealed to disproportionately target Black and Indigenous residents. In April 2021, the Vancouver School Board voted to end its school liaison officer program with the VPD. In June 2021, Mayor Stewart stepped down as the spokesperson for the Vancouver Police Board, citing the board’s positions as “indefensible”.

In both egregious cases, VPD offered little explanation beyond the incidents being regrettable and unfortunate.

Other questionable incidents emerged on social media in the last month: A VPD officer lunging at the neck of a Black man who was already handcuffed while a young white man punched police officers without apprehension; A Black woman being handcuffed for playing basketball on public school property during a weekend.

In June, Sgt. Blair Canning — Chief Palmer’s old partner — filed a complaint to the Vancouver Police Board that Stewart’s comments had created a “toxic work environment”, contributing to an increase in assaults against officers and a challenge in recruitment. Last week, Sgt. Mark Christensen tweeted that Stewart’s lack of support does not make policing — an increasingly difficult job in the last few years, in his opinion — any easier.

However, neither Canning nor Christensen qualified these accusations with causal evidence.

It wasn’t exactly a compelling case.

Despite hysteria from 2022 Vancouver mayoral candidates and local radio talk show hosts, incidents of criminal offences actually decreased by 18.6% in 2020 compared to 2019. Calls for service were down 10.7%.

This year — January to May — criminal incidents are down nearly 21% compared to the same period last year.

It’s unclear, then, how exactly Stewart has made the VPD’s job so much harder.

What is clear, however, is that the Vancouver Police Department must be accountable to the public whether in explaining a spate of seemingly race-based policing decisions or making labour-based accusations against the Mayor. In practical terms alone, it’s hard to sympathize with the VPD otherwise.

Mo Amir is the host of This is VANCOLOUR, a politics and culture podcast available on Apple Podcasts, Spotify, Google Podcasts, and thisisvancolour.com