Kyla Lee is a Vancouver Criminal Lawyer focusing primarily on DUI, impaired driving, and Immediate Roadside Prohibition cases. ********** Police blocked off West Esplanade for hours as they investigated the death of a cyclist on Jan 27, 2019.
0
Jul 18, 2019 9:14 AM By: Guest Op-Ed 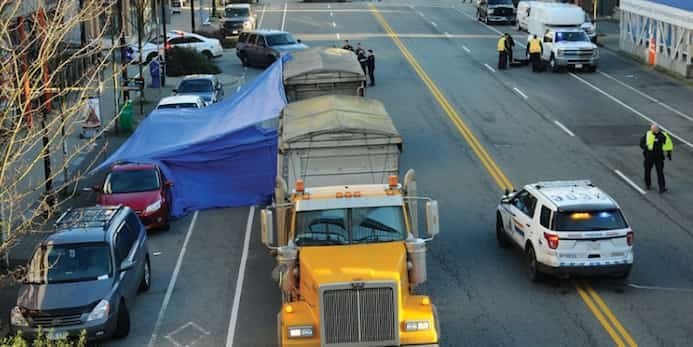 Police blocked off West Esplanade for hours as they investigated the death of a cyclist on Jan 27, 2019. A North Vancouver man has now been charged. Photo Cindy Goodman / North Shore News

About a year ago, a man in Vancouver was tragically killed in an accident. A careless driver did not check his blind spot or his mirrors when opening the door to his vehicle, and a cyclist was struck by the opened door. The cyclist died.

Now, the police have concluded their investigation into the death and the driver has been issued a ticket for unsafely opening the door of his vehicle. This is a lesser-known section of the Motor Vehicle Act and not one that triggers any penalty points. The fine is only $81. And this consequence has sparked outrage amongst the cycling community and the public at large.

While it may be uncomfortable to consider the fact that the consequences for killing another person are an $81 fine, the reality is that this fine properly addresses the conduct.

In Canadian law, including in cases of death or bodily harm, we do not punish people based on what the consequences of their actions were. Instead, we punish people based on their level of “moral blameworthiness.” This looks at how morally responsible the person is for what they did. For example, a person who intentionally engages in a course of conduct to kill another person is considered the most morally blameworthy. They can be convicted of first-degree murder and given the longest sentence known to Canadian law.

But a person who is reckless in their conduct, and whose recklessness causes the unplanned death of another person would not face a first-degree murder charge. Instead, they are charged with manslaughter, or depending on the degree of recklessness, criminal negligence causing death. The reason they would receive a lesser charge and ultimately a lesser sentence is because they are less morally responsible for their actions than the planned and deliberate killer.

A person who negligently opens a door is even less reckless than the manslaughter example.

Let’s not hold ourselves above scrutiny and pretend that we have never, ever opened the door to a vehicle without first looking to see if there was an oncoming cyclist. The reality is that anyone who has opened a vehicle door is guilty of this.

The Motor Vehicle Act, which is the legislation under which the driver was charged, is also an important document to consider here. The purpose of the Motor Vehicle Act is to exhaustively regulate all conduct related to motor vehicles, their movement, and their operation. When a penalty is specified in the Motor Vehicle Act, the government has chosen specifically to limit the maximum that can be imposed for that offence.

Although provincial offences can carry fines of up to $2000 under the Offence Act, if a fine is set in the Motor Vehicle Act regulations, the Offence Act cannot replace that with a higher fine. This is due to a principle known as “legislative intent.” The more specific legislation is about a consequence or a penalty or an element of an offence, the more clear their intent becomes.

For the so-called “dooring” offence, the government mandated an $81 fine. And there is good reason for that.

The driver of a motor vehicle owes a duty of care to other road users. But the duty owed by a passenger is less so. Particularly when passengers may not even hold drivers licenses and understand the rules of the road. This ticket does not distinguish between the driver opening the door and the passenger doing so.

Because the offence does not distinguish between these individuals or the location in the vehicle, so too can the penalty not be disproportionate to the gravity of the offending conduct.

All the driver in this case did was momentarily forget to look behind him when doing a completely normal and lawful action: opening a car door. He did not do anything that showed a disregard for life or safety. He simply made a mistake. One that we could all have made.

If you’d like to submit an op-ed regarding an issue that affects Vancouver please send to our Editor-In-Chief Bob Kronbauer at bobk@vancouverisawesome.com for consideration