Even in the face of a relatively significant COVID-19 outbreak in Kelowna, she's sticking to a stance she outlined in June
Jul 20, 2020 8:08 AM By: Les Leyne 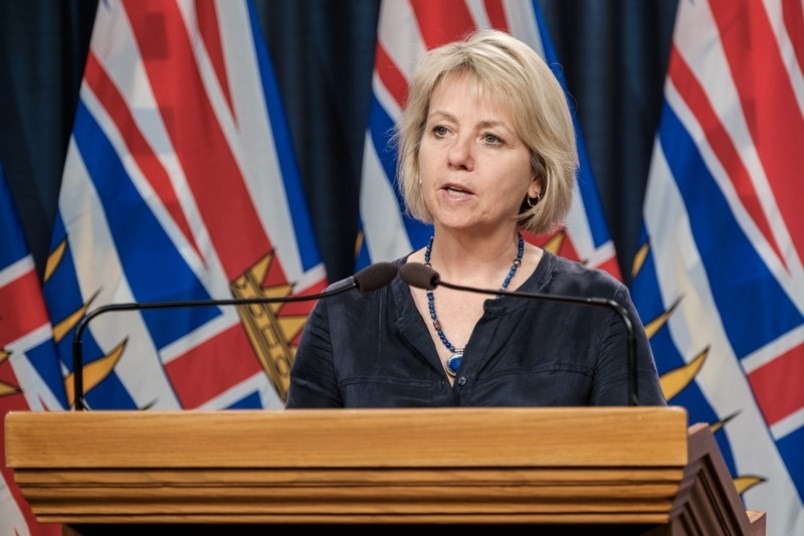 Even in the face of a relatively significant COVID-19 outbreak in Kelowna, provincial health officer Dr. Bonnie Henry is sticking to a stance she outlined last month.

She wants the gradual re-opening of B.C. to move forward, not back. So there won’t be any reverting to a more restrictive phase of the emergency, unless something dramatic develops in the hospitalization rate.

Henry gave a briefing Friday to reassure people about a few concerning developments around B.C. One of them was a community outbreak in Kelowna that emerged after Canada Day and has now grown to 35 people, most of them young adults.

Based on the number of events in that region linked to the outbreak, there will more cases to come, she warned. Health officials have done contract tracing and are waiting for more people who were exposed to develop symptoms.

“These flare ups in our communities around the province are a concern. It’s not necessarily unexpected, but it is a warning to us that we need to do more to keep things in balance.”

But there was no mention of any imposition of restrictions to deal with the flare-up. Medical and civic leaders met and agreed to reinforce the standard messaging about hygiene and limiting personal exposure. They’re going to cope with these situations under the current phase three protocols, rather than turn back the calendar to the more stringent ones in the spring.

Henry said last month as Phase 3 took hold: “Our whole plan from the very beginning was to move thoughtfully and carefully and slowly through this … We don’t want to go backward. We won’t be going back in terms of phase. We may need to, in certain areas, restrict some types of activities or look at certain situations that are more risky.”

As of Friday, they haven’t seen anything like that yet. So the Kelowna situation, which bumped the number of cases in the Interior by roughly 15 per cent, is a model of what to expect for the rest of the summer. Officials will cope with outbreaks using scientific detective work to track the transmission routes genetically, and a contract tracing approach that has a 98 per cent average so far when it comes to identifying people that carriers of the virus interacted with.

(In Kelowna, they got the first flare-up of cases after July 1 and traced their contacts. When some of those contacts got sick, they traced their contacts. So now they’re on the third generation of contacts, based on the five to seven days it takes to show symptoms, tracking hundreds of people to see if they develop symptoms.)

But re-imposing tougher restrictions will be a last resort.

“If we start seeing more people in hospital … more outbreaks in hospitals … those are when we have to start stepping back on some of the opening up that we’re doing,” said Henry.

There were 18 COVID-19 patients in hospitals as of Friday, which is manageable.

She’s engineering a remarkable balancing act on a province-wide scale. And she’s asking five million people to do the same thing individually — live their lives as fully as possible, but take all the precautions to limit exposure.

Then she added some new 2020 ones: Impose the two-metre rule on all your gatherings. Get the numbers of everyone you invite to parties, to make contact tracing easier if there’s an outbreak.

If you take risks related to the virus, stay away from your grandparents, or people undergoing medical treatment.

The phases B.C. are using amount to educated guesswork on how much of the average person’s everyday contacts before the pandemic can be sustained safely. It was about 30 per cent initially during the most severe restrictions. Phase 3, which has been in effect for almost a month, is figured to be about 60-70 per cent.

Phase 4 would allow for the resumption of conventions, live audience concerts and pro sports and international tourism.

That is a long way off. So the day-by-day balancing in Phase 3 could last a year or more.

Opinion: Every government thinks it has the right answer on trades training
Jun 16, 2021 10:19 AM