I had a major life choice to make: I could bear witness to the Pointed Sticks or I could attend our neighbourhood block party with my family.
0
Jun 24, 2019 4:22 PM By: Grant Lawrence

This past weekend, I had a major life choice to make: I could bear witness to the Pointed Sticks, one of my all-time favourite bands and Vancouver pop-punk originals, performing at the legendary Smilin’ Buddha Cabaret alongside Jerry Hannah from the equally iconic Subhumans, or I could attend our neighbourhood block party with my family.

Maybe I could do both?

Just last week, a reader of this column, who calls himself “Stephen Coldbeer,” went out of his way to refer to me as a navel-gazing, out of touch, “punk-come-yuppie.”

The name-calling was in reference to my opinions on Vancouver living that I share in this space which, to him, run contrary to my decades fronting the Smugglers, an independent touring garage-punk band.

He also noted that I should crawl back into my “sheltered bubble,” which, I suppose, is East Vancouver.

As the beloved East Van band the Boom Booms discovered when they started their “Boom Boom Block Party,” East Vancouverites love to party close to home. That bash quickly became a summer blockbuster for years, raising more than $20,000 for charities, until the event became too huge to manage.

When my wife and I moved to East Van, it was after years of living in the West End. We were used to being slammed by major events that took over the entire neighbourhood: massive gatherings such as the Sun Run, the fireworks and the Pride Parade (luckily we moved out before 4/20 billowed in).

This I also have to admit: There’s something pleasant about getting drunk in the middle of your street, meeting those weird artsy neighbours you always wondered about, hearing about some quirky local history and having the pleasure to simply stumble half a block home on a warm summer night into your own bed, instead of, say, stumbling around downtown trying to flag a cab at 1 a.m. 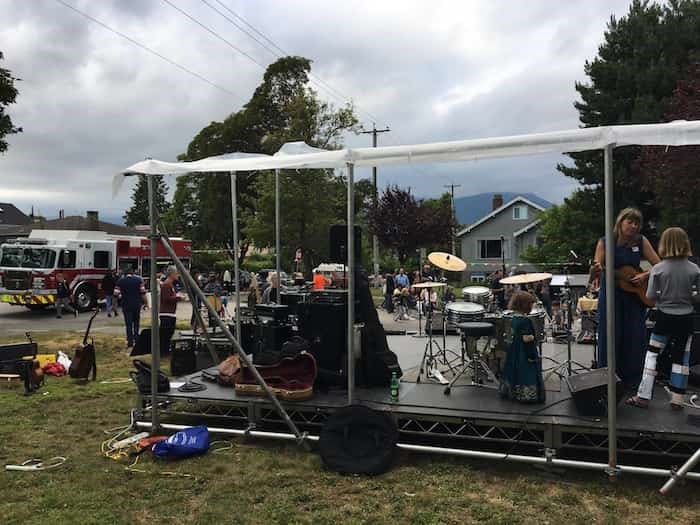 At our block party this year, one of our rocker neighbours stepped up with a full stage and P.A. for the four bands that performed. Another neighbour outfitted all of the tables with freshly picked flowers from her garden. The local church donated tables and chairs. We awarded our local corner store with a community service trophy for their friendliness and longevity. Everyone came out of their homes, bearing dishes of food to share with their neighbours.

I also discovered a cool neighbour living five doors down who not only likes the Gruesomes, one of my most formative bands of yore, but also showed me his Tiki bar complete with bamboo thatched walls and working eight-track stereo, his go-kart (also working) and his totally mint 1963 convertible Pontiac Parisenne (also working), all tucked inside one of those unassuming East Van garages.

Back at the block party, between refereeing the ball hockey game and light sabre fights, I stole a glance at my phone to see if the Pointed Sticks had taken the stage yet, down at the Smilin’ Buddha. Maybe there was still a chance?

When I looked up, I noticed a group of young punks over on the fringe of the block party. They were sprawled out on the grass in their skinny black jeans and worn-out Chuck Taylors in the last rays of the setting sun, enjoying cans of beer in the street unchallenged, but clearly too cool to join in the domestic fray.

As a light sabre smacked me across the back, swung by my own feral, barefoot son, I put my phone away and turned back to the block party in full swing. I cracked a beer and felt that punk candle within me flicker again, melting away like my daughter’s unsanctioned third purple popsicle.

Maybe Stephen Coldbeer is right. It turns out all of my worrying didn’t matter. I’m so out of touch I didn’t realize until later the Pointed Sticks’ gig had occurred the night before. I had completely missed it.

See you next year at the block party?