Jagmeet Singh, Justin Trudeau, Elizabeth May, the Bloc guy, Andrew Scheer and Maxime Bernier. File photos If you didn't tune in to the leadership debate tonight, I don't blame you. A 4:00 p.m.
Oct 7, 2019 8:12 PM By: Bob Kronbauer 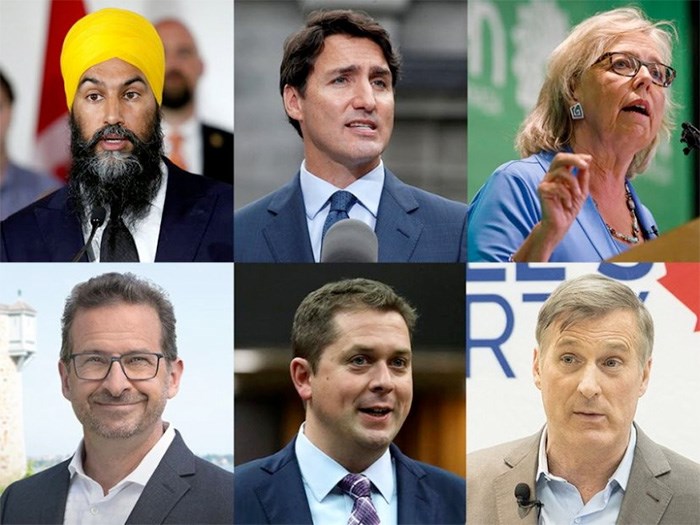 If you didn't tune in to the leadership debate tonight, I don't blame you.

A 4:00 p.m. PST start left most of you in the position of having to take time off work just to watch it.

As the internet would say, "ain't nobody got time for that."

So I jumped on the grenade for you and took one for the team.

HERE is a Twitter thread I composed while taking in two hours of Elizabeth May, Justin Trudeau, Andrew Scheer, Maxime Bernier, the Bloc Quebecois leader whose name I've already forgotten, and Jagmeet Singh.

All standing on a stage, doing political leader type stuff, like talking over each other for extended periods of time so that it's hard to decipher what they're actually trying to convey.

We didn't learn a whole lot of new stuff in regards to policy from the affair, however we did find out that Maxime Bernier considers the People's Party of Canada to be "the only real environmentalist party" in Canada.

And that May seems to be the most woke of all of the leaders.

Wait, maybe we already knew that.

Anyway, Andrew Scheer and Justin Trudeau sucked most of the air out of the room bickering at one another, with the other leaders getting the odd jab in.

And somehow, quite surprisingly, the underdog appeared to come out on top.

In a totally scientific poll I conducted after the debate on Twitter (zero percent margin of error I tell you), 195 people voted and the majority of them said he won the thing.

However you will see that the total votes somehow add up to 101%. 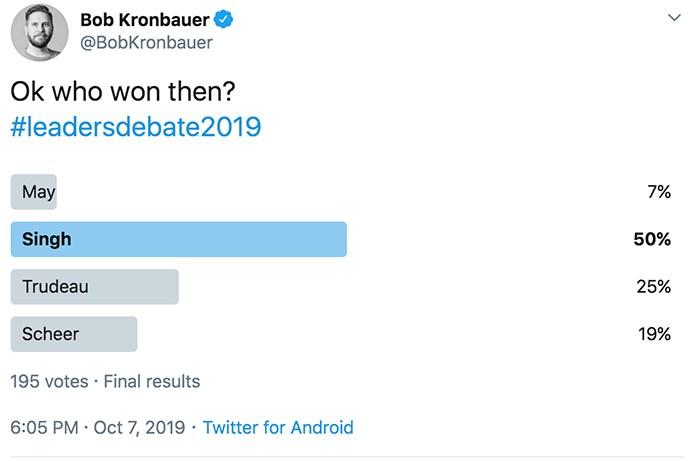 This is Vancouver's Stupidest Politics Column. Read the archive HERE and see all of our not-totally-stupid election coverage HERE.