Opinion: Gluing posters to newspaper boxes is a boneheaded way to promote a climate protest

To say I was upset to find out that Extinction Rebellion (XR) Vancouver organizers decided to glue posters to the fronts of some of our newspaper boxes this week would be an understatement. I was, and am, royally pissed off.

The fact that we'll have to shell out to get their posters removed isn't what gets me; we pay fees to the City of Vancouver to allow us to keep our boxes in public spaces, and a regular item in our budget is reserved for a cleaning company that removes graffiti, stickers, etc, as they are regularly hit by vandals.

Everybody's street boxes get defaced by taggers and random passersby. It comes with the territory, as does a contract with the City that says you have to keep your boxes looking nice.

What's ultimately got me worked up is that whoever adhered the Extinction Rebellion posters to a number of street boxes (ours and others, some pictured here) decided that their movement is more important than any story that might be on the covers of the publications contained in them.

This week our cover story is that of Joe Buffalo, a man who survived residential school and went on to become a role model for Indigenous youth across Canada. We shot the portrait of him in our studio a couple of months ago, planning to put it on the front page ahead of the 2021 DOXA Festival, so that people would see his face, read the story about the documentary film about his life, then be inclined to watch it during the local film fest. 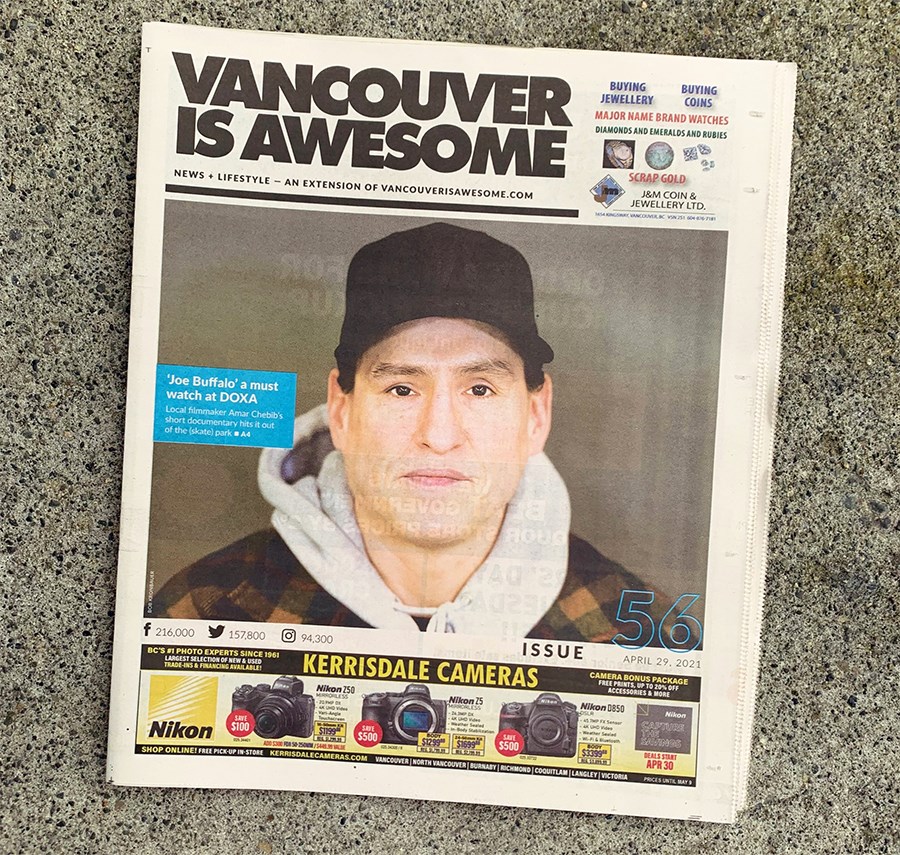 Joe Buffalo on the front page of V.I.A. issue 56. By Bob Kronbauer

Since arranging our sponsorship of and participation in the Walk for Reconciliation in 2017, I've made an effort as V.I.A.'s publisher to make sure we continue to raise awareness around the harms of Canada's Indian Residential School system, and contribute to reconciliation efforts. Joe's story is one of the more powerful ones we've been able to publish on this subject.

Instead of seeing Joe's kind face staring out from behind the glass, some people walking by our boxes saw a message saying their kids are going to die because of the climate crisis, and to bring a tent to participate in a protest.

To be fair, our weekly community newspaper gets printed in an edition of roughly 112,000 copies. The majority of them get hand-delivered directly to homes (for free), and we put aside a few thousand to put into 63 street boxes around the city, where people can grab them for free. Our helping to get Joe's story out there was derailed at a few of our boxes, putting a small dent in it.

But it's the principal here.

So I reached out to the XR folks letting them know I was going to write a column about this, and they offered up the person who headed up the postering effort; a man named Dónal, no last name given. I was told they do this because some in the group "don't always want to identify themselves as organizers due to police surveillance."

Dónal told me that they used wheat paste to apply the posters, which were printed on FSC certified paper, and that we would be able to remove them "with warm water and dish soap."

Unfortunately for Dónal and the other members of this climate action group, our contractors do not clean our boxes piecemeal, and they don't have time to follow up with every bonehead who might stick something onto one and ask for their advice on how they might best remove it.

Our contractors go out and remove things from our boxes using four different types of industrial solvents and chemicals, as is the industry standard. For jobs like this one where there's a lot to remove, they would have to apply quite a bit of those to each box, were the posters on the front, sides, or top (or all three, like some of our boxes were found this week).

I'll admit the stuff is probably not great for the environment, and I would hope that someone who is adhering things onto private property would consider the fact that the company which owns that property might not have the budget to research the best way to remove each individual item, then send David Suzuki out with a bucket of warm water or whatever method the vandals feel would best suit their personal agenda.

Dónal offered a sort-of-half-apology, saying that "some posters go up in places where they are not supposed to," and went on to say that "I'm aware someone will have to take them down but it's a small inconvenience compared to what the global south, the natural world and future generations will have to deal with if we don't halt emissions and ecological breakdown immediately."

He then assured me that he will "ask others who are postering with me to not cover the glass on the front of your boxes in the future so that the important stories you have on your cover don't get missed."

I have to thank him for that, on behalf of the future subjects—including Extinction Rebellion Vancouver—whose stories we will continue to tell, however none more important than the next.