The city’s sweet new skate park in Queen's Park had just barely opened when some clown decided to vandalize it with a spray can.
Chris Campbell May 8, 2019 7:04 AM

When you go to a skate park, chances are you’ll see some graffiti.

Check out the facility under the viaducts in Vancouver and you’ll see loads of it. But that’s not necessarily a bad thing. Skate culture and graffiti seem to go together, which is why some cities don’t bother removing the tagging unless it’s racist or homophobic. 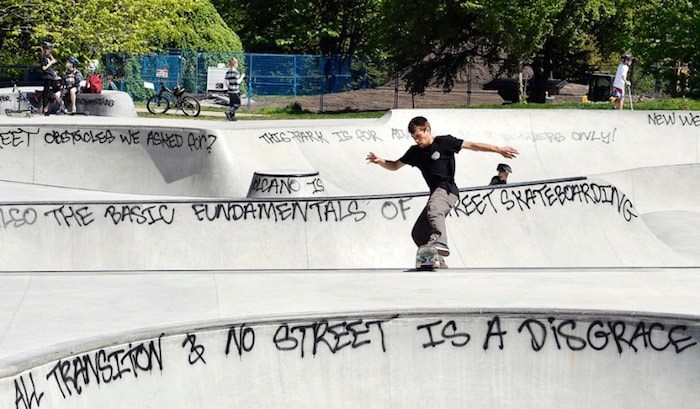 Graffiti critiques have been sprayed all over the new skate park in Queen’s Park. Photo by Jennifer Gauthier.

New West, however, is faced with a different challenge.

The city’s sweet new skate park in Queen's Park had just barely opened when some clown decided to vandalize it with a spray can. And I seriously doubt the city will want the graffiti to stay.

That’s because the words are one long critique of the news skate park. The basic theme is that the facility doesn’t have enough – or any – “street” skateboarding challenges built into it. These include stairs and railings from what I read.

The graffiti says the park is all “transition” – which means its focus is on aerial tricks.

I looked all this up because I’m old and out of touch, but I don’t actually care about this person’s complaint.

The minute you deface something to get your point across, I tune out. The planning for the skate park took place well in advance and the person should have shown up and given their input then.

If they did and it was ignored, then it was likely for a good reason. The “street” stuff that I saw online looks pretty dangerous compared to what New West’s park has. (If you’ve ever seen videos of street-style skaters doing face-plants off of a railing then you’ll likely be happy that stuff hasn’t been included in New West’s park.)

Look, it’s a free park. Skaters and people on bikes seem to be enjoying it. Sure, it might not have everything a skater could want, but taking this step is ignorant and I hope they catch the little twerp who did it.

The Record has reached out to the city to see what it plans to do about the graffiti. I can’t see them wanting it to remain because it’s pretty critical.

Sigh. This is why we can’t have nice things.

UPDATE: The city has indicated plans to remove the graffiti, and have reported the tagging to the New Westminster Police. You can read more about the city's response on the New West Record.