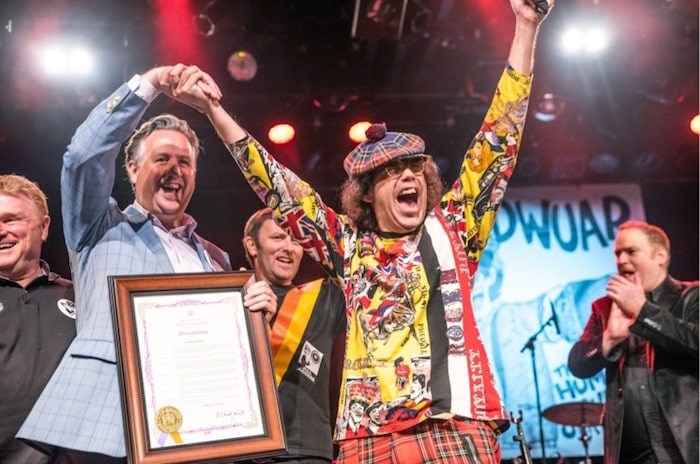 Mayor Kennedy Stewart showed up at the Commodore to proclaim Sept. 29, 2019 as “Nardwuar Day” in Vancouver. Photo Jennifer Van Houten

On Sunday, Sept. 29, close to 700 people showed up to celebrate one of Vancouver’s wildest and weirdest. It was the public induction ceremony into the B.C. Entertainment Hall of Fame for journalist/musician/radio host Nardwuar the Human Serviette, and it happened on a sunny afternoon in the dark and hallowed Commodore Ballroom.

Just outside, between the Commodore and the Orpheum, you’ll find Nardwuar’s newly embedded star in the concrete on Granville Street’s star walk. When I showed up just before the doors of the Commodore opened at noon, the lineup to get in stretched all the way down Granville and around the corner onto Smithe.

Upon entrance, in the first of what would be an afternoon of surreal sights and sounds, attendees were greeted by a glistening ice sculpture of Nardwuar. Seemingly everyone had to stroke it and feel it to confirm it was real. The ice sculpture was a surprise gift to Nardwuar from the staff at the Commodore, who were all adorned in matching Nardwuar T-shirts.

The induction party on Sunday really did have it all, including being a rare Commodore occasion that was both free and all ages. It was amazing to see so many children gleefully turning the Commodore’s famous bouncing dance floor into a giant bouncy castle for one day. 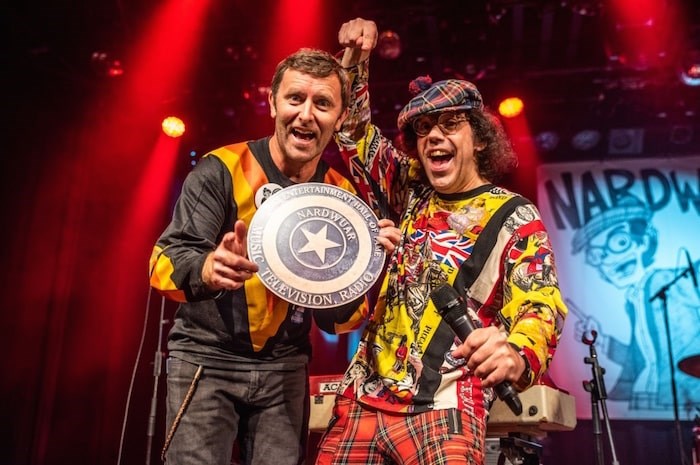 At 1 p.m., and with the crowd at Commodore bubbling with anticipation, MC, author, Courier contributor and raconteur Aaron Chapman took the stage to welcome everyone, followed by president of the BC Entertainment Hall of Fame Rob Haynes, and vice president Howard Blank. Both officially inducted Nardwuar into the hall, which includes Nardwuar’s framed picture on the StarWall in the Orpheum Theatre, his bronze star on Granville Street and a framed induction certificate.

After that, there was another surprise guest. Vancouver Mayor Kennedy Stewart emerged from behind the curtain to officially proclaim Sunday, Sept. 29, 2019 as “Nardwuar Day” in the Vancouver. It must be the only proclamation in Vancouver’s history that cites, in framed and sealed print, Lady Gaga, Iggy Pop and Pierre Elliott Trudeau, all of whom Nardwuar has interviewed, as well as Fugazi, Mudhoney and the Gruesomes, all of whom Nardwuar has put on gigs for. The mayor read the proclamation aloud, and the crowd went wild.

The curtains then opened to reveal Nardwuar with his arms outstretched, grabbing the mic in a ball of extremely grateful energy, thanking pretty much everyone in the room, over and over.

He then rolled into his “Video Vault,” which was a greatest hits of sorts of his 32 years of interviews, including clips from former Prime Minister Jean Chretien, Roots drummer Quest Love and, of course, Snoop Dogg, from arguably Nardwuar’s most famous series of interviews. The Video Vault also doubled as a kind of manic evangelical sermon, Nardwuar preaching to the fully converted that if he can do it, anyone can. He constantly urged younger participants to organize their own all-ages gigs, like he did for the first time in 1987.

The crowd loved it and appreciated the sentiment, though many fully understood that Nardwuar is a true original, a special breed, and there’s no one like him, which is what makes his so special, and such a Vancouver treasure.

And it isn’t a Nardwuar show without more surprise guests. Once the Video Vault (finally) wrapped up, Nardwuar’s band the Evaporators took to the stage to play such original hits as “I Gotta Rash,” “Addicted to Cheese” and “Nard Nest.” Halfway through the sweaty show, Nardwuar welcomed Vancouver broadcasting legend Jim Robson onto the stage.

From 1970 to 1999, Robson was the voice of the Canucks, and called some of the most famous moments in Vancouver hockey history. He was also one of the many media luminaries who signed on to back Nardwuar getting his own star.

At 84 years old, Robson was completely game to take part in the Evaporators garage-punk shenanigans. He even joined the band on vocals for a bizarre cover of the Vancouver Break and Wheel earworm jingle from a TV ad Robson did in 1985. It was hilarious, amazing and, yes, totally surreal.

Robson watched the rest of the Evaporators show from the side stage, sitting beside my three-year-old daughter. Both were mesmerized at the antics transpiring on stage. That there was 81 years between them tells you much of what you need to know about the unique allure of Nardwuar. Later, one parent described the show as “Fred Penner on acid.” 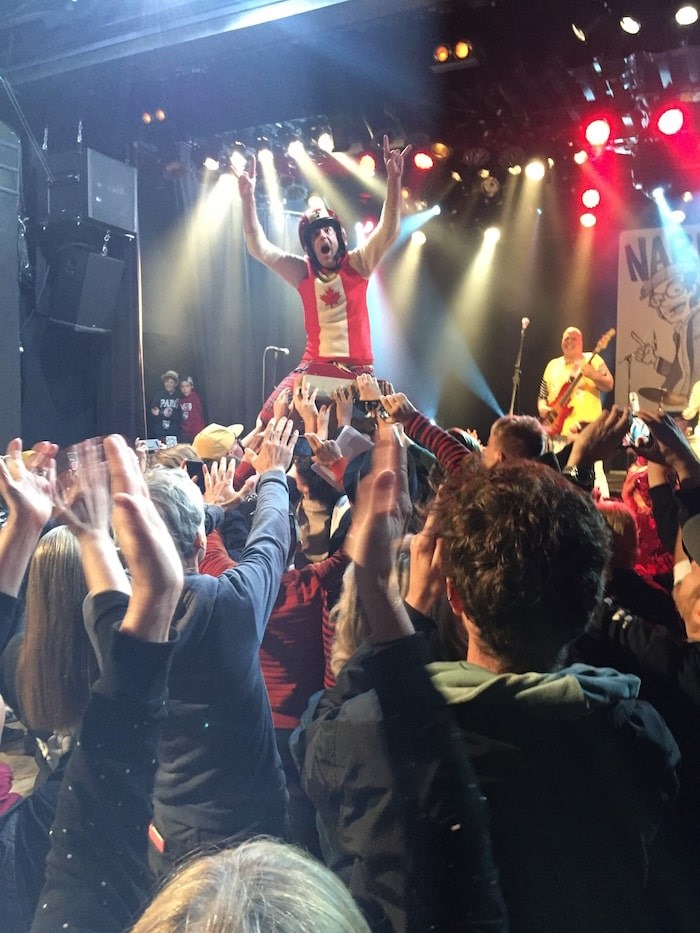 During the Evaporators’ performance Nardwuar crowd-surfed all way down the stairs of the Commodore to Granville Street and back. Photo Shane Gildnes

During the last Evaporators’ song, Nardwuar leapt into the outstretched arms of the audience, which crowd surfed him across the dance floor, all the way down the stairs, past security and out the front doors to his star out on Granville Street, then all the way back upstairs and back onto the stage, as the band — Stephen Hamm from Slow on bass, Nick Thomas from the Smugglers on guitar and Shawn Mrazek from Flash Bastard on drums — played on. And it was all broadcast live on Instagram.

When the Evaporators show concluded, the event was far from over. After quickly getting changed, Nardwuar was rushed to the front of a massive lineup of fans for a “meet and greet” in front of a Nardwuar banner and the framed induction and proclamation documents. It lasted for hours.

My wife and kids and I slipped out of the Commodore much earlier, all of us fully exhausted, sitting down at an outdoor café on Granville Street to recover. Over an hour later, we spotted a young teenage boy walking up Granville with his dad. The kid was grinning from ear to ear, proudly clutching a signed Evaporators’ record and Nardwuar poster. And that’s what it’s all about.

Opinion: The Park Board released this not-cringey video about skateboarding
Oct 14, 2021 12:54 PM