Photo @KaiNagata on Twitter Frances Bula from The Globe and Mail has cracked a Vancouver election nut that others in the media (INCLUDING ME, ALL WEEK) have been working on. 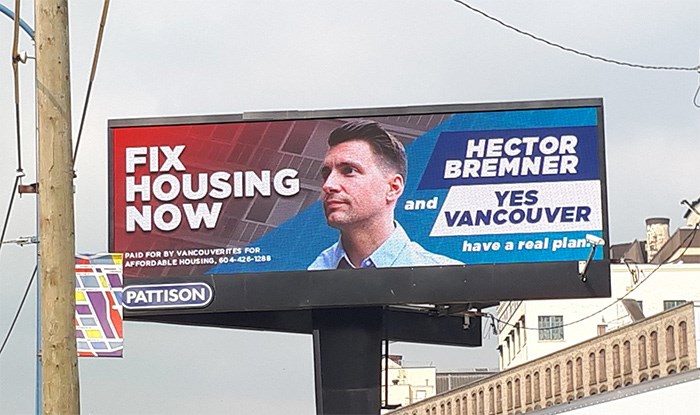 Frances Bula from The Globe and Mail has cracked a Vancouver election nut that others in the media (INCLUDING ME, ALL WEEK) have been working on.

After our mayoral debate on Monday I wrote about how Yes Vancouver's Hector Bremner and his campaign had professed they had no idea who took out the billboards in support of their candidate.

Bremner blamed the NDP (and Vision, and the Greens) for opening the door to the new campaign financing loopholes, then lashed out at a heckler at the debate who challenged him with "Come on!". Bremner noted that "astroturf after astroturf" campaigns have happened, and bemoaned the fact that nobody had brought attention to Tides Canada, who he hinted had funded Gregor Robertson's mayoral campaigns in the past.

You can watch him fumble through the last 18 seconds of his response below, then ask yourself if he may have any inclination as to who funded his billboards which shrewdly worked the new campaign financing laws.

Hector Bremner engages with a heckler and things kindof break down at the end of his answer to the question about the donors behind his mystery billboard campaign, at Glacier Media's mayoral debate. #vanelxn #vanpoli pic.twitter.com/i5tic1aiCT

In her piece, Bula revealed that the billboards were funded by an $85,000 donation from a local real estate developer.

The full story is on the Globe's site HERE, and is only available to subscribers.

It's probably worth the $1.99/week trial, if you're not yet a subscriber and you care about who's putting money into funding candidates in the 2018 Vancouver election.

This is Vancouver’s Stupidest Politics Column, bringing light to issues leading up to the Vancouver election taking place October 20th, 2018. Check out the archive HERE.