OPINION: Mayor Bremner would be fresh start for Vancouver, NPA

This is part of a series of opinions we'll be sharing from Vancouverites of all stripes leading up to the municipal election in October of 2018.
V.I.A. Feb 7, 2018 1:14 PM

This is part of a series of opinions we'll be sharing from Vancouverites of all stripes leading up to the municipal election in October of 2018. Here Adrian Crook of 5 Kids 1 Condo and Abundant Housing Vancouver shares who he thinks our next mayor should be. If you've got an opinion and care to put it out there please submit it to us at contact@vancouverisawesome.com with 'Vanpoli Opinion' as the subject. 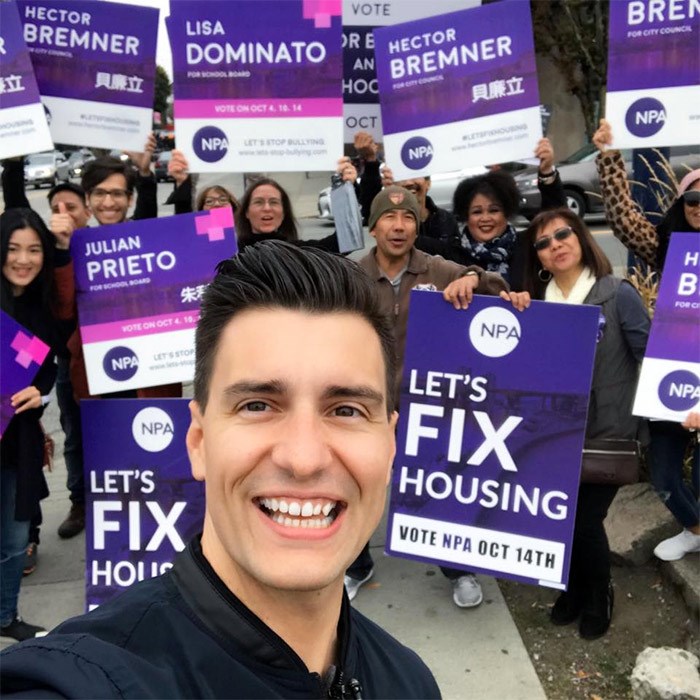 Lately, I've given a lot of thought to who should lead Vancouver after our current Mayor steps down in October.

Vancouver, while still a great city, is an increasingly tough place to live if you're not wealthy, securely housed, or physically and mentally healthy.

Vancouver's had ten years of the same approach to municipal governance. Ultimately, what's been done on housing especially has proven reactionary, slow and incremental.

In last Fall's by-election, housing was the number one issue. And although every council candidate had a proposed fix, virtually all of them demonstrated they didn't understand the scale or origin of the problem.

Only Hector D. Bremner, against what many assumed would be the NPA party line, was courageous enough to champion abolishing exclusionary zoning.

Building apartments and corner stores in single family neighbourhoods, while legal prior to 1940, has effectively been outlawed by zoning since. That's resulted in 76% of our residential land dominated by detached houses - our least affordable housing form.

Vancouver's racist, classist residential zoning has unfortunately never been more effective than it is today. Over 65% of Vancouverites are left to fight for space in the remaining 24% of our land that isn't zoned to exclude the middle class or poor.

Ditching exclusionary zoning city-wide would allow us to foster new areas of diversity, in terms of residents and mixed uses, similar to what we see today in Mount Pleasant, the West End, and Strathcona. Building the right type of "missing middle" housing like low-rise apartments, row houses, co-ops, and the like is how we can restore families, young people and affordability to neighbourhoods in decline.

As a co-founder of Abundant Housing Vancouver, my goal is the removal of exclusionary zoning. Sometimes I'm told it's unrealistic. Other times, like when I've pressed for it in meetings with our current City government, it's been glossed over or shied away from. No politician to date, aside from Hector, has been brave enough to tackle our massive housing problem with a proportional response.

That underwhelming response is why Vancouver's governing party will change this October.

And the hope of returning affordability and diversity - residents from all backgrounds and income levels - to Vancouver's exclusionary neighbourhoods is why I want Hector to lead that party as Mayor.