https://www.facebook.com/swanson4council/ Jean Swanson rolled out the class war wagon this weekend while announcing her intention to run for city council in October, for left-wing mainstay party COPE .
0
Jun 11, 2018 2:15 PM By: Bob Kronbauer 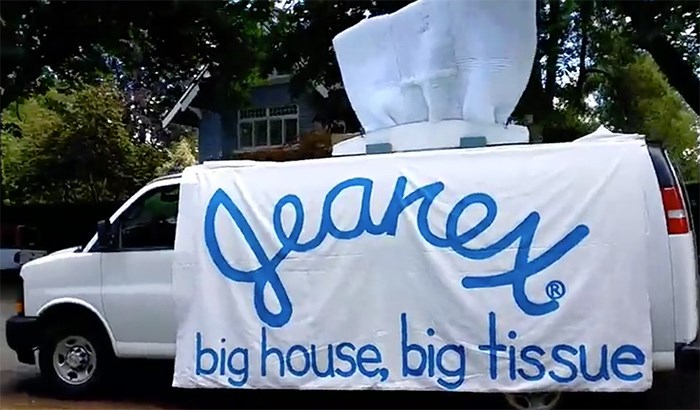 Jean Swanson rolled out the class war wagon this weekend while announcing her intention to run for city council in October, for left-wing mainstay party COPE.

Her campaign did up a cube van made to look like a box of tissues with the fictitious brand name "Jeanex" on the side (a take on Kleenex, get it?), along with the slogan "big house, big tissue". On the other side of the van were the words "the rich people tissue", capitalizing on the anger directed towards homeowners who are decrying the NDP's school tax by offering them a tissue.

Walking the walk, the 75-year-old hopeful showed up at the announcement event in Shaughnessy rocking a backpack and looking like she'd be just as comfortable talking about her platform at a rally as she would taking the bus to a friend's house off the Drive.

Pitting people with money against those with less might not be the most helpful thing to do if we hope to bring together our community while also solving the housing crisis, but hot damn it seems to generate a lot of votes.

Some thought they were hearing a death rattle coming from COPE HQ after the 2014 election as 0 of their 19 candidates made it into office. However the recent byelection saw Swanson getting the second highest number of votes, in part due to her "tax the rich" campaigning that honed in on people's anger about the housing crisis. Hector Bremner of the NPA won a council seat with 13,372 votes in that election; Jean as an independent clocked in at a close 10,263 (FULL RESULTS).

After that campaign Mike Howell of the Vancouver Courier awarded Swanson Best Attention-Grabbing Campaign in his roundup of the best and worst of the 2018 byelection:

Hands down, it was the independent candidate Jean Swanson and her band of young people whose “tax the rich” slogan resonated more with voters — and media — than, say, “we need more inclusionary zoning and a city-wide plan, people!” Yes, maybe some of Swanson’s ideas such as a “rent freeze” weren’t doable at city hall. She knew that but wanted to bring attention to issues of inequality and poverty. Holding a rally outside Lululemon founder Chip Wilson’s $75-million Point Grey home and calling for a “mansion tax” made for good television. Swanson placed second in the council race, with 21 per cent of the vote. Another 3,110 votes and she would be a councillor.

There may be some life left in COPE yet. 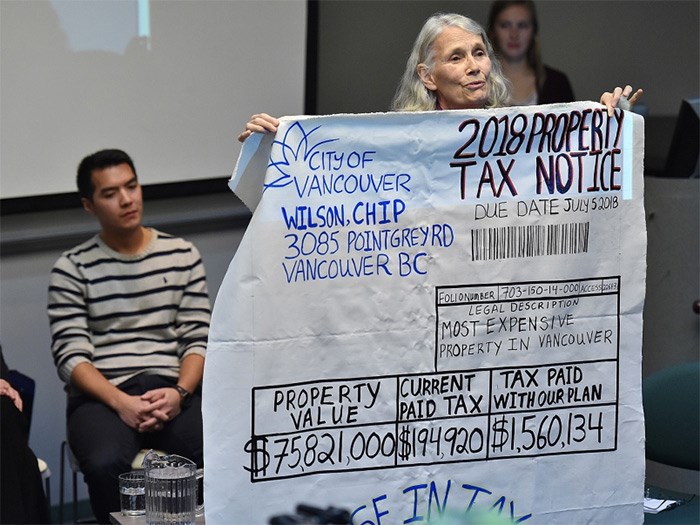 thanks in part to her rally outside Lululemon founder Chip Wilson’s $75-million Point Grey home calling for a “mansion tax.” Photo Dan Toulgoet

This is part of Vancouver's Stupidest Politics Column. Further reading: