Longtime activist and Order of Canada recipient Jean Swanson is in jail following sentencing for her part in a pipeline blockade
0
Aug 15, 2018 12:48 PM By: Bob Kronbauer 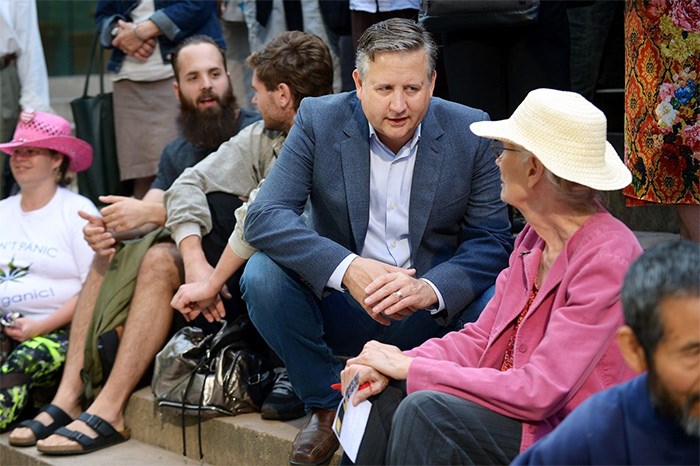 Jean Swanson talks to Kennedy Stewart outside B.C. Supreme Court Aug. 15 before being sentenced to seven days in jail after being arrested during a blockade at a Kinder Morgan facility in Burnaby. Photo Jennifer Gauthier

Vancouver city council candidate Jean Swanson was sentenced to seven days in custody today after being arrested earlier this summer for her part in a blockade at the Kinder Morgan facility in Burnaby. She was taken to jail immediately following today's hearing.

The longtime activist and Order of Canada recipient kicked off her election campaign in June by vilifying "rich people" and her sentencing will certainly make her a martyr to those most opposed to the pipeline and people who dislike rich folks. If you were drawing a venn diagram of those two there would be considerable overlap.

“The Order of Canada is given to people who want a better country,” said Swanson following the blockade. She received her Order for working with impoverished communities in Vancouver’s Downtown Eastside and is playing that up throughout her protest and election run (which, again, have serious overlap), “Spending billions of taxpayer dollars on an oil pipeline given the threat of climate change is not making Canada a better country.”

Even if you're in favour of the pipeline and you think rich people are okay, you've got to hand it to Swanson for playing cards that will surely appeal to COPE voters. There just may be some life left in that party yet.

With background files from Jessica Kerr and Chris Campbell

This is Vancouver’s Stupidest Politics Column, informing voters leading up to the Vancouver election on October 20th, 2018. Check out the entire archive HERE.