OPINION: Vancouver's partisan NDP Mayor is using City resources to tell you who not to vote for 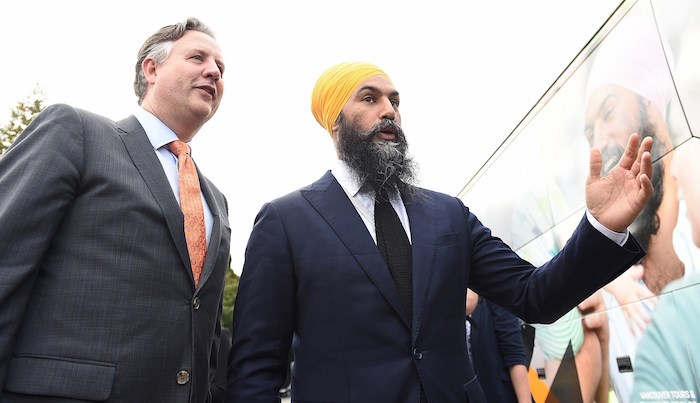 Over the past few months, as the federal election has been heating up, Vancouver's Mayor Kennedy Stewart has done his best to distance himself from his very recent past in federal politics.

In his monthly media availability at City Hall I've heard it asked of him multiple times if he's endorsing a candidate or a party.

His answer has always been that he's "meeting with all of the leaders" and that he's going to let the electorate decide who's best to lead.

"I've already got my hotel room booked for October 21st" is something he has said more than once, alluding to the fact that he hopes to get meetings with the newly-elected PM the moment they get voted in, so he can advocate for our city.

Every time I hear him say he's not siding with any particular party or candidate I have to wonder if he thinks any of the reporters in the room actually believe what he's saying.

Because it's a lie.

It's total bullshit, for a few reasons:

1. Stewart was out campaigning with NDP leader Jagmeet Singh only a few months ago. Your Mayor literally went door to door with Jagmeet, encouraging residents to vote for Singh and the NDP in the by-election, so he could pick up a seat and take a run at being Prime Minister.

Endorsement? What endorsement? Can a man not wander the streets with a pal handing out flyers without getting pegged as a partisan politician? You people are so cynical!

2. The safe riding that Jagmeet helicoptered into to become the NDP MP for was the very same riding that Stewart was recently an NDP MP for, before he "bailed" on it to become Mayor of our city. Stewart endorsed Jagmeet for the leadership back in 2017 when he was an MP.

It was a literal endorsement. If it wasn't then I'm not Vancouver's Stupidest Politics writer.

3. The Mayor's staggering statement from today, issued on City of Vancouver letterhead and sent out by communications staff whose salaries you pay, is a wild ride.

Its title is "Andrew Sheer would be worse than Stephen Harper", and it is so blindingly partisan that it hurt my eyes to look at it.

In it your Mayor makes points about how, if elected, Scheer would "make housing less affordable for Vancouver", he would "kill [the] SkyTrain to UBC", and "halt our progress on the overdose crisis".

Regardless of whether or not you believe all of those things to be true, the fact that he issued the letter using City staff, and that he ends it by saying "I want to be clear, [I'm] not telling people who to vote for" is the hugest pile of B.S. this Mayor has delivered during his time in office.

Oh, and since this is the Stupidest Column in town I should probably point out that they spelled Scheer's name wrong in the statement.

Your tax dollars at work, folks.

The Mayor's office spelled @AndrewScheer's name wrong multiple times in @kennedystewart's statement about how terrible he thinks he would be for Canada.#elxn43 #cdnpoli pic.twitter.com/bXtaWglqit