Will this photo come back to haunt Vancouver Mayor Kennedy Stewart or are we just insensitive turds?

It’s got to hurt your brand when your former campaign office perfectly illustrates the problem that you’ve made your raison d'être.
0
Apr 10, 2019 3:56 PM By: Vancouver Courier

If you haven’t guessed by now, the bon vivants at K&K are fans of irony, whether it’s rain on our wedding day, a fly in our chardonnay or winning a free pair of slacks on International Pants Free Day. (We may have misheard some of those lyrics.) 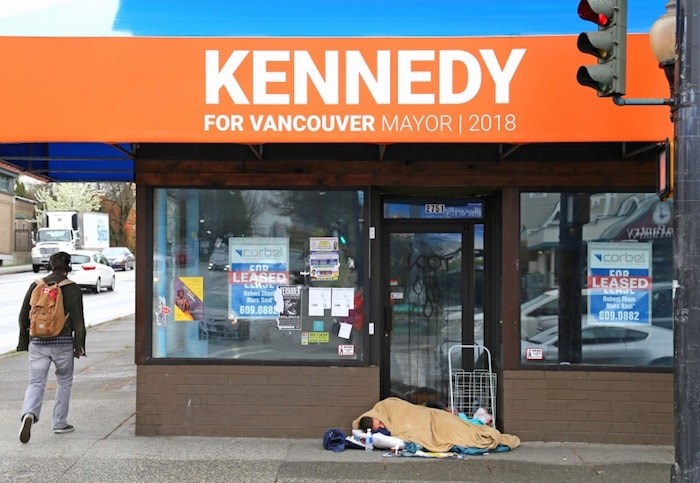 So when our colleague Bob Kronbauer at Vancouver Is Awesome snapped this photo of Mayor Kennedy Stewart’s former campaign office at Main and 12th, it stirred something deep inside of us like a dog rubbing its genitalia on the carpet.

Of course, the plight of this city’s homeless is no laughing matter, and a photo of someone camped out in the doorway of an abandoned storefront is a sad indictment of government inaction on all levels.

And yet, for someone who successfully campaigned on housing as his number one issue, and who continues to make strides in increasing the number of new housing units in the city, it’s got to hurt your brand when your former campaign office perfectly illustrates the problem that you’ve made your raison d'être.

It would be like former Mayor Gregor Robertson, amidst the city’s housing crisis, homeless crisis and opioid crisis, doing guest DJ sets at a local night clubs…. Hey, wait a second.

Of course, fretting over optics is a tad shallow compared to the dire situation many in Vancouver find themselves. But knowing a thing or two about the mindset of those in the media, we can tell you this is the exact kind of photo reporters and editors drool over. It’s the kind of photo they will trot out anytime there’s a story about homelessness in Vancouver or the mayor’s efforts (failed or otherwise) to curb homelessness. And no amount of chardonnay will dull that sting.

On the other hand, maybe take down your campaign office signs instead of leaving them up for six months after the fact. It’s what’s expected when you advertise a garage sale. Just a thought.