108 Steps, a.k.a. the ladder to nowhere is a hulking 120-foot metal structure, painted grey and permanently installed in a central boulevard along busy Kingsway at Gladstone Street.
0
Jan 17, 2019 2:55 PM By: Vancouver Courier

Public art in Vancouver is a subject that always evokes strong feelings in many, and I am no different. It can be said that some of the works we see here are captivating, while some can be classified as dreck. 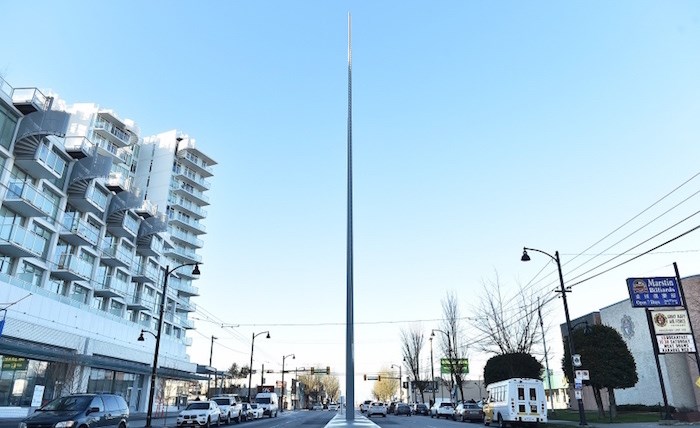 Public art piece 108 Steps was made possible through a $671,000 contribution by Westbank, the luxury condo developer best known locally for building the Fairmont Pacific Rim and the Woodward’s building. Photo Dan Toulgoet

As provocative as some pieces are to me or you, I would never argue that we should pull back on finding ways to support the arts in our city. On the contrary, we must do more collectively to support our community of artists.

While Vancouver has a few noteworthy examples of where art animates our surroundings — the murals overtaking bland edifices in Mount Pleasant, for example — I struggle to think of which pieces the city really embraces as its own.

What lately inspired me to put pen to paper on this topic is a piece called 108 Steps, a.k.a. the ladder to nowhere. It is a hulking 120-foot metal structure, painted grey and permanently installed in a central boulevard along busy Kingsway at Gladstone Street.

The ladder — which to me has all the charm of the underside of a railway trestle — was made possible through a $671,000 contribution by Westbank, the luxury condo developer best known locally for building the Fairmont Pacific Rim and the Woodward’s building. The developer showcases 108 Steps with pride on their website.

The Norquay neighbourhood where the 40-metre high protuberance makes its home could desperately use enhancements to the public realm. Before Westbank’s Kensington Gardens development came to this strip, the area was mostly known for an oversized dollar store, the nearby cold beer establishment, a KFC restaurant and the largest golden arches sign in East Vancouver.

Setting aside the real public safety risk the ladder poses should someone try to scale it someday, I wonder if anyone considered the symbolism of situating this costly piece in the heart of one of the city’s lowest income neighbourhoods.

Perhaps the neighbourhood gets the last laugh though, because when I look at it on my eastbound commute I can’t help thinking the ladder could be viewed as a one-finger salute to city hall.

The fact that so many of Vancouver’s public art installations are concentrated around the downtown core is something that should be rectified going forward. The city has many high streets on the South and East Side that could be enlivened by memorable public art.

One Vancouver artist who I have long admired is Jeff Wall. I was struck by the fact one of his colourful Cibachrome images had been staged on a nondescript block near Rupert Street.

Rarely have I seen a piece been so embraced by our city as Ken Lum’s East Van cross sign (“The Monument for East Vancouver,” which references an old gang insignia) installed beside Clark Drive. I recall rushing out to see it installed nine years ago this week, just prior to the beginning of the 2010 Winter Olympic and Paralympic Games.

The sign today is starting to look neglected. The property abutting it is overgrown with cottonwood trees that threaten to obscure part of the sign. I have yet to confirm if a building is being planned for that property in front of it.

Due to its frustrating placement facing the industrial land to the west, opportunities to photograph and even posing in front of the cross are limited. If someone thought to erect a viewing stand there, the lonely VCC-Clark Skytrain station might become a Mecca for Instagram users.

I also would like to see some more audacious pieces here — such as the Miss Mao sculpture by the Gao Brothers (installed in Richmond during the 2010 Games), and Device to Root Out Evil (the infamous “upside-down church” the park board sold to the City of Calgary in 2008). The best art pieces are sometimes the most subversive.

With matching funding from philanthropists, it would be exciting to have our city reignite the zeal for public art we saw back during the Olympics throughout our city and in surrounding municipalities.

While it is hard to quantify the value, we know that public art done well defines urban spaces, drives economic benefits and evokes local pride. Simply put, Vancouver cannot be complacent about its public art.