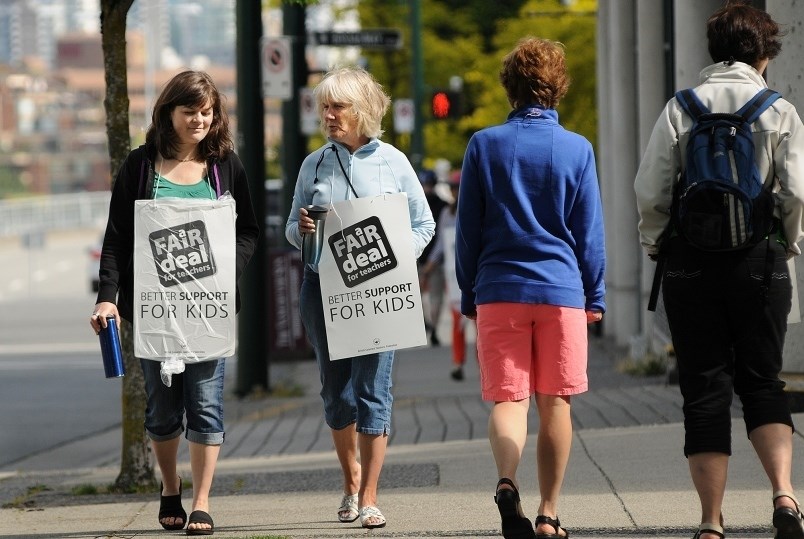 In 2014, B.C. teachers were on strike for five weeks, over a period that stretched through the summer. That strike came after 16 months of failed bargaining and included a partial lockout and a 10-per-cent wage reduction. File photo Dan Toulgoet

Teachers and their employer have been bargaining for a year and have been in mediation for months. Mediator David Schaub released a report in November, after 58 days of bargaining and 16 days of mediation, which said only three issues had been resolved.

The leaked plan calls for a four-stage job action, Baldrey reported. The first stage would see teachers continue to put pressure on the government through communications. The second stage would see a withdrawal of extracurricular activities, like attending parent-teacher meetings, coaching sports teams or preparing anecdotal report cards. The third stage would see 20 per cent of teachers strike on a rotating, school-by-school basis. The fourth stage would see a province-wide strike.

In 2014, B.C. teachers were on strike for five weeks, over a period that stretched through the summer. That strike came after 16 months of failed bargaining and included a partial lockout and a 10-per-cent wage reduction. In the ramp-up period there were a couple of weeks of rotating strikes where several districts at a time would be closed for one day per week. As the strike wore on, the government paid parents $40 a day to cover the cost of childcare for kids under the age of 12.

Eventually, with the help of a mediator, a negotiated six-year deal was reached, bringing labour peace. The BCTF put a response to the leaked memo on Twitter, saying they remain fully committed to the mediation process, which is still in place.

Important piece of information for those in #bcpoli and #bced speculating about contract talks. The BCTF remains fully committed to the Labour Relations Board mediation process. There can be no strike vote, job action, or lockout by the employer while that process continues.

“There can be no strike vote, job action, or lockout by the employer while that process continues,” the BCTF said on twitter. “It has been a year of bargaining and of course we are talking to members about contingency plans IF mediation concludes without a good deal.

“We hope the employer will agree to meeting dates soon. The mediator is still engaged. We don’t expect any imminent changes.”

The plan would go first to the BCTF Representative Assembly, which is meeting Jan. 31 and Feb. 1. The Representative Assembly is a group of teacher leaders who meet three times each year and make policy decisions for the BCTF. That group could decide to approve the plan in principle, or toss it out and come up with another plan.

The BCTF has a meeting with the mediator planned for next week and setting dates to continue mediation will be part of that, BCTF said. In November, teachers rejected the mediator’s recommendation of a two-per-cent wage increase in each of the next three years with a rollover of the rest of the contract, including class size, class composition and specialist teacher ratios, where they exist. Those rules were restored in 2016 by the Supreme Court of Canada, but they are not universal across B.C.

Earlier last year, the two sides were far apart on negotiating those rules, with teachers wanting the entire province to level up and the employer wanting districts with strong language to concede so that others could gain. In November, Mooring said teachers rejected the offer because of low starting salaries, low wages overall and a provincial teacher shortage. She said teachers were willing to accept three years of two-per-cent increases, but only with some modifications to salary grids, which she said do not trigger “me too” clauses for other unions.

At that time, Mooring urged the province to offer new funding, but Finance Minister Carole James told the Globe and Mailthis week that this year’s provincial budget won’t offer any new money.

The province will spend $6.6 billion on education this year, including about $400 million to pay for nearly 4,000 new teachers who were hired as a result of the Supreme Court ruling.

In his November report, the mediator said there was a “disconnect” preventing a collective agreement.

A failure to do so would be a missed opportunity to address the issues such as class size, class composition, teacher salary grids and attraction and retention or teachers.”

Let’s hope both sides are ready to find a way forward now, so students and their parents can relax and focus on learning.