By now you might have seen the video. If lucky, you haven’t.

It’s the aftermath of a minor collision involving a bike and a car at the intersection of Cook and Yates in Victoria, B.C. on Saturday afternoon. It looks as though the car might have knocked over the bike in a crosswalk.

Witnesses say the man on the bike then pulled open the car door and berated the elderly driver before she locked herself inside. 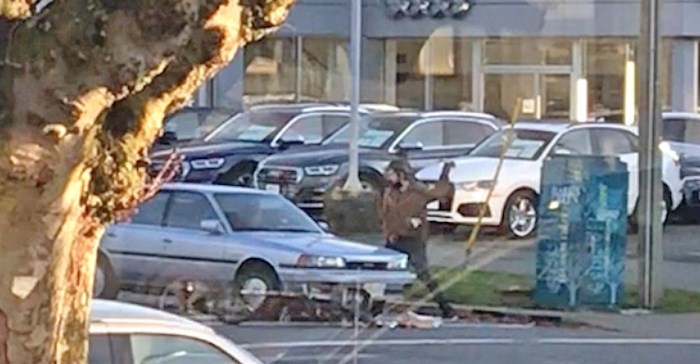 Fortunately, the bystander video now flying around the Internet does not show what came next: the man dropping his drawers and defecating, right there in the street. Unfortunately, the video does show the cyclist then scooping up his own waste and throwing it into the windshield of the car.

He then uses the bike to smash the car’s front end before jumping back on and riding away.

Now, gosh, I might be going out on a limb here, but I say that sort of behaviour is just wrong.

Or, as Const. Matt Rutherford, the Victoria Police spokesman, put it in a tweet: “The things I never thought I’d have to say in an interview: ‘Completely unacceptable to defecate and throw it at a car.’ ”

Ah, but give interviews he was forced to do, as the incident was bizarre enough — having both a yuk factor and a yuck factor — to catch media interest that spread across the country. Tourism Victoria must be thrilled.

As you might expect, the video drew quite a reaction online. Many posters expressed admiration for the bike rider’s ability to perform on command, as it were. “This guy is playing chess and we’re all playing checkers,” marvelled one comment on Reddit.com.

As with any story involving even a tangential reference to cycling downtown, others seized on the opportunity to launch into a purple-faced rant about entitled cyclists, Lisa Helps and her damned bike lanes, the Commies running city hall, the cost of the Johnson Street Bridge and while we’re at it let’s dig up Pierre Trudeau just to have the satisfaction of burying him again.

Other cyclists hastily distanced themselves from the Mad Crapper of Yates Street, pointing out that he was riding what appeared to be a homemade electric bike, one that seemed to have a throttle — practically a motorcycle. (Cyclists could also argue that when a woman performed the same sort of protest at a Tim Hortons in Langley in May, flinging her own feces at counter staff, nobody blamed the unchecked entitlement of coffee drinkers.)

It doesn’t matter who was at fault, who had the right of way, or what it was that set this guy off. His actions were disturbing and disgusting. No one in his right mind would act the way the bike rider did.

Alas, it doesn’t take much effort to stumble across anti-social behaviour. We have become practised at stepping over or around dysfunction as though it’s not there, or is just a normal, acceptable, regrettable but easily shrugged off part of life. When it gets too crazy, we leave it to the police to wade in as 24-7 sheriffs/social workers/addiction counsellors/mental health workers/bouncers. (“Every cop in this building does this every shift,” Rutherford says.) Not that that solves anything long-term. Nor does it help when, instead of being concerned about an angry man losing it on an elderly woman, Internet viewers treat it as entertainment.

As of Tuesday, police were still looking for the man on the bike. If caught, he might face mischief charges. Rutherford praised the bystanders who provided police with photos and ensured the safety of the woman at the wheel. “A lot of people stuck around and helped the driver, which is appreciated.”