Photo Shutterstock Since the move toward legalization of recreational marijuana began after the last federal election, a lot of discussion has taken place surrounding marijuana-impaired driving.
Jun 19, 2018 8:09 PM By: Kyla Lee 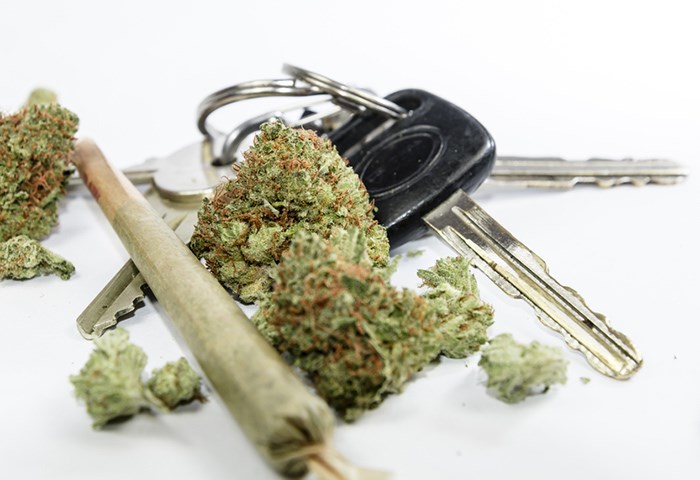 Since the move toward legalization of recreational marijuana began after the last federal election, a lot of discussion has taken place surrounding marijuana-impaired driving. What has never been clear throughout all this discussion is what the existing state of the law is when it comes to cannabis impairment and driving. This has not been assisted by the introduction of Bill C-46, which creates separate offences involving marijuana and driving.

This post breaks down marijuana impaired driving as it currently stands in British Columbia and under federal criminal law.

Bill 17, the Motor Vehicle Amendment Act, quickly passed third reading and was given royal assent as of May 17, 2018. As of yet, the provincial government has not enacted those provisions.

I discuss them in detail in an earlier post, so I won’t spend time going over them here. Suffice to say, it is unlikely that we will see any of these provisions enacted by the province until after Bill C-46 passes and is enacted federally. This is because much of what is set out in the changes to British Columbia’s impaired driving laws is based on certain federal legislative provisions that do not yet exist.

That being said, there is authority to suggest that British Columbia could enact its own legislation creating a demand for saliva samples. But that would require drafting, debating, passing, and approving all the necessary devices. In mid-June, the government is more likely to let things unfold in their own time.

Currently under the British Columbia Motor Vehicle Act, drivers who are affected by drugs in their ability to drive are given only one type of prohibition. This is a 24-Hour Driving Prohibition for drugs.

A 24-Hour Prohibition for drugs can be given to anyone who a peace officer has reasonable grounds to believe is affected by drugs in their ability to operate a motor vehicle. The prohibition must be given on a highway or industrial road, meaning that if the police serve it back at the police detachment it is invalid. The prohibitions carry with them two Remedial Program Points, which means that as they accumulate they can trigger mandatory referrals to the Responsible Driver Program and Ignition Interlock program.

There is nothing else. There is no statutory authority, presently, to issue a 90-day prohibition or a prohibition of any length longer than 24 hours for drug-impaired driving. Expect this to change quickly.

I predict that the Superintendent of Motor Vehicles may use its discretionary powers under Section 93 of the Act to impose longer sanctions following 24-Hour prohibitions for drugs. The Superintendent is already doing this in the case of Class 7N drivers, and it stands to reason that their policy will be updated to reflect the so-called risks of legalization.

Police are not precluded from using a Standardized Field Sobriety Test in assessing a driver for drug impairment and subsequently issuing a 24 Hour Prohibition. Frankly, I think this is illegal, but the BC Court of Appeal disagreed. So there you have it.

The only way to dispute a 24-Hour Prohibition for drugs is by filing a judicial review in BC Supreme Court. This can be a costly and time consuming process, and is incredibly cumbersome. While the judicial review is pending, the prohibition remains on the driving record. The Superintendent of Motor Vehicles does not hold in abeyance any other consequences pending the outcome of the review, despite the fact that they have the discretionary authority to do so.

Federally, there is only one offence pertaining to drug-impaired driving. Section 253 of the Criminal Code prohibits operating or having care or control of a motor vehicle while the ability to do so is impaired by alcohol or a drug.

In order to prove impairment, officers may take a number of steps.

The SFST consists of three tests: the horizontal gaze nystagmus, walk-and-turn, and one-leg stand. Despite the fact that these are used across the board for any suspected drug impairment, horizontal gaze nystagmus is not expected to be present in drivers with marijuana in their system. So the test is relatively ineffective in cases of cannabis impaired driving.

SFST results are only admissible in court as the basis for the officer’s belief that the driver was impaired by drugs, and for the officer’s later demand for blood samples or a Drug Recognition Evaluation (DRE) test.

SFST results are not admissible in a criminal trial as proof of impairment.

Once an officer has reasonable grounds to believe a person is impaired by a drug, they may demand a Drug Recognition Evaluation. This evaluation, known as DRE for short, is a twelve-step evaluation that involves a serious of physical tests, interviews, examinations of the pupils, skin, oral and nasal cavities, heart rate, temperature, and blood pressure. Police are trained that it is some sort of a quasi-medical examination that will determine whether the impairment is caused by a drug or a medical condition.

In reality, the tests are deeply flawed. But that’s a blog post for another day.

Upon completion of the test, an officer can then demand a sample of blood or urine from an individual which will be sent to the RCMP Forensic Laboratory for testing. The results of that sample will be used as evidence at trial. The current turnaround time for lab requests is on average four months. So most people are released on paperwork to attend court in the distant future after providing a sample.

But the DRE is admissible on its own, without a blood test, as proof of impairment. This is thanks to a recent decision by the Supreme Court of Canada that confirmed that officers trained in the DRE are automatically experts, without a hearing. That was a huge setback for defences in these cases, and now defence lawyers must be able to attack the performance of the test and the knowledge of the officer to show that the results are unreliable.

However, it is my experience that the majority of cases involving drug impaired driving are not prosecuted unless there is a blood or urine sample confirming the presence of the substance the officer thought was impairing the driver. Certainly if another drug is detected, that would tend to undermine the evidence.

All of that is important information to know about the procedural steps, but it may also be unnecessary in a criminal prosecution for impaired driving by a drug. The prosecution does not have to have a drug test, or a physical evaluation, or anything else to prove impairment. The Supreme Court of Canada has confirmed that any degree of impairment, even slight, is sufficient to found a conviction for impaired driving.

The law, therefore, only requires proof of impairment. It does not require the prosecution to prove specifically which drug was the cause of the impairment. Impairment is defined as “alcohol or a drug” or both meaning that such nuanced evidence is not necessary. Bad driving, an admission to recent use of drugs, and physical coordination problems could be more than enough to call for a conviction in a criminal case.

Remember that it is a criminal offence to refuse to comply with an SFST or a DRE demand. The consequences on conviction for refusal are the same as conviction for impaired driving: one-year minimum driving prohibition, $1000 fine, and criminal record for first offenders. Subsequent offences carry mandatory jail terms.

The coming weeks and months will present some interesting challenges and a new legal horizon in Canada. I for one will be excitedly watching it all unfold.