That Marrisa Shen protest was really just about bashing immigrants

The man accused of murdering Burnaby teen Marrisa Shen in 2017 was in court Tuesday for an uneventful appearance.
0
Jan 30, 2019 4:14 PM By: Chris Campbell

The man accused of murdering Burnaby teen Marrisa Shen in 2017 was in court Tuesday for an uneventful appearance.

How it works is an accused appears in court over and over again as new appearance dates are set and lawyers exchange documents as they prepare their cases. It’s an exhausting process. 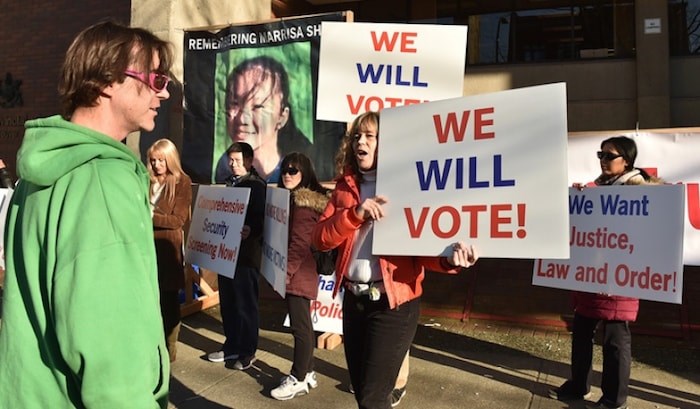 Kat Broek (orange jacket) speaks to a passerby (green) at a protest held Tuesday by the Cultural Action Party outside the Vancouver Provincial Court House where Ibrahim Ali, a Syrian refugee who is charged with the Murder of Marrisa Shen. Photo Dan Toulgoet

This was more of the same.

What wasn’t uneventful was what was happening outside. A group of people staged a protest at the courthouse in Vancouver. This group included known anti-SOGI activist Laura-Lynn Tyler Thompson, now running in Burnaby South for the People's Party of Canada. The PPC's one big issues seems to be immigration.

The accused, Ibrahim Ali, is a Syrian immigrant who came to Canada with his family.

According to emails to the media from the protesters, poor immigration security checks are somehow to blame for what happened to Shen.

But remember this, this man is only accused and hasn’t even faced trial. Also, these protesters have not supplied one shred of evidence to back up their claims that Canada’s immigration system missed something in the accused’s background that should have disqualified him from refugee status.

Not having any evidence is not surprising considering the protest is organized by something called the Cultural Action Party.

I checked out its website and it’s as anti-immigration as it gets.

Nevermind that Canada’s “heritage” basically consists of immigration. Outside of indigenous peoples, we all come from immigrants at one point or another. My family were immigrants from Norway and Scotland. I’m proud that my country is open to immigrants from all backgrounds. I feel like this makes our national stronger.

It’s just that this group doesn’t seem to like immigrants who are people of colour and who don’t speak English as a first language.

Now, they are trying to exploit the tragedy of a little girl’s death to stoke fear about refugees – all without any evidence that our nation’s security checks are flawed.