Our Editor-in-Chief explains why we decided to publish a story about the killer of a teenager in Burnaby, telling the story of how the refugee came to be in Canada
0
Sep 13, 2018 1:48 PM By: Bob Kronbauer 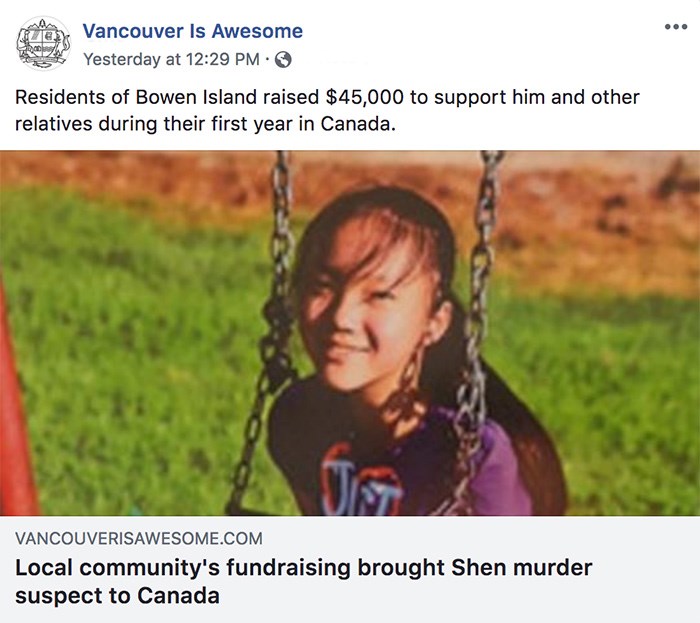 Our followup story as it appeared on Facebook. Screengrab

Yesterday we published a followup story to the news that an arrest had been made in the Marrisa Shen murder case. Based on some of the feedback we've received about how readers are interpreting it, we owe you an explanation as to our intentions in running it.

A bit of background: Ibrahim Ali, 28, was arrested last Friday, charged with first-degree murder in the death of the Burnaby teen, whose body was found in Central Park on July 19, 2017. In the IHIT press conference they noted that he was a Syrian refugee, new to Canada.

Our story yesterday was originally published in one of our Glacier Media sister publications, the Burnaby NOW. In it, reporter Cornelia Naylor presents the facts of how the suspect got to Canada.

She interviewed the pastor of a church that helped sponsor Ali, starting off by quoting him saying it was “absolutely devastating”. Which it was and is.

He goes on to say “In terms of the (refugee) work that we do, I mean, the vetting situation is very good,” he said, “and they’re people who are in crisis, and of course our work is to respond to those who are suffering and in crisis as best we can with whatever resources we have available. Always a situation like this gives one pause to review, and we’ll review, but it’s really out of an act of compassion and care that there is the response to the refugee situation, which is not going to stop, right?”

The article then explains how he and his family were sponsored by families on Bowen Island. Our intention in publishing it was to advance the story and give people a better understanding of the person who committed this crime.

We were not taking the position that these people were in the wrong for fundraising for refugee families in need. In fact it's wonderful that they did, and more people should take it upon themselves to do just that. The story was simply meant to present the facts of the situation as our reporters know them.

To give you an idea of our overall coverage on Syrian refugees, the previous day we ran an editorial position stating that the "Murder charge against one Syrian refugee is not a licence to bash them all".

This is our firm belief.

We have been reporting on Syrian refugees since 2015, starting with this list of ways you could help them when a rush of these good people started arriving in 2015.

Last weekend we published a piece encouraging our readers to help a family of 7 Syrian refugees who had become homeless.

Their community has organized and participated in numerous dinners which we've covered.

Our society is better for these new citizens that we've welcomed here, and will continue to welcome. The actions of one man should not paint them all in a negative light.

RCMP Supt. Donna Richardson stated that "by and large, our refugees that come to the country are hard-working citizens that are happy to be in Canada, and I would just hope that we look at this incident for what it is: It’s a one-off situation."

Since we cover local news (along with all of the Awesome stuff you've come to expect from us), we will continue to publish stories about the Shen trial, illuminating the uncomfortable facts that may emerge in it.

We will not be holding back on publishing facts in our coverage simply because they may be used by filthy racists to further their causes.

Thank you for continuing to come to us for your not-always-great news and stories of people doing awesome things in and for the community.