If the Vancouver election was tomorrow, 1.1% of voters say they'd vote for this baby

Main Street Research released some polling results this week which exposed the local polling industry to critique. It's something they've suffered since Adrian Dix lost the election they'd essentially promised him despite not kicking any dogs, and they've been working on shedding it.

Main Street's automated poll of 862 people in Vancouver, on landlines and cell phones, painted a fairly vague picture of voter intentions. It highlighted that a whole 41.8% of voters are as yet undecided who they're casting a ballot for on October 20th. 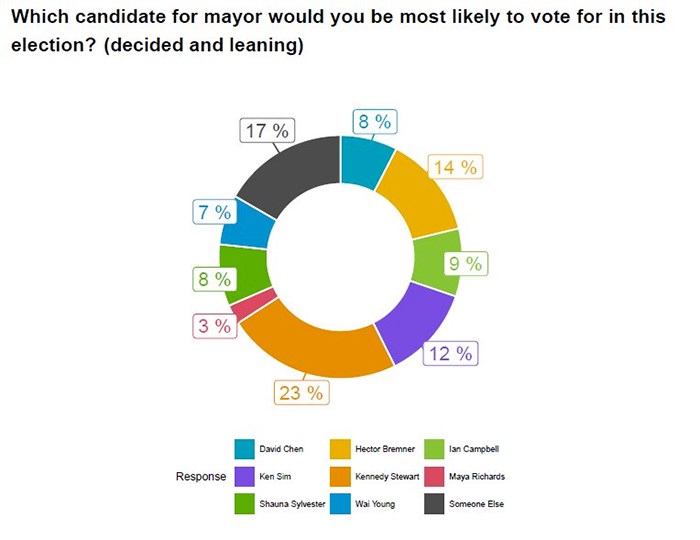 Their poll shows that NDP MP Kennedy Stewart is in the lead. 14.4% of decided voters saying they intend to vote for him.

Strangely they refer to the candidate as "Kennedy" in a headlines in their report, while other candidates in the same headline are referred to by their last names.

The surname "Kennedy" had obvious cred in the political world and his team is using its power to their advantage in their campaign [pan to the KENNEDY ON YOUR SIDE posters on lamp posts in your neighbourhood], flipping it. However it would be nice to see pollsters keeping to standard naming conventions and not offering subtle marketing of candidates.

Anyway, the most interesting thing about their results is that the name Maya Richards is on it. If you weren't paying attention to the election (like 90% of the population), and you received an automated phone call asking who you support, maybe you'd stay on the line and press a button when you heard a random name you liked the sound of.

The name Maya Richards is familiar to people within the currently-ruling party, Vision Vancouver. It belongs to the 19-month-old daughter of Rory Richards, who runs a PR company. Vision is one of her clients.

A few months ago Richards made a post on Facebook announcing the news that her kid was running. It was a joke, of course.

According to the Star, Main Street's CEO Quito Maggi says the name was put on their poll in order to test "social media noise" and see who was paying attention.

It seems to have worked, pointing out the fact that people maybe aren't paying close enough attention. Or, perhaps, a robot making phone calls to hundreds of people is a flawed way of getting a real grip on the sentiment of local voters.

We'll see what the case ends up being as Main Street and others release more polls closer to the election.

Maya will get my vote if she runs, her purity makes her infinity more mature than the candidates running : https://t.co/H4Fas6pEbM : Toddler ends up in Vancouver election poll — and gets 1.1 per cent of support #vanpoli #bcpoli #vancouver #bc #mayaformayor #mayarichards pic.twitter.com/6yXQpAZTlv

That Maya Richards got some support in a recent poll, makes me wonder who is answering pollsters when they call, and whether we can trust polls this time around. (I'd vote for her by the way.) #vanpoli