The top 4 Vancouver mayoral candidates, ranked from least to most smarmy/greasy

An online Twitter poll (conducted by me) has revealed what a small slice of Vancouver voters think of the four front-running mayoral candidates in the Vancouver election.
0
Oct 10, 2018 9:00 AM By: Bob Kronbauer

An online Twitter poll (conducted by me) has revealed what a small slice of Vancouver voters think of the four front-running mayoral candidates in the Vancouver election.

Last night Richard Zussman from Global BC moderated a debate in the West End where the quartet went head to head discussing a variety of subjects including homelessness, bike lanes, the pipeline and (of course) the housing crisis.

I wrote a Twitter thread during the debate, highlighting some of the things the mayoral hopefuls had to say. At the end I conducted a poll asking followers "Who is the least smarmy, least greasy politician?", with the four candidates' names listed as options. I wanted to know who voters feel they can trust. 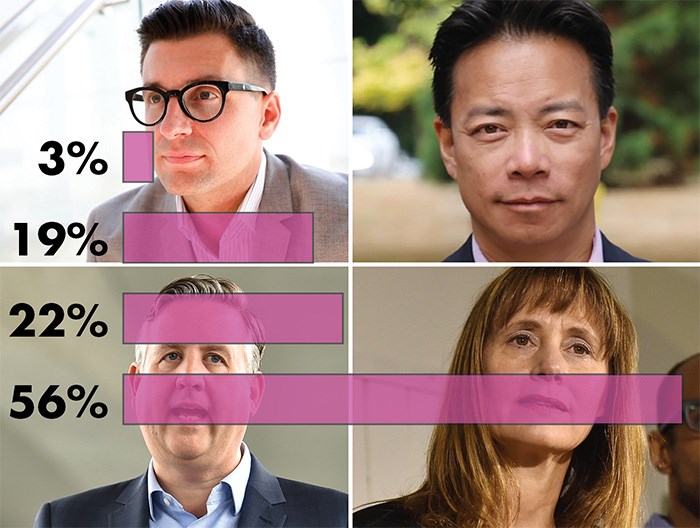 In a Twitter poll, Shauna Sylvester was voted the LEAST smarmy/greasy, with 56% of people saying she was the least. Hector Bremner got 3% of voters saying he was least greasy/smarmy. Ken Sim got 19% and Kennedy Stewart got 22%.

My followers who voted think that Shauna Sylvester is the least smarmy/greasy. 56% of them feel that way.

Kennedy Stewart was voted the second least. 22% voted for him.

Nearly tied with Stewart was Ken Sim at 19%. Mid-range not-too-smarmy-or-greasy.

That leaves Hector Bremner, with a slim showing of 3% saying they think he's the least smarmy/greasy.

This is all according to a stupid poll on Twitter.

Advance voting opens today. Who do you trust to guide your city for the next four years?