This Metro Vancouver building's battle over smoking has disintegrated into spying

Living in an apartment building offers a lot of benefits over residing in a house.

There’s no lawn to cut, for one thing, and it’s generally more affordable. 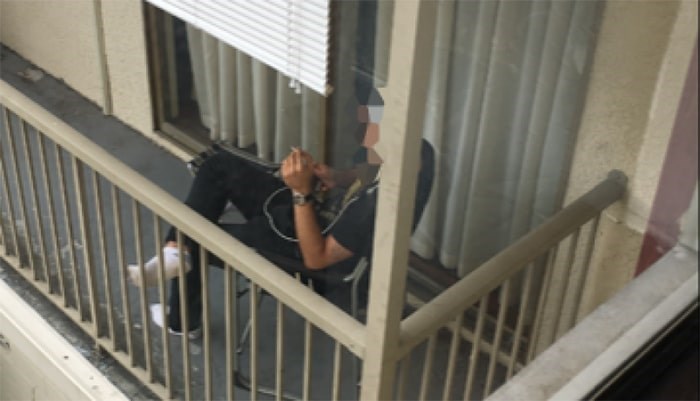 A Burnaby resident has had to spy on her neighbours to catch them in the act of smoking. Submitted photo

The only problem is you have to live so close to other human beings. That’s not always an easy thing to do.

It doesn’t matter if you are in a rental building or a strata, it’s hard for residents to get along.

Why? It’s simple – rules. Some people don’t follow the rules and other people are excessive when it comes to enacting and imposing those rules.

Rules are important, but some are overbearing and impractical. Other rules are smart, but some people refuse to abide by them.

That leads to some insane conflicts, include those that end up in court.

What kind of evidence? How about a Dropbox full of audio files “proving” the excessive noise of this person’s next-door neighbour. Yes, this person is being forced to stay up late recording the noise.

No, I don’t want to embarrass anyone. I’m simply sharing some details to show how crazy these rules fights get (and the type of emails I receive from stressed-out readers looking for me to solve their petty fights, which I can't always do).

Aside from the excessive “partying” of this person’s neighbour, there is the issue of smoking.

Now that is a rule I can get behind. Nobody likes smoking. Smokers are smelly and sometimes dangerous with how they handle their butts. They put an entire building in danger every time they light up. I often wonder if a smoker in my building is going to fall asleep with a lit cigarette and torch the whole place.

The person who wrote me signed a lease that said the building was a no-smoking residence. That, of course, was baloney and this resident has been fighting with neighbours and management ever since.

This person isn’t the only one. An actual petition was started to get management to take this matter more seriously.

There was one section of this email that particularly resonated with me. This tenant caught the neighbours blatantly violating the rules, but got this reaction:

“As recently as today, the tenants in the unit directly below me were on their balcony smoking. I spoke with them and stated, ‘Isn’t this a non-smoking building?’ to which one of the residents, a woman, replied stating, (Building management) said it’s part of my lease that I am allowed to smoke since I’ve lived here a long time, so you need to fucking relax.”

How often have you caught somebody doing something and they don’t even show a hint of guilt?

As you can see from the attached photos, this tenant has been creeping on the neighbours in order gather evidence. Things have really gone off the rails when you have to spend your leisure time doing this.

The tenant also has a conspiracy theory.

“I am actually beginning to wonder if this tenant isn’t friends with the property manager, as she has gotten away with so much that most people probably wouldn’t,” the tenant wrote. “They seem to have no problem evicting other tenants, as I’ve seen eviction notices posted on people’s doors.”

How often have you wondered about the potentially crooked motives of your property manager? It's maddening.

Up next is a possible complaint to the Residential Tenancy Branch.

Good luck with that.