After re-approval of Trans Mountain expansion, most B.C. residents continue to support project

According to a recent survey, 56% of British Columbians agreed with the federal government’s decision to re-approve the pipeline expansion, while 33% disagreed and 11% were undecided.
Mario Canseco
Jul 2, 2019 7:30 AM

The federal government has re-approved the proposed expansion of the Trans Mountain pipeline, in a decision that was widely expected. Public opinion in British Columbia had been trending in favour of the project when Ottawa announced in May 2018 that it was purchasing the existing pipeline and its expansion for $4.5 billion. 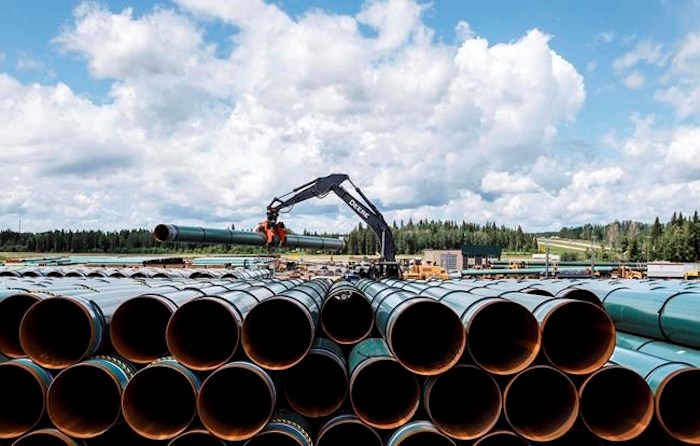 Pipe for the Trans Mountain pipeline is unloaded in Edson, Alta. on Tuesday June 18, 2019. THE CANADIAN PRESS/Jason Franson

In the most recent Research Co. survey, 56% of British Columbians agreed with the federal government’s decision to re-approve the pipeline expansion, while 33% disagreed and 11% were undecided.

The re-approval has not made the project suddenly uncontentious. Our survey also outlined health and safety concerns from residents, a massive expectation of job creation, disappointment with the federal government, and wide skepticism in the Alberta government’s view that a pipeline would undoubtedly bring lower gas prices to British Columbia.

On the political front, only 41% of British Columbians believe the provincial government should do anything necessary to ensure that the Trans Mountain Pipeline expansion does not happen.

What is interesting about responses to this question is that the appetite for more action to stop the project is decidedly higher among BC Green Party voters in 2017 (67%) than among those who cast a ballot for the governing BC New Democratic Party (NDP) (51%). Premier John Horgan’s base may be disillusioned, but not at a level that would oblige carrying on with the battle – especially as more than seven in 10 British Columbians (73%) expect the expansion to create hundreds of jobs.

British Columbians are split on whether the pipeline expansion threatens the health and safety of residents (46% agree and 44% disagree). The level of concern with detrimental side effects is highest among women (56%), residents aged 18 to 34 (58%) and Metro Vancouverites (50%). These are significant proportions, but are well below the level of animosity that the project provoked before it was purchased by Ottawa.

Speaking of the federal government, three in five British Columbians (59%) are disappointed with the way it has handled the Trans Mountain expansion. This includes, unsurprisingly, 95% of those who are “strongly opposed” to the project and 75% of those who are “moderately opposed.” But among “moderate” and “strong” supporters of the project, 50% are dissatisfied with how this file has been dealt with.

Our survey also shows that just 30% of British Columbians recall being exposed to the advertising campaign initiated by the new government of Alberta in an attempt to pressure British Columbia to endorse the pipeline expansion.

Among those who saw the ads, just one third (32%) said they were more likely to support the expansion – a proportion that includes many who already did. The campaign did little to engage with all British Columbians. Recall of the ads is satisfactory among “strong” supporters of the project (47%), but negligible among “moderate” supporters (28%), “moderate” opponents (25%) and “strong” opponents (21%).

In addition, residents are not fully persuaded by one of the key messages of the campaign. While 39% of British Columbians believe that gas prices would be lower in British Columbia now that the Trans Mountain pipeline expansion has been re-approved, 33% disagree and 28% are undecided.

The aftermath of this campaign recalls the 1993 movie Dave, where the title character played by Kevin Kline is impersonating the president of the United States and is desperately trying to find room in the budget for a project. During a cabinet meeting, Dave asks the secretary of commerce why he’s spending on an ad campaign to “boost consumer confidence in the American auto industry.”

This is precisely what the new government of Alberta has accomplished in attempting to engage British Columbians on the Trans Mountain Pipeline expansion. The campaign succeeded in making some residents more supportive of a project that a majority was already supporting.

It would seem that Alberta’s Premier needs to be more like Dave – especially at a time when economic uncertainty continues to affect many families in the province that he actually governs – and leave “war room” theatrics where they belong: in the realm of fiction.

Results are based on an online study conducted from June 22 to June 26, 2019, among 800 adults in British Columbia. The data has been statistically weighted according to Canadian census figures for age, gender and region in British Columbia. The margin of error, which measures sample variability, is plus or minus 3.5 percentage points, 19 times out of 20.

Les Leyne: NDP cuts off debate on major legislation, contradicting calls for scrutiny when it was in opposition
Nov 25, 2021 10:00 AM