An ode to Dr. Bonnie Henry, on guitar and standup bass (VIDEO) 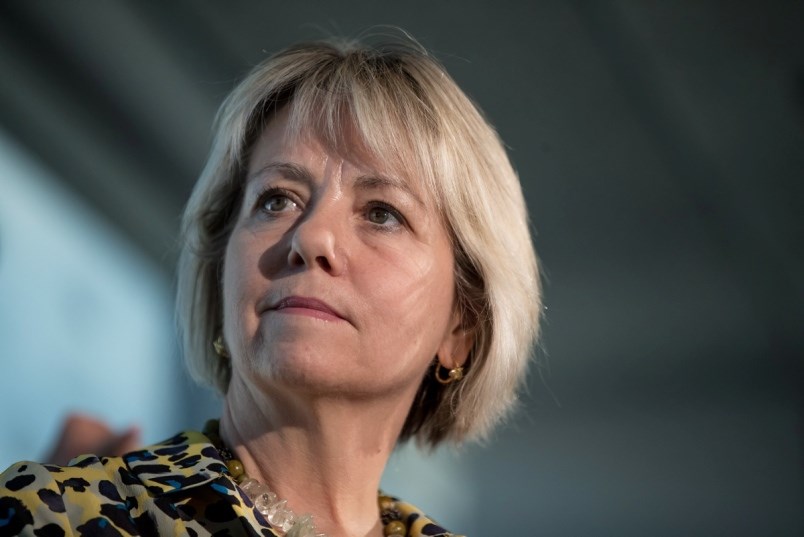 Then Diane Campbell, an acoustic guitar slung around her neck, steps into the frame and, after a bit of banter with her husband, begins to sing her brand-new song.

Delivering the latest in her Fluevog shoes/

With a sense of urgency I learn what I should do/

The song goes on from there to extol Henry’s virtues, her compassion, her reassuring manner, the clear guidance she offers. The lyrics repeat her mantra: Be calm, be kind, be safe.

Much has been made about the emergence of Henry, our provincial health officer, as an inadvertent folk hero. There’s a Dr. Bonnie Henry Fan Club on Twitter. Her daily briefings with Health Minister Adrian Dix are must-see TV.

Campbell’s song is not the only one written about her. In Vancouver, Henry’s image — along with that of federal counterpart Dr. Theresa Tam — was painted on boarded-over windows of a Gastown shop this week.

What’s not talked about as much is the role Henry’s new image has played in fighting the pandemic itself. Simply put, it is largely responsible for keeping us all on the same page.

She has earned British Columbians’ trust, which, in turn, has given them the faith and discipline they need to keep rowing the boat in the same direction, adopting the collective measures required to flatten the curve.

Take Diane Campbell as an example. She took up music — first the ukulele, then the guitar — seven years ago after retiring from a career as a medical transcriptionist. She now leads an acoustic jam in Sidney, and dabbles in songwriting, too.

Last week, she found herself so impressed with Henry that she decided to write one of those songs about her. “It almost wrote itself,” Campbell said Wednesday. She knocked it off in an afternoon.

“She just emits this incredible sense of calm,” Campbell says of Henry. Yes, we know there’s strain below the surface — of course there is — but that just makes Henry’s strength more admirable. “She’s such a great leader in an understated way.”

When Henry tells us steps are necessary, we believe her, Campbell says. “You know she’s not kidding. You want to do what she says.”

What instills this confidence? Credit a combination of credentials and demeanor.

Henry’s bio includes the past two years as B.C.’s provincial health officer, preceded by three as deputy, preceded by years in jobs with titles like medical director of Communicable Disease Prevention and Control and Public Health Emergency Management with the British Columbia Centre for Disease Control.

She was in the thick of the fight against SARS in 2003, and against Ebola, polio and H1N1 at other times. She wrote a book called Soap And Water And Common Sense.

At their daily briefings, Dix, the politician, shrewdly and properly defers to Henry, the scientist, when appropriate. She comes across as informed, logical and honest, and therefore trustworthy. The Christian Science Monitor described her as “a holder of hands for the Canadian public.”

Not everyone is a fan of Henry’s plan, but those dissenters who demand either A) a more draconian lockdown, or B) a relaxation of the rules so that the economy can get moving again risk being burned at the stake as heretics.

Heckling from the cheap seats isn’t welcome, not now, with most people buying into the need for a unified approach.

Will that last? As a society used to immediate gratification, it’s frustrating that our sacrifices — really, it’s only been a couple of weeks — haven’t been rewarded with a definite timeline for an easing of restrictions. In fact, it feels a bit like Alice In Wonderland, where the harder we chase a return to normal life, the farther away it seems to get.

Here’s the reply to that: No one really knows how long this fight will take, but the more rigorous we are in staying the course, the sooner the end will come.

And it’s easier to maintain the course when we feel we’re being led in the right direction. Switching channels from coverage of the White House, Diane Campbell is grateful for the clear, regular communication from both Ottawa and B.C. “Between Justin Trudeau and Bonnie Henry, I’m so glad I’m here.”