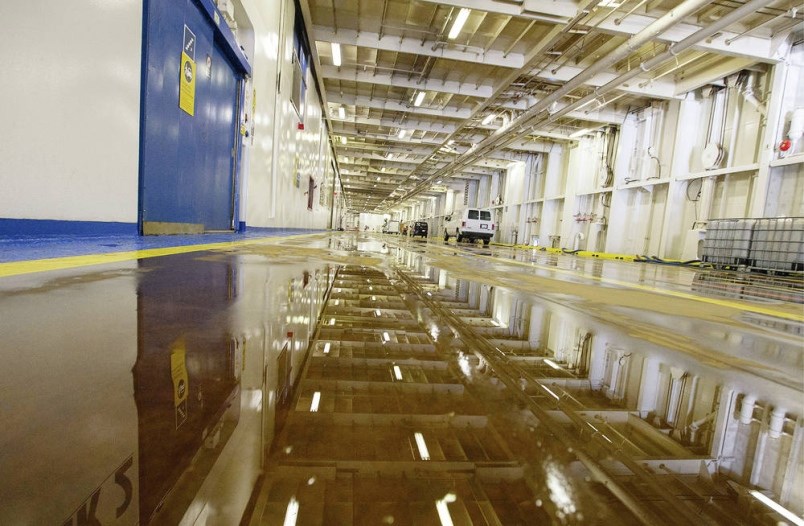 Starting Sept. 30, passengers won't be able to stay in their vehicles on enclosed ferry decks during crossings. Photo by Adrian Lam/Times Colonist

It took six whole minutes for the first car alarm to go off on the ferry.

This was Monday, the noon sailing from ­Tsawwassen to Swartz Bay.

The racket wasn’t enough to chase passengers out of their vehicles, though. It might have been a gloriously sunny late September day, but travellers stayed hunkered in their cars, just as they have throughout the pandemic.

Even in the wholly enclosed bottom deck, you could see people dozing in a third of the vehicles, having chosen the isolation option over sharing the ferry’s seating areas with a bunch of strangers.

Doesn’t matter. As of Sept. 30, they have brought back the rule that bars people from staying in the enclosed decks during crossings. It affects the major Vancouver Island-Lower Mainland routes, plus the Comox-Powell River and Tsawwassen-Gulf Islands ones.

Don’t blame BC Ferries, though. It’s a Transport Canada decision, one that effectively places people’s COVID-19 fears below the risk, however tiny, of a marine disaster – this despite close to 60 years of the ferries safely shuttling back and forth without hitting an iceberg in the Strait of Georgia.

Serious incidents on the affected routes — three died when a Russian freighter plowed into the Queen of Victoria in Active Pass in 1970, and 23 passengers on a Royal Sealink catamaran were hurt in a collision with the Queen of Saanich in 1992 — have been rare.

Conceivably, anyone who refuses to leave their vehicle (remember, this rule only applies to the enclosed deck) could be fined between $600 and $12,000 by Transport Canada, though that would be a last resort, after lots of warning.

You won’t see BC Ferries workers pounding on a car window and demanding to see a driver’s licence, though. Instead, Transport Canada says it will be up to BC Ferries to send details to the federal department, which will decide whether to levy a fine. BC Ferries figures that means sending the licence number and other info on the vehicle in question.

The ban is contentious stuff, just as it was in 2017 when Transport Canada finally pushed BC Ferries into complying with the enclosed-deck regulation, which had been on the books since 2001. The ferry corporation had felt other measures kept it within the spirit of the law, but the feds disagreed.

Transport Canada temporarily lifted the ban in March after the coronavirus arrived, but then announced it would return today. It did so over the objections of B.C. Ferries, which argued the rule should remain suspended until the pandemic ends. “We pushed hard,” Darren Johnston, executive director of fleet operations, said Tuesday. No luck.

She said Garneau’s reply was that sufficient pandemic protocols were in place, and drivers could simply ask to be sent to partially enclosed upper decks instead.

Well, the former astronaut might know a lot about spaceships, but Vancouver Islanders could teach him a few things about ferries.

Like, some drivers will have no choice but to abandon their vehicles. Semis won’t fit on the low-ceilinged upper deck. Ditto for many campers and RVs.

Also, on a full sailing, there’s not room up top for all those who want to stay in their cars, not during a pandemic. When such people can’t be accommodated, they get offered a spot on the main car deck on the next sailing, Johnston said. Most decline the offer and opt for the lower deck, but then there’s the question of whether they actually exit their cars once on board.

(This would be a good place to pause and encourage passengers not to moan at frontline BC Ferries workers. They didn’t write the rules. Also, anyone who abuses a ferry worker could be nailed with a travel ban, though my preferred punishment would be a free buoyancy test for the abuser’s vehicle, preferably in Active Pass.)

Johnston is not without understanding of Transport Canada’s concerns. Even though BC Ferries has never had a catastrophic, fatal fire in an enclosed deck, that doesn’t mean one couldn’t happen. (And let’s not forget the tragedy that led authorities to tighten their rules: the 1994 sinking of a Baltic Sea ferry in which 850 died.)

Still, given the reality of the pandemic versus the slim possibility of what Transport Canada fears, it sure seems the focus is on the lesser risk.