Businesses have laid workers off. Farmers aren’t being paid for produce that isn’t delivered.
0
Feb 24, 2020 7:10 AM By: Times Colonist 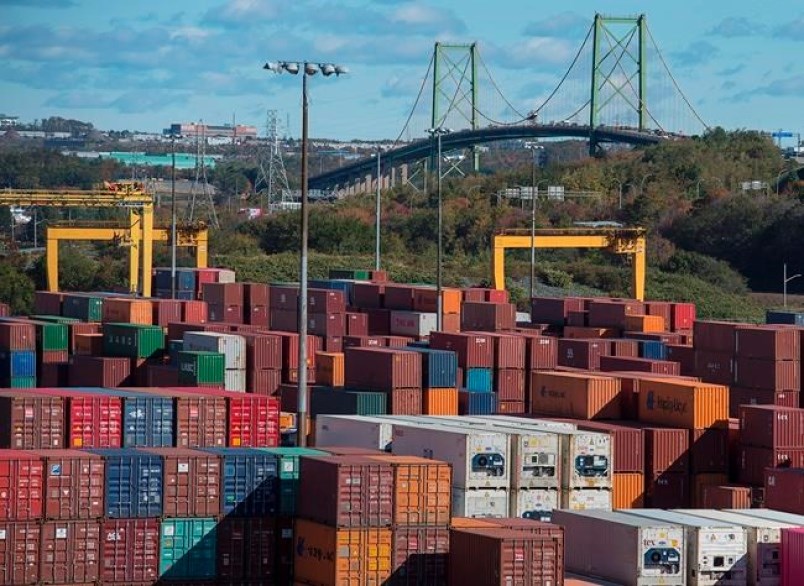 Shipping containers are stacked at the Fairview Cove Container Terminal in Halifax on Friday, Oct. 19, 2018. A major U.S. shipper is turning away from the Halifax port in favour of U.S. harbours due to ongoing blockades that have shut down Canadian National Railway Co.'s eastern network. THE CANADIAN PRESS/Andrew Vaughan

Thank goodness for rutabagas. Blockades have bunged up the country over the past couple of weeks. Protests supporting Wet’suwet’en hereditary chiefs who want to stop the Coastal GasLink pipeline have shut down and delayed train service across Canada, slowing or stopping movement of perishable food, fuel, grain, feedstock, coal and other freight.

All other parts of the transport system are jammed as a result, including the ports of Vancouver, Prince Rupert, Halifax and Montreal.

Economists and business groups say the blockades are already affecting consumers. With few rail shipments getting through, the flow of food and other goods are slowing and prices are rising.

Businesses have laid workers off. Farmers aren’t being paid for produce that isn’t delivered.

It’s much, much worse than the latté-well running dry because the coffee beans are stuck on a ship off the Port of Vancouver or the morning muffin run coming up empty due to grain shipments not making it out of Calgary. If the past few weeks have shown anything, it’s the vulnerability of our food supply.

If this continues, we could find out what life is like at the far northern reaches of Canada, where grocery store shelves often sit bare, thanks to the difficulty and cost of shipping. We, too, could feel the gut clog at being limited to non-perishable, highly processed foods for weeks on end — and the wallet pinch when food shipments do come in.

The way our society, economy and food supply are set up, it wouldn’t take much for us to be in the position of paying $15 for a head of wilting lettuce and $64 for an unripe tomato — and feeling lucky (or something) for the privilege.

Local greenhouses here on the south coast that manage to produce food in the depths of our dark, dreary winters could make a killing — if they can get their food to market. The same farmers might have to hire extra security to keep the scurvy hordes at bay.

We could live our great-grandparents’ typical winter experience. Will the tins and jars of preserves stockpiled in the pantry stretch until the next growing season? Will the weevils beat us to the flour, oatmeal and dried beans? Will the apples, winter squash and root vegetables in the root cellar keep long enough?

What am I saying? Who stockpiles canned and dried goods at home these days? Who has space for a cold room?

We should be thankful for rutabaga.

If the economy shuts down, we’ll still have the trusty yellow turnip — sometimes called a Swede, despite originating in Switzerland — to fall back on.

We’ll also have parsnips, carrots, cabbages, onions, beets, leeks, kale and potatoes — all long-lasting staples of long-ago winters in rural Canada and elsewhere before supermarkets and refrigeration made life easy.

Rutabagas can be stored for up to eight months. Cabbage can last from fall until spring. Even brussels sprouts (so named, despite originating near the Mediterranean) stored properly can last for two months. Fermented as kimchi, sauerkraut or pickles, these veggies last even longer.

Deemed essential to survival 70 and more years ago, many of these veggies are still considered sufficiently important today that they’re regulated in B.C.

I know — weird, right? We regulate doctors, dentists, lawyers, engineers, teachers, accountants and so on. We regulate the airline, banking, telecommunications, mining, oil and gas companies.

And we regulate vegetables. And eggs, chickens, milk, wheat and numerous other foods.

Professions and industries are regulated to ensure public safety — as are foods. Supply-management systems are often put in place to ensure a food-of-interest is never produced to such an abundance that prices collapse and farmers — having lost their shirt for the crop once — decide to never again plant it. The point is to keep the essential food crop sufficiently profitable that farmers continue to grow it, thereby ensuring there is always a crop in case of need.

Because, in the event of fuel supplies running out, long-distance shipping collapsing, fancy lattés becoming mere taste memories and food becoming scarce, we could survive for months on B.C.’s regulated vegetables.

We’d be reliving the lives of our great-grandparents. We’d be getting back to our roots and root vegetables — but at least they’d be there when and if we need them.