"Rich people will always live in Vancouver because it will still be beautiful in thousands of years."
Alistair Vigier Dec 6, 2022 10:32 AM
Listen to this article
00:05:04

At the time, none of the banks were offering mortgages, it was cash only. I wanted to buy multiple properties, but even with 50 per cent cash down, I couldn’t get a mortgage. So I had to spend my entire budget on one.

But while massive discounts were being offered in Phoenix, Las Vegas, and Miami, real estate prices in Vancouver stayed strong.

The reality of Vancouver is that it is possibly the best city in the world, and people who can afford to live mortgage free live there. When interest rates go up, or banks start calling loans, it doesn’t impact those who are debt free. Many debt-free people own properties in Vancouver, while others rent.

If you need a mortgage of $2 million to buy a Vancouver property, that’s currently a monthly payment of $12,429.94, at an interest rate of 5.69% with amortization over 25 years.

Very few people have the income to qualify for that, let alone to be able to afford it. Either you have $2M in cash or you rent. Forget mortgages.

Nothing can crash Vancouver real estate 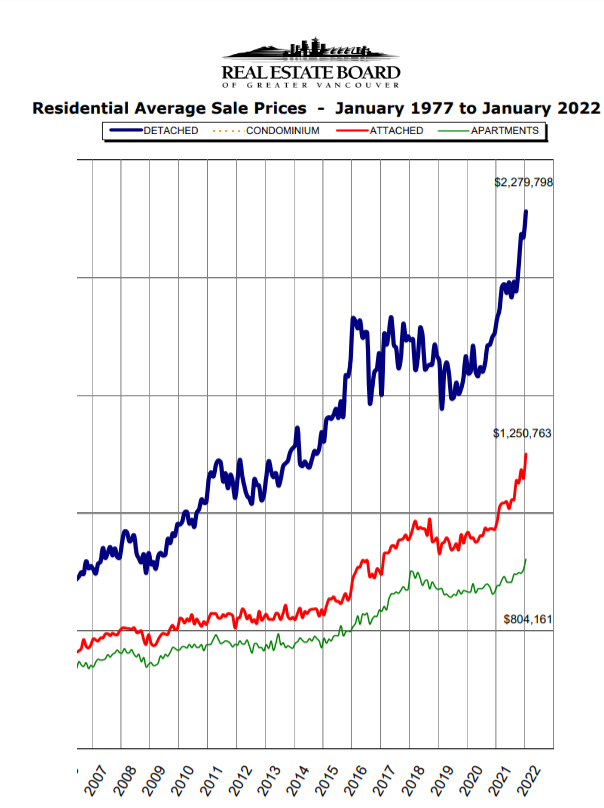 As you can see in the graph, the 2009 financial crash barely had any impact on Vancouver house prices. And COVID-19 actually led to a massive increase in house prices.

So, if you are hoping that the current interest rate hikes are going to lead to a 65 per cent price decline the way it happened in Las Vegas in 2008, you can forget it.

I often read in the news that sales are down around 37 per cent in Vancouver. But that doesn’t mean that property values are down at all. Many people are waiting to list their homes for sale, leading to fewer sales. Actually, the less inventory there is, the higher property values often are. If there are fewer buyers and sellers, prices stay the same.

Many Vancouver property owners that I speak to are very nervous about listing their properties right now. They don’t think there are many buyers out there. Many are waiting until 2023 to see what happens.

I spoke to a couple the other day that was planning to sell their Surrey house and move to North Vancouver, but they decided to wait. The Surrey house was currently rented out, and they were in no rush.

This is a government-induced recession

The crash did not come out of thin air, but the government decided it was time to move from stimulating the economy to cooling it off, in an effort to combat inflation and bring it back to its 2% inflation target. They would have been planning this for at least half a year.

When COVID hit, the government started panicking. The idea was that the entire Canadian economy was going to collapse, and a massive economic stimulus was needed. There was no time to do detailed checks on eligibility for COVID programs. If you say you lost your job, you got $2000/month. If you say you had five employees on the payroll, there was no time to check. The government pumped so much money into the economy that they overdid it, leading to massive inflation.

Some people took their COVID stimulus money and invested it in things like Bitcoin, tech stocks, and real estate. People also were not travelling or going to events, so there was extra money to invest. 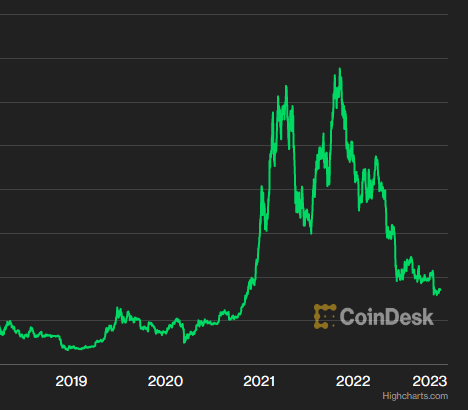 As you can see in the chart, the price of Bitcoin went up greatly once people got their stimulus money starting in late 2020. You will remember house prices were going up greatly in Vancouver during this time too.

But then the Canadian government realized its mistake in 2022, cut all COVID stimulus money, and started increasing interest rates not seen in the last 15 years.

Unlike previous recessions, the Canadian government has the choice to stop this recession whenever they decide to. Of course, there are some external pressures, like supply-chain issues in China, and the Russian/Ukraine war, but it is still the Bank of Canada's choice at the end of the day how aggressively to deal with inflation.

The Bank of Canada will not push the economy and housing market to collapse. If things get too rough, they will hold off. So don’t hope for cheap properties in Vancouver anytime soon, or ever. Rich people will always live in Vancouver because it will still be beautiful in thousands of years.

Alistair Vigier is the CEO of ClearwayLaw.com, an online legal marketplace that connects the public with lawyers. People can leave and review ratings for lawyers in Canada. He also enjoys writing about Vancouver real estate and environmental issues.