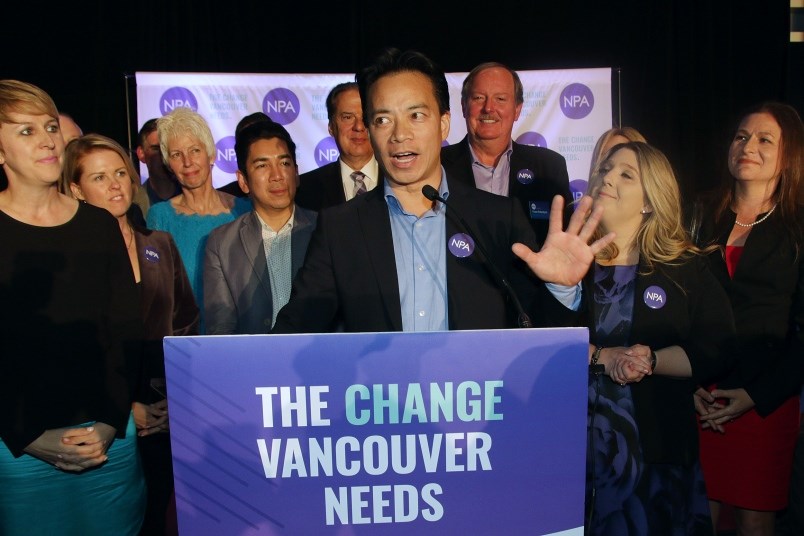 What’s next --  the world’s first commuter zip line across False Creek,  integrated cemeteries which would offer cradle to grave housing developments, or perhaps a drone airport?

With three candidates on the centre-right of the political spectrum and the current mayor on the left already announcing that they will be vying for the mayor’s chair in October 2022, you would think the next civic election in Vancouver was imminent, not 18 months away.

And like any good election, the headline-grabbing promises have already started. Last week, Ken Sim from the ABC Party, aka A Better City (if you believe that), came out of the gate promising to dismantle the Vancouver Park Board. This is a solid wedge issue sure to divide the electorate in half, and clearly resonated with local media, judging by the coverage Sim received. How coming out so early will help him on election day next October is difficult to say. But for better or for worse, the issue will now dominate his campaign, because Park Board supporters are, to put it mildly, energetic, and, to put it not so mildly, rabid.

As we know, the Vancouver Park Board is a unique organization because it is one of the few elected park boards in North America (yes -- others do exist). In the last few years, its governance and management have been tested, to say the least.

Looking back two terms ago, the contentious decision to pave a bike lane through the middle of Kits Park was met with protests and lawsuits. In the end, the Park Board backtracked and since then, nothing new has happened in a popular park desperate for updates. (barring the resurfacing of Kits Pool).

Then, in this most recent term, the Park Board has gone full pedal to the metal on becoming a housing advocacy organization instead of a governance board overseeing the maintenance and preservation of our 200+ park system.

First, Oppenheimer Park and then Strathcona Park became protest zones for housing and homeless advocates. The majority of the elected Park Board made a conscious and public decision to do nothing, choosing to pass the buck to the province on finding a solution for the ever-growing campsites, drug dens, death traps, and what appear to be operation centres for organized crime. Clearly, these decisions divided Vancouverites—many saying it was the right decision and others saying it was wrong. Mainly though, it raised the question of whether the Park Board was a responsible organization that should even exist.

And then, this past week, the Park Board announced that our beloved Aquarium, operated by a non-profit, would be sold to a US-based entertainment conglomerate. This decision raised eyebrows on the competence and management of our parks and so Ken Sim, doing his ABCs, jumped at the chance to make a promise he simply cannot keep -- dismantle the Park Board. Of course, Sim just wants to get elected this time, and being a milquetoast leader simply does not get you the win. Or does it? (ahem -- Kennedy Stewart)

The problem is, like the city, the Park Board operates at the pleasure of, or as an appendage to,  the provincial government. That means the province would need to choose to do this and revise the Vancouver Charter, the city’s regulating document.

The likelihood of the province doing this is slim. The only way they would do it would be if the Park Board asked them to, which means a newly elected Park Board would, as part of their first business, vote to have themselves fired. Sim seems confident he can pull this off. That is -- to get enough of his slate elected to then have them fire themselves immediately after they are sworn in.

But let’s face it: dismantling the Park Board is an unlikely promise, but it gets media coverage and voter support (see noted foibles of the Park Board above). But it is reminiscent of a promise made by past mayoral candidate Gregor Robertson, who in 2008 committed to ending homelessness by 2015. He had no plan on how he would do it, and most credible homelessness experts knew it was b^llsh*t, but why call him out on it when it could be argued doing nothing and saying nothing was worse? Robertson won two elections with that impossible promise. So there is good reason to think Sim could pull off the same BS election victory on an empty promise like shutting down the Park Board.

So, 18 months before election day and the promise bandwagon has begun. Who knows what promise will be next:  a bike bridge to Kits, the world’s first commuter zip line across False Creek, a meandering stream for gondolas from False Creek to Burrard Inlet, a tunnel to North Vancouver, the purchase of the PNE by Disney,  integrated cemeteries which would offer cradle to grave housing developments, a drone airport or maybe a million trees planted by 2026? Your guesses and their promises will be unrolled over the next 18 months. Silly season has officially begun -- several seasons too soon.